In the nine-page document, the so-called “whistleblower” claims that the president was “using the power of his office to solicit interference from a foreign country in the 2020 U.S. election.” While characterizing the Trump-Zelensky call based on hearsay, it accuses the White House of attempting to conceal records related to their conversation. Further, it claims President Trump’s personal lawyer, Rudy Giuliani, is a “central figure” in the effort and alleges U.S. Attorney General William Barr “appears to be involved as well.”

“The interference includes, among other things, pressuring a foreign country to investigate one of the president’s main domestic political rivals,” the complaint states. “The president’s personal lawyer, Mr. Rudolph Giuliani, is a central figure in this effort. Attorney General Barr appears to be involved as well.”

The transcript of the call was released Tuesday, showing no pressure to investigate Biden, and President Zelensky denied in person that he felt any such pressure from the conversation. Nonetheless, following the transcript’s release House Speaker Nancy Pelosi (D-CA) reaffirmed her support for a formal impeachment inquiry, accusing the president of using “taxpayer money to shake down other countries for the benefit of his campaign.”

“Either the President does not know the weight of his words or he does not care about ethics or his constitutional responsibilities,” the speaker added. “The transcript and the Justice Department’s acting in a rogue fashion in being complicit in the President’s lawlessness confirm the need for an impeachment inquiry. Clearly, the Congress must act.”

The so-called “whistleblower’s” complaint was released shortly before acting National Intelligence Director Joseph Maguire appeared before the House intelligence committee to discuss the handling of the complaint. The hearing began at 9 a.m. EDT and is being streamed live.

“This complaint is a roadmap for our investigation, and provides significant information for the committee to follow up on with other witnesses and documents,” Rep. Adam Schiff (D-CA) chair of the House Permanent Select Committee on Intelligence, said in a statement Thursday before the hearing.

Following the complaint’s release, White House press secretary Stephanie Grisham said in a statement: “Nothing has changed with the release of this complaint, which is nothing more than a collection of third-hand accounts of events and cobbled-together press clippings—all of which shows nothing improper.”

Last week, Intelligence Community Inspector General Michael Atkinson appeared before the committee to discuss the whistle-blower complaint in a closed session. It was Atkinson who first received the complaint and thought it serious enough to report to Congress.

The complaint was made available to lawmakers Wednesday and was viewed by members of the House and Senate intel panels.

President Trump and Giuliani have said they encouraged Ukraine in other conversations to investigate the Bidens for pressuring Ukraine to fire Kiev Prosecutor General Viktor Shokin, who was investigating the gas company Hunter Biden worked for.

As Breitbart News reported earlier this year, Biden forced out former Ukrainian prosecutor Viktor Shokin as he was investigating an energy company called Burisma Holdings, which was paying Biden handsomely as a member of its board. The former vice president even boasted to the Council of Foreign Relations last year that he had threatened to withhold $1 billion in U.S. aid unless the prosecutor was fired. (He did not tell the audience about his son’s role.)

On Tuesday, President Trump said he asked White House chief of staff, Mick Mulvaney, to withhold the aid from Ukraine roughly one week before he spoke with Ukraine’s leader.

“As far as withholding funds, those funds were paid,” President Trump said ahead of his address before the United Nations General Assembly in New York City. “They were fully paid.”

“I want other countries to put up money. I think it’s unfair that we put up the money,” he added. “Then other people call me. They said, ‘Oh, let it go.’ And I let it go. But we paid the money, the money was paid.”

Meanwhile, President Trump and his allies appear none-too-worried about the Democrats’ formal impeachment inquiry and have not only suggested it’s a sign that Pelosi has lost control of her caucus, but that it will bolster the president’s 2020 re-election chances.

“[Speaker Pelosi’s] been taken over by the radical left, the whole Democrat Party. You take a look at what’s happening in the media today. The whole party is taken over by the left and thank you very much — my poll numbers have gone up,” the president said Wednesday.

Of the impeachment probe, House Republican leader Rep. Kevin McCarthy (R-CA) told Breitbart News that Democrats “lost their minds” and predicted it will “backfire on them” in the 2020 election.

“The left has officially lost their minds — they are so fixated on their imaginary impeachment that they are getting nothing else done,” said McCarthy. “266 days in power and what have Nancy Pelosi and the Socialist Democrats accomplished? Absolutely nothing.”

On Wednesday, President Trump’s reelection campaign announced  – along with the Republican National Committee (RNC) – that $5 million had been raised following Pelosi’s announcement of the impeachment inquiry.

“$5 Million combined in 24 hrs. Donors in all 50 states Huge groundswell of support leading to Trump landslide in 2020!” he added.

Read the redacted version of the partisan federal employee’s complaint below: 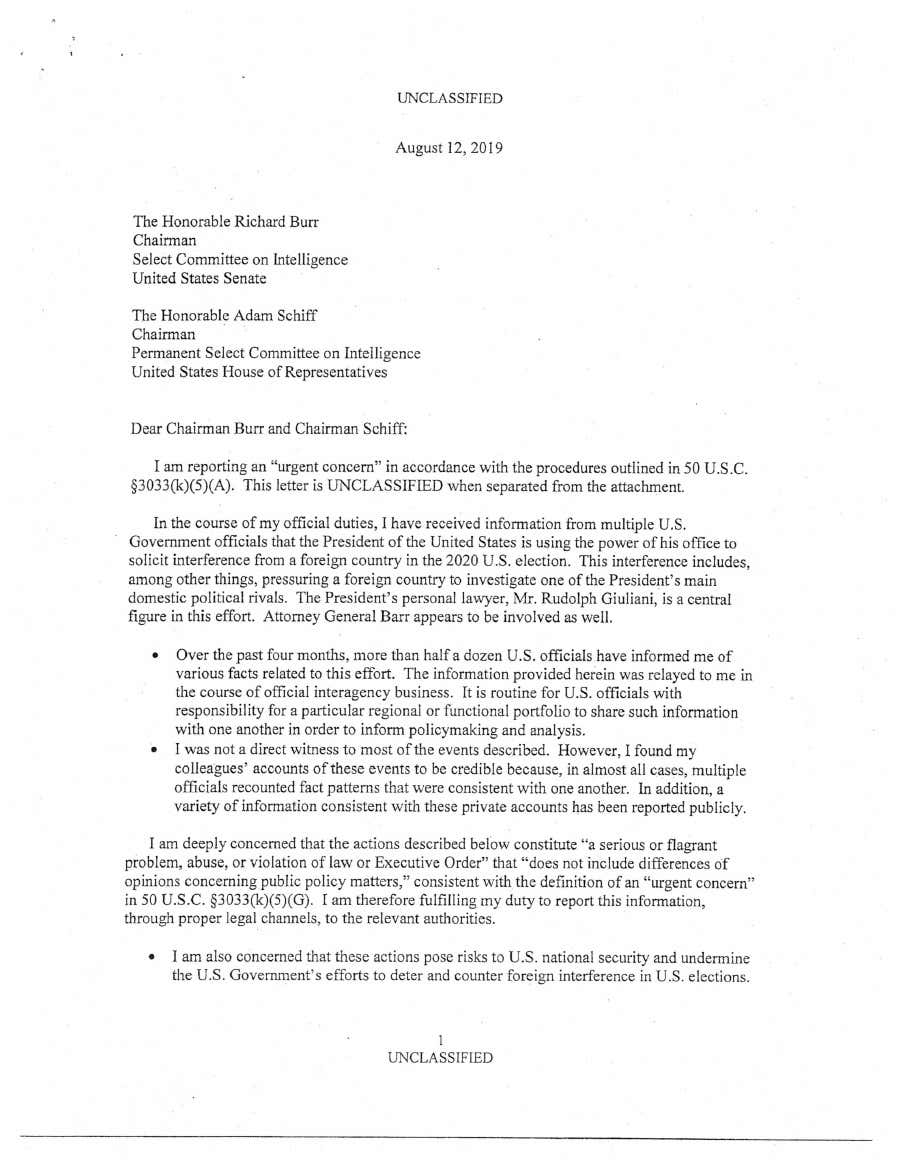