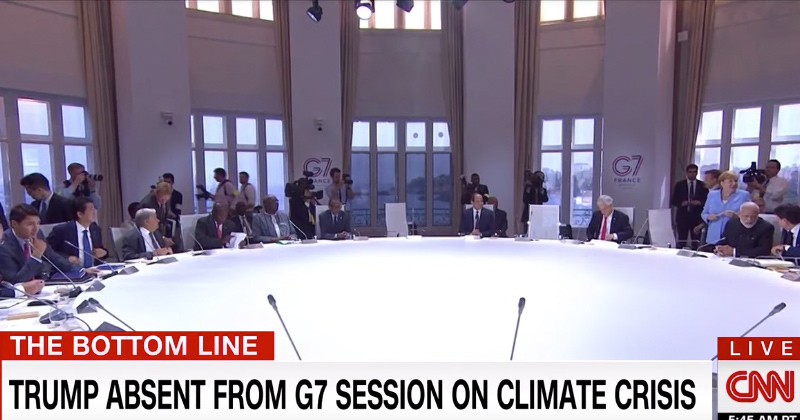 While President Trump rubbed elbows with globalists at G7 in Biarritz, France, he did not attend the assembly’s climate talks.

In one of the conference’s last meetings, various heads of state held discussions addressing the issue of manmade global warming.

Photos circulating show world leaders including Germany’s Angela Merkel, French President Emmanuel Macron and others sitting around a table while a chair in the middle was left noticeably vacant.

White House Press Secretary Stephanie Grisham said the president was busy with other meetings when the climate conference took place, but noted a staffer sat in his stead.

“The President had scheduled meetings and bilaterals with Germany and India, so a senior member of the Administration attended in his stead,” Grisham said in a statement.

While a national security staffer sat in for Trump, CNN’s Jim Acosta criticized the president saying the empty seat was symbolic of the administration’s position on climate change in the past few years.

“We should note to our viewers Prime Minister Modi of India and Chancellor Merkel were at that climate session here at the G7 summit,” Acosta stated. “So we’re not getting a lot of straight answers. Perhaps we’ll get some, perhaps we won’t, at this joint press conference when the president and Emmanuel Macron come out here in just a short while.”

CNN’s editor-in-chief Chris Cillizza was also miffed, but unsurprised by the president’s absence: Donald Trump didn’t accidentally forget the climate change meeting. He didn’t decide he wanted to meet with staff from the governments of India and Germany. He just didn’t want to go. He didn’t want to sit around and be, in his mind, lectured by foreign leaders about how he needs to think and feel about the issue.

Trump has referred the idea of manmade global warming a hoax, and made removing the US from the Paris Climate Accord one of his first acts as president.