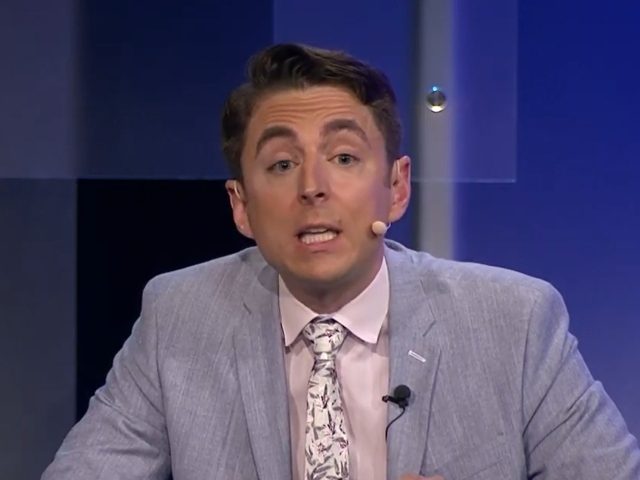 D.C. swamp-creature Berin Szóka sparked outrage on Monday when he tweeted that it would be “poetic justice” if President Trump died of the Wuhan Coronavirus. But who is Berin Szóka?

Szóka is the president of TechFreedom, a non-profit that presents itself as an opponent of “top-down solutions” in tech policy.

The non-profit is deeply tied to Google. Disclosures from the tech giant show that TechFreedom not only receives funding from Google, but it is also part of its Public Policy Fellowship program, which places Google-picked interns at public policy organizations around the world, including TechFreedom.

The TechFreedom president later deleted and apologized for the tweet, saying he would “never wish death upon anyone” and that it “doesn’t represent my organization’s opinion.”

However, the tweet could come back to haunt Szóka, who has attempted in recent years to persuade Republican lawmakers that they shouldn’t use their power to tackle political bias from Big Tech companies.

In 2018, Szóka supplied testimony to a House Judiciary Committee hearing on online censorship arguing that tech companies should not be stripped of their government-backed legal privilege, which renders them immune from lawsuits relating to the removal of certain types of content, as well as lawsuits related to the hosting of content.

Szóka argued that any attempt to tackle Silicon Valley’s well-documented bias against conservatives would be akin to a “fairness doctrine” for the internet.

He has also argued against crackdowns against Big Tech companies for their numerous violations of user privacy, telling the House Energy & Commerce committee in 2012 that “As valuable as ‘privacy’ can be, its value is not absolute.”

Given that Szóka’s job appears to consist of the increasingly difficult task of persuading policymakers not to go after Big Tech, his anti-Trump social media posts may come back to haunt him. As the tweet from Rep. Banks shows, Szóka’s anti-Trump invective is not endearing him to Republican policymakers.

Szóka has not responded to a Breitbart News request for comment.

Anti-Trump network goes into meltdown after Barr confirms no collusion

Will they ever learn?

CNN is responding to the release of the redacted Mueller report with a panel consisting of eight people who all completely agree with each other.

“CNN has 8 people talking about this & they all vehemently agree with one another on every last thing,” tweeted journalist Glenn Greenwald. “This has been a major part of the problem from the start. All humans are more likely to err or worse if they are insulated from challenge or dissent. It’s inherently corrupting.”

“I’ve honestly never seen the type of media meltdown that I’m seeing on CNN. They are so emotionally invested in the storyline that they’ve been pushing for 2+ years and they know what Mueller did to it and how this will forever reflect on them,” he added.

CNN’s credibility is in meltdown following US attorney general William Barr’s confirmation that no one connected to the Trump campaign, and no American whatsoever, colluded with Russia to interfere in the presidential election.

Remember, this is the same media which routinely lobbies Big Tech to deplatform people for “fake news” yet just spent the last 2+ years peddling the biggest piece of fake news in modern political history.

Now watch the best bit from Barr’s press conference when he completely owned a journalist. The YouTube and Twitch star added that he wants conservatives “excised” from the United States.

The popular Twitch and YouTube streamer Destiny, real name Steven Donnell, recently called for “real violence” against conservatives while streaming with a guest.

Donnell, who has grown a reputation for using crass language to describe his views, told his guest that he “hates” conservatives, and has moved on to the “real violence level” when it comes to how to deal with them.

“You really do hate conservatives, don’t you?” Asked his guest during the Twitch live stream, to which Donnell responded in the affirmative.

This striking call for violence is far less vague than the alleged threat used by Big Tech platforms to ban Alex Jones, who was banned from Twitter after he simply encouraged his viewers to sleep “with their battle rifles ready” to prepare for defense.

Donnell, however, continued by saying he believes conservatives should be physically removed from the United States.

“Yeah, I think they need to be excised from my f*cking country. I think they are demonstrably f*cking evil people by any moral system that most people would use,” said Donnell, adding, “I just hate them because they tend to destroy the outcomes related to this country, which is what I’m concerned about, yeah, absolutely.”

Destiny calls for violence against conservatives.

Says he hates them and that "they need to be removed from this country"… pic.twitter.com/cT60YxQQbd

Big League Politics and others have attempted to contact Twitch to understand why Destiny is allowed to advocate violence on its platform. We have not received a response.

Donnell grew an audience streaming popular video games including Call of Duty, League of Legends, and Starcraft. He was previously banned from Twitch for using homophobic slurs and derogatory remarks about the disabled, including use of the words “faggot” and “retard.” He was eventually allowed to rejoin the platform.

He was also banned from Twitter after threatening to bomb a Cox Communications Internet node, though he maintained it was a joke.