Stirring outrage? Isn’t that exactly what the fake news did when they reported false claims as true? 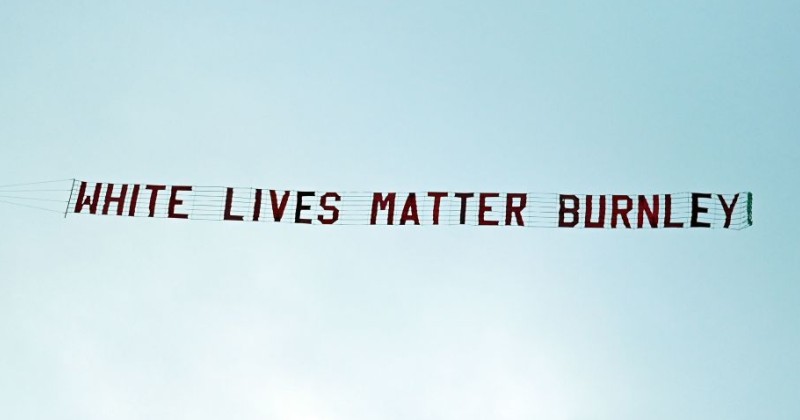 Twitter is experimenting with features that will supposedly help identify tweets containing lies with community help, but the social media giant’s track record of bias and questionable banning standards has users concerned.

Tweets that spread “lies” or “misinformation” will be highlighted for users with a bright-colored warning that is nearly the same size as the offending post, according to a report from NBC News. The changes are supposedly part of a policy revamp at Twitter, scheduled to go into effect next month.

Who are these “community” judges, juries and executioners? “Fact-checkers and journalists” who are verified on Twitter will be the able to decide which tweets promote “misleading” information, though a Twitter spokesperson told NBC that the site will be testing “many different ways” to combat “misinformation.”

A “Community Notes” section also gives users the ability to earn points based on being a “good neighbor,” which is apparently a Twitter euphemism for someone who flags other people’s tweets. Points and community badges could be rewarded to those who act in “good faith” when targeting offending tweets.

The point system is meant to prevent “bad actors” from abusing it. Considering how much political fighting there is on Twitter, odds that this tool will be abused are close to 100 percent, however. 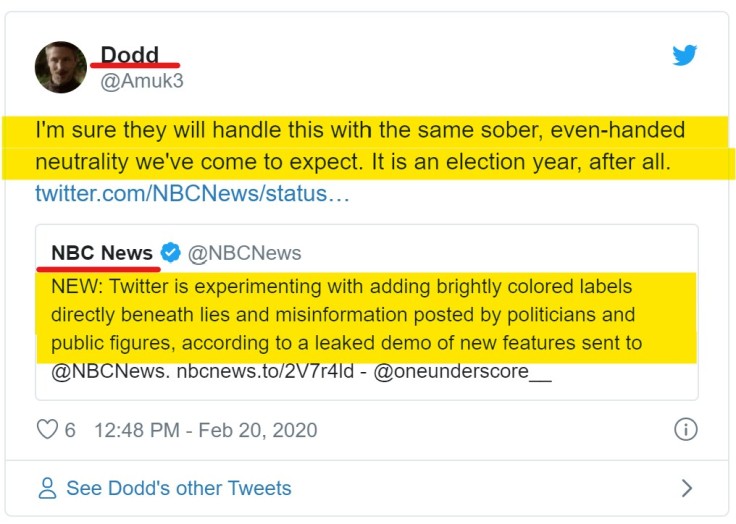 Screenshots from a public testing site show tweets from both conservative and liberal politicians being flagged, as well as tweets denying climate change.

Having been accused of political bias and shadowbanning users with more right-wing beliefs in the past, many do not have faith in Twitter responsibly identifying “misleading” information.

“Can’t wait to see just how much of a disaster this is going to be,” reporter Seth Mandel tweeted in response to the coming changes.

“This should go well,” added commentator and podcaster Stephen Miller.

Twitter already put a new policy in place last month banning tweets that share “manipulated media.” That, however, could mean anything from deep fakes to memes such as that of President Donald Trump giving a medal to the military dog Conan, an obviously humorous and trolling tweet that was quickly “fact-checked” by reporters anyway.

With such precedents, it’s not surprising that many Twitter users fear the new tools could be abused to flag legitimate satire.

kind of fucked up that twitter is already flagging my posts. is anyone else seeing this https://t.co/srbFm28Ijh—
leon (@leyawn) February 20, 2020

Facebook has faced similar criticism for attempts at censorship of what they deem to be harmful content. CEO Mark Zuckerberg even recently set up an Oversight Board, completely funded by Facebook of course, so people can attempt to appeal the social media giant’s decisions on banned content.

Twitter also has a history of trying to punish “wrongthink.” Author Yasha Levine had his account locked after objecting to the US pushing for war with Russia. Actor James Woods only recently returned to the platform after months-long absence, after Twitter locked his account and demanded he delete an offensive tweet.

“If you try to kill the King, you better not miss,” the politically-outspoken Woods tweeted, quoting a line from the famous TV show ‘The Wire’ that paraphrases Ralph Waldo Emerson. Twitter deemed it to be some kind of threat or incitement of violence. 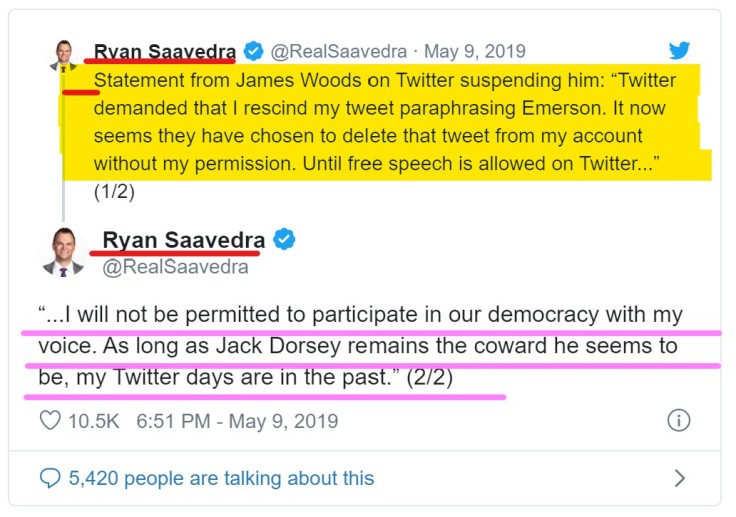 With the new flagging rules and seemingly impossible-to-control policies in the pipeline, it would be no surprise to see even more attempts at thought control, putting a wedge between the social media giant and already frustrated users.

One-third of Americans say the news media is “the enemy of the people,” according to a new Hill-Harris X poll survey.

The poll, released Monday, found that the sentiment is strongest among Republican voters. According to the survey, 51 percent of Republicans polled said they thought of the press as “the enemy of the people” compared with 14 percent of Democrats and 35 percent of independents who said the same.

A majority of all respondents overall signaled support for the press, with 67 percent saying that the “news media is an important part of a democracy.”

Truly hilarious wording for that last line. Most people “support” the press because they think that the “news media is an important part of a democracy.”

I believe the news media is an important part of democracy but am aware as a matter of record that the controlled media is literally the enemy of the people. They view themselves as our enemy and act as an occupying force working to subdue any plebs who dare to fall out of line. 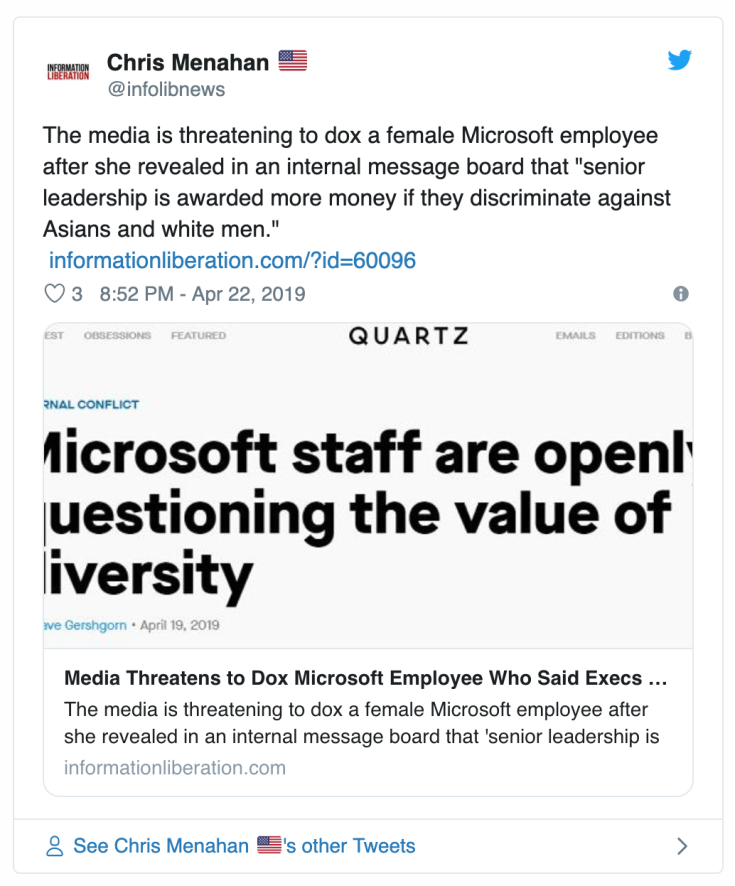 Recognizing the reality of the situation doesn’t mean you’re against “the press” in its entirety, it means you’re informed.

Among those surveyed, respondents were most closely divided on the issue in rural areas. Forty-six percent of rural Americans said they believed the news media to be the “enemy of the people,” compared with 54 percent of those who said the news media is a crucial part of democracy.

Our media is now mostly dedicated to lobbying for alternative media to be deplatformed, doxing dissidents and ruining random people’s lives for crimes against liberal orthodoxy.

They’re at the point now where they’re demanding everyone who make fun of Democrats be doxed, fired from their jobs and even criminally prosecuted.

Democrat Rep. Frederica Wilson (FL) says that people who are “making fun of members of Congress” online “should be prosecuted” pic.twitter.com/f69KwOeJ0n

If anyone doesn’t realize this is a hostile enemy force then they’re not paying attention.