The pioneer cable news network is getting crushed in the ratings, coming in below Home and Garden TV, and has recently downsized and changed freelance payment terms – but shows no interest in changing the tone of its programming.

Both CNN and MSNBC have allowed themselves to be defined by hostility to both the administration and President Donald Trump personally since the 2016 election, breathlessly pushing the ‘Russiagate’ conspiracy theory.

While this strategy has largely worked for MSNBC – at least until special counsel Robert Mueller was forced to admit Russiagate was bogus – CNN has struggled to attract an audience beyond those trapped at hospitals and airports.

Nielsen TV ratings for May show Fox News dominating for the 35th straight month with 1.3 million total day viewers, MSNBC lagging behind with 909,000, and CNN in the eighth place with 552,000.

CNN wasn’t even in the top 15 primetime spots (for comparison, HGTV came in fifth), and its three main primetime shows – hosted by Chris Cuomo, Anderson Cooper and Don Lemon – ranked 25, 26, and 35, respectively.

Could this have anything to do with the network’s obsession with Trump and his administration that no longer bothers hiding naked partisanship? No way, says CNN leadership, insisting they are “real news” and claiming to be victims of Trump’s “attacks” on “free press.”

CNN's Jim @Acosta: "Pres. Trump gave fact-checkers quite a workout today as he opened up a fire hose of falsehoods on special counsel Robert Mueller. That performance came after the President appeared to accidentally concede that the Russians helped him win the 2016 election." pic.twitter.com/C033Hhg8Qz

In the real world, CNN offered buyouts to 100 or so people at its Atlanta, Georgia headquarters, earlier this month, including CNN International executive vice president Tony Maddox. Since then, it has also laid off a number of people from its Health division and drastically cut back production at its London bureau.

Furthermore, the network’s parent company Warner Media recently sent out a notice to contractors that it is changing payment terms beginning in June, from 30 days to 90 days – essentially asking anyone it contracts to wait three months to get paid. 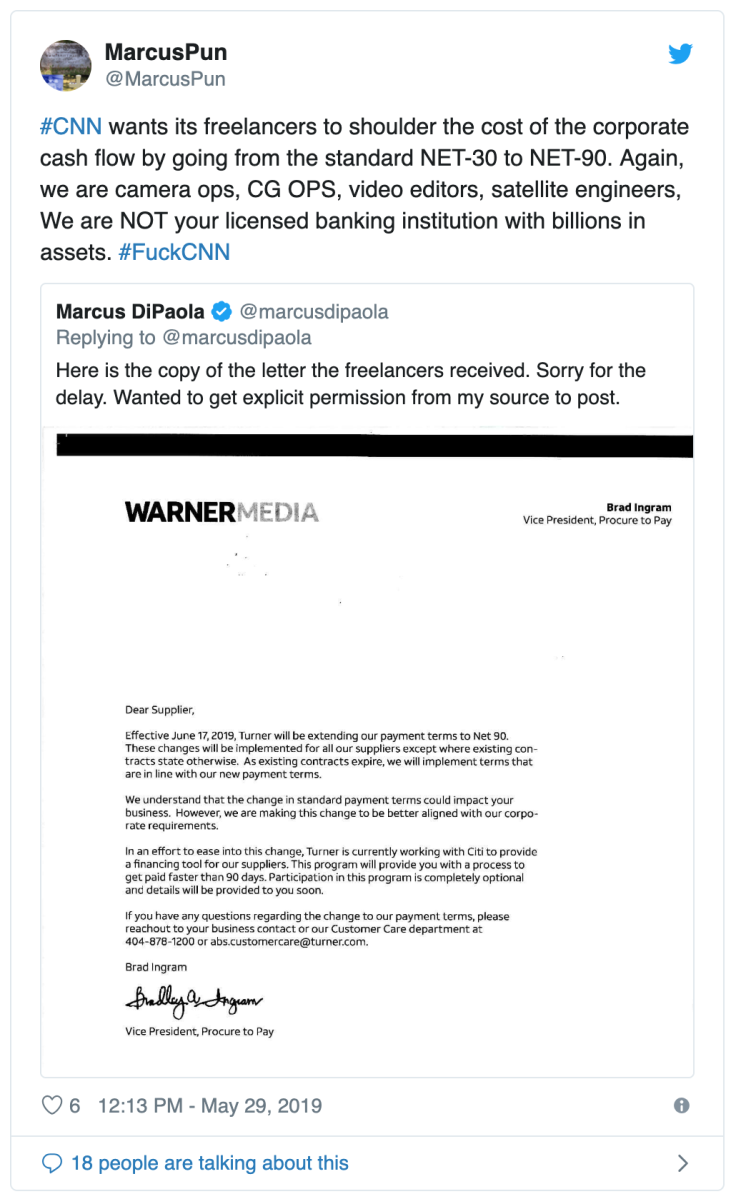 But hey, have you heard that the US government now owns a condominium in New York City’s Trump Tower, because of the Mueller probe? Priorities, people!

The twist is that CNN boss Jeff Zucker is laughing all the way to the bank, because CNN’s annual profits have doubled to $1.2 billion during his tenure. Some 70 percent of the network’s revenue comes not from advertisers but from carriage fees charged from cable and satellite operators. Some 90 million US households pay these fees every year, effectively subsidizing CNN and giving the network very little incentive to change its ways.

The Liberal political wing violently rushed to decry an awful statement from President Trump… without checking to see if he ever actually said it.

The vast majority of the 23 pages that were banned supported Italy’s currently governing coalition made up right and left wing populist parties La Lega (The League) and the 5-Star Movement (MS5), Italy’s La Stampa reports.

Facebooks cited ‘hate speech’ and ‘divisive content’ regarding vaccines, immigrants, and Jewish people as justification for the drastic move.

Apparently, the tech giant’s decision to ban these pages was informed by a report which was created by a leftist NGO by the name of Avaaz, which claims to focus on environmental campaigns and what they regard as ‘human rights’.

A spokesperson from Facebook commented, saying, “We thank Avaaz for sharing its research so we could investigate…We are committed to protecting the integrity of the EU elections and around the world. We have removed a series of false and duplicate accounts that violated our policies on the subject of authenticity, as well as several pages for violation of the policy on changing the name.”

“We have also taken action against some pages that have repeatedly spread misinformation. We will take further measures if we find other violations,” the spokesperson added.

In Avaaz’s report, which was presented to Facebook earlier this month, the NGO claimed that it had discovered 14 Italian networks operating on social media platform which included 104 pages, 6 groups, with a reach of more than 18.2 million individual users.

Of these networks, actions taken by Facebook this week targeted 23 of its pages – totaling nearly 2.45 million individual users and 2.44 million interactions over the past three months.

On top of this, Facebook has also apparently ‘weakened’ pages that it has arbitrarily deemed to be spreading content containing ‘fake news’ – presumably limiting their visibility to Facebook users.

Facebook asserts that its primary motivation for banning these pages was that the page creators had initially chosen page themes which didn’t cite any involvement with political parties or movements, but which had later switched the themes.

Included among the banned pages are ‘Lega Salvini Premier Santa Teresa of Riva’, ‘We want the 5-Star Movement in government’, which had 129,000 followers and nearly 700,000 interactions in just three months, ‘Lega Salvini Sulmona’ — which had 307,000 followers – ‘We Are 5 Stars’, as well as ‘Beppe Grillo for President’.

Facebook’s most recent efforts in Italy to influence this May’s European elections are only the tip of the iceberg, according to Italian media.

Earlier this month, Facebook opened up a ‘war room’ in Dublin, Ireland with 40 teams of full-time engineers, researchers, threat specialists, scientists, and experts for each country who devote their efforts to the European electoral campaign, according to the Italian La Repubblica.

Apparently, there are 500 individuals working on the elections, with the help of 21 so-called ‘fact checkers’, working in 14 different languages.

On Wednesday as the House Judiciary Committee discussed whether to hold Attorney General William Barr in contempt of Congress for refusing to release an unredacted Mueller report, Rep. Matt Gaetz (R-WI) explained how the progression of Democrat’s push for more info on the Mueller report aligns with “the five states of grief.” “This is all about impeaching the President,” Gaetz said. (Full Speech) 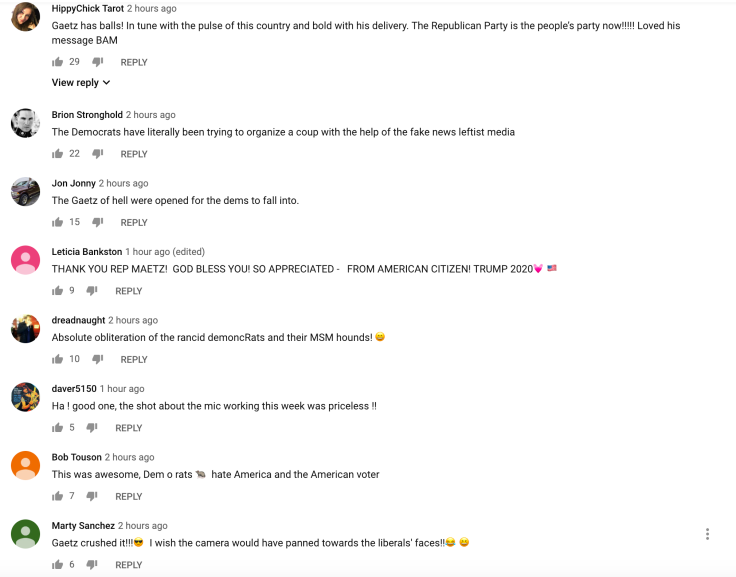 Compares removing accounts to a game of whack-a-mole

While anti-establishment voices are silenced, technological advancements are being made that will bring “fake news” to a whole new level. Who will remain to challenge it?

Censorship is ramping up around the world as mainstream news outlets rally for “regulations” on the first amendment.

While anti-establishment voices are silenced, technological advancements are being made that will bring “fake news” to a whole new level.

Artificial Intelligence systems are currently being developed that will “deep fake” news articles, just as photos and videos have been infamously faked.

In a little-noticed story in July of 2017, it was revealed that a Google grant of €706,000 was given to the United Kingdom’s Press Association to use artificial intelligence to write news articles.

As reported by the Guardian, RADAR will “…auto-generate graphics, video and pictures to add to stories.” 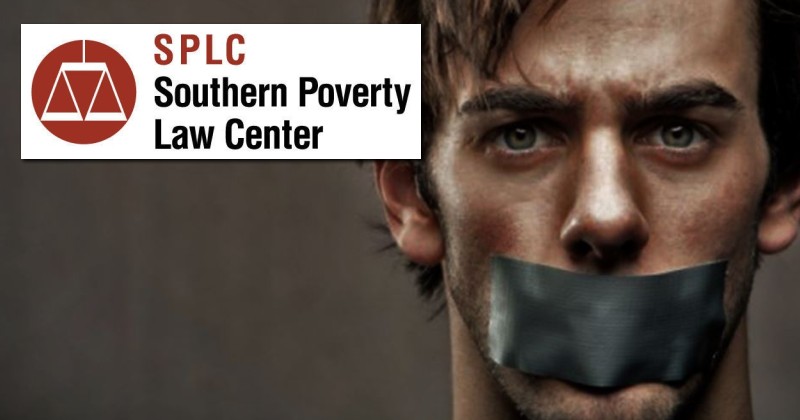 A journalism institute released a “blacklist” of media outlets they deemed as “unreliable” that was created by an employee of the left-wing Southern Poverty Law Center and overwhelmingly contains conservative new media outlets.

The study notes it trimmed the list “by removing several sites whose stories, though highly politicized, were mostly not fake: alternet.org, cato.org, heritage.org, nationalreview.com, thedailybeast.com, the intercept.com, thinkprogress.org, and weeklystandard.com.”

A majority of the removed sites lean left. Of the removed conservative sites, the Heritage Foundation, a think tank – and not in itself a news site — was taken off the list. However, the Daily Signal, which is hosted by the Heritage Foundation, is included on the list. Another conservative site that was removed from the list, the Weekly Standard, was shuttered in December.

While most of the sites are labeled as “unreliable”, “fake”, or “conspiracy” – or a combination of the three — the Free Beacon is listed as “bias”, a label that prompted further review of the sites that were ultimately removed from the list upon further review and before its release.

Barrett Golding, an employee at the Southern Poverty Law Center, a far-left nonprofit embroiled in controversy over accusations of internal racism from its top management that led to its co-founder, Morris Dees, and president, Richard Cohen, being ousted from the group, created the list for Poynter.

Golding appears to have followed the SPLC “list” model in its creation of “unreliable” news sites, as many of the mainstream conservative sites on the list are thrown in with actual sites that push conspiracy theories. This mirrors the SPLC’s “hate group” list, which contains mainstream conservative organizations alongside racist organizations such as the Ku Klux Klan. The SPLC’s “hate” list, which it is perhaps best known for today, has helped the controversial — and allegedly internally racist group itself towards its black employees – to garner more than $500 million in total assets, $120 million of which is parked overseas.

“These sites stood next to conservative organizations like Alliance Defending Freedom, which represented baker Jack Phillips in the Supreme Court case Masterpiece Cakeshop v. Colorado Civil Rights Commission,” Newsbusters writes. “While the ADF is not a news site, it was likely targeted because Golding works for the SPLC. The ADF is considered a ‘hate group’ by the SPLC and is marked on the ‘hate map.’ The Washington Post even questioned SPLC’s ‘political activism’ and ‘bias.'”

“SPLC has been dropped by Twitter from its Trust and Safety Council and slammed by the mainstream media after multiple scandals rocked the organization. Its hate map even helped shooter Floyd Lee Corkins find the location of the Family Research Council, where he shot and wounded five people.”

Factcheck.org, Fake News Codex, OpenSources, and PolitiFact were also involved in the study alongside Golding.

Former CIA Director John Brennan says that President Trump’s accusations of a Deep State coup attempt against him are nothing more than “sociopathic ramblings.”

“I don’t think it’s surprising at all that we continue to hear the sociopathic ramblings of Mr. Trump claiming that there was this effort to try to prevent him from being elected or to unseat him,” Brennan said on MSNBC Friday.

“I welcome any type of, you know, continued investigation in terms of what we did during that period of time when we were in government.”

“And I’ve testified in front of Congress, and I’d be happy to do it again,” he added.

“So, I really say, now we have to get down because this was a coup. This was an attempted overthrow of the United States government,” Trump said.

“This was a coup. This wasn’t stealing information from an office in the Watergate apartments. This was an attempted coup. Like a Third World country. Inconceivable.”