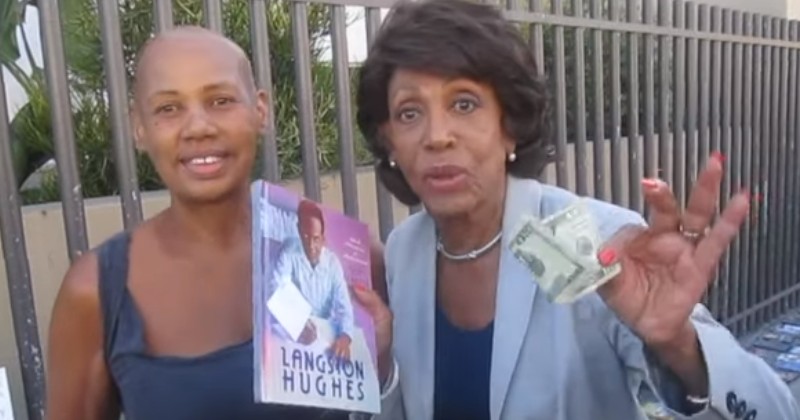 While visiting LA’s poverty-stricken Skid Row, Congresswoman Maxine Waters made sure to ask for her $10 dollars in change back after buying a book from a homeless person.

“Waters visited the desolate on the corner of 5th and San Pedro in the heart of the city’s Skid Row, where she touted a $13 billion bill known as the “Ending Homelessness Act,” reports the American Mirror.

Along with Rep. Al Green and a gaggle of her staff, Waters visited a “tent protest” organized by homeless activist Stephanie Arnold Williams.

“I put all these tents here, with my own money,” Williams said. “Free sewing for the community. I do high-blood pressure readings. I give shade … and a place to sit.”

After purchasing a book from Williams and forgetting her name, Waters seemed overly concerned about getting back the $10 she was owed by the homeless person.

“And she’s so creative. She set up a really nice environment here, but she’s got all these educational books. And guess what? I bought the … Langston Hughes book, $10,” Waters said, waving around a $20 bill. “I need change.”

Well, that was awkward. 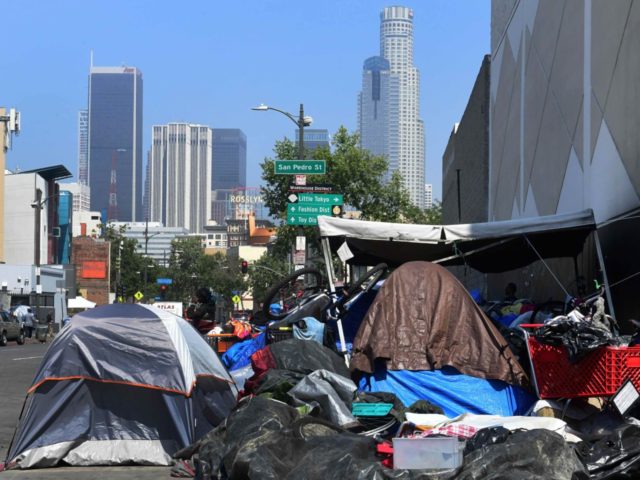 Dr. Drew Pinsky said Friday that Los Angeles faces an imminent outbreak of bubonic plague because of the growth of the homeless population and the failure of state and local authorities to deal with rodent problems.

Dr. Drew made his comments during a Periscope broadcast by Dilbert cartoonist Scott Adams, who has become a popular political pundit with a daily live audience of thousands of people.

Dr. Drew told Adams that he had predicted the recent typhus outbreak in Los Angeles, which was carried by rats, transferred by fleas to pets, and from pets to humans.

Bubonic plague, Dr. Drew said, like typhus, is endemic to the region, and can spread to humans from rodents in a similar fashion.

Though commonly recognized as the medieval disease responsible for the Black Death in the fourteenth century, which killed one-third of the population of Europe, the last outbreak of bubonic plague in the U.S. was nearly a century ago, from 1924 to 1925 — also in Los Angeles. Only a “heroic effort” by doctors stopped it, Dr. Drew recalled, warning that conditions were perfect for another outbreak of the plague in the near future.

Los Angeles is one of the only cities in the country, Dr. Drew said, that has no rodent control plan. “And if you look at the pictures of Los Angeles, you will see that the homeless encampments are surrounded by dumps. People defecate there, they throw their trash there, and the rats just proliferate there.”

Moreover, he said, homeless people were defecating directly into city drains, which flowed to the Pacific Ocean. “We have the sewage of 60,000 people hitting the ocean every day,” he said.

Though there were adequate financial resources, Dr. Drew said, homelessness would not be solved by building more housing, because the fundamental problems were mental illness and drug addictions, which created an “attachment to this lifestyle” on the streets.

The city had been successful at absorbing hundreds of thousands of “undocumented immigrants,” Dr. Drew observed, which showed that the focus on housing was a “hoax.”

But changes in mental health policy — partly as a result of public reactions to films like One Flew Over the Cuckoo’s Nest, which was harshly critical of mental health institutions — had made it much more difficult to commit people to institutional care.

Dr. also said that prison reform initiatives, such as Proposition 47 of 2014– which reduced sentences, but without improvements to rehabilitation — had also played a role by letting more criminals out on the street, some of whom joined the homeless population.

And efforts at relocating the homeless — either to treatment or to prison — ran into lawsuits from the American Civil Liberties Union (ACLU), whom Dr. Drew described as “do-gooders” without any idea about how to solve the underlying problem.

“How many people must die before you change your philosophy?” Dr. Drew asked, rhetorically.

Some, Dr. Drew said, said that the situation in Los Angeles was approaching a national emergency that would require the intervention of the Federal Emergency Management Agency (FEMA), the Red Cross, and the National Guard. He said that he himself had not reached that conclusion yet, but that he was “ready to pull that trigger if we start to see the diseases that I think we are going to.”

“I have a government that is ignoring the basic needs of human civilization,” Dr. Drew said, exasperated.

A recent count of the homeless population revealed that it had risen 12% over the last year, to nearly 60,000 people. Mayor Eric Garcetti, who promised to end homelessness when he first ran for office in 2013, has failed to deal with the problem despite local tax hikes to provide additional revenues. He now faces a recall effort over his failure.

San Francisco’s drug addicts now outnumber high school students as it was revealed that the city handed out a record 5.8 million free syringes last year – about 500,000 more than in 2017.

Despite spending an extra $1.8 million dollars last year in an effort to retrieve used needles, the government handed out about 2 million more syringes than it got back.

Despite new Mayor London Breed’s promise to clean up the city, 9,659 calls complaining about needles littering the streets were received in 2018, an increase of a third on 2017.

The number of complaints about feces on the streets has also tripled since 2011.

The disconnect between San Francisco’s tech elite and the homeless junkies who camp on its streets was emphasized in a tweet by Erik Finn showing starving, jobless homeless people huddled outside a “robotic coffeebar”.

Investor Bill Blain also expressed horror at what he witnessed during a recent trip to San Francisco, writing, “The squalor we saw in The City was frightful.”

“San Francisco has always been one of my favourite US cities, but the degree of homelessness, mental illness and drug abuse we saw on this trip was truly shocking,” writes Blaine, adding that his liberal friends shrugged it off as always having been that way, ignorant of the fact that it is clearly getting worse.

“I found it quite shocking the number of folk sleeping rough on the sidewalks, the smell of weed and drug impedimenta everywhere, the filth, mental illness and degradation on view just a few meters from the financial centre driving Silicon Valley,” said Blaine.

“It’s a city where the destitute seem to have become invisible to the Uber hailing elites. We found ourselves hopping on one of the beautiful F-Route Trolley Buses to find nearly every seat occupied by someone lugging around their worldly possessions around in a plastic bag. It was desperately sad,” he lamented.

As the video below documents, San Francisco is perhaps the prime example of what leftist nihilism mixed with virtue signalling eventually does to a city.