Paul Ryan would not support President Donald Trump and refused to campaign with Donald Trump.

Paul Ryan repeatedly promised to fund the Trump Border Wall.
But at every opportunity he denied the Republican President funds for his border wall.

It was not until President Trump threatened to shut down the government the Speaker Paul Ryan FINALLY pushed legislation that included ONLY $5 BILLION to fund the border wall.

President Trump promised to build a border wall with Mexico at nearly EVERY campaign stop he held in 2015-2016.

The president won the election in an electoral landslide with a promise to build a border wall with Mexico.

It was all a lie.

Paul Ryan did not once include funding for the Trump border wall in any financial package since Trump’s election — until Trump threatened a shutdown.

Paul Ryan and Mitch McConnell lied.
But they did fund a border security barrier in Tunisia and Jordan.

On Wednesday Breitbart.com released the latest segment of their interview with President Donald Trump.

President Donald Trump is not happy that former House Speaker Paul Ryan blocked subpoenas of people and entities Trump thinks the House GOP should have been investigating during the first two years of his administration.

Trump told Breitbart News in an exclusive lengthy Oval Office interview that Ryan blocked issuance of subpoenas to people he thinks should have been investigated on the political left, and now that the Republicans no longer have the majority in the House, people Trump says Ryan protected may have gotten away with whatever they did that warranted investigation.

Trump said that House Freedom Caucus Chairman Rep. Mark Meadows (R-NC) and his predecessor and fellow conservative Rep. Jim Jordan (R-OH) wanted to be tougher with the left, but that Ryan would not let them.

“Paul Ryan wouldn’t give the right to have any subpoenas,” Trump told Breitbart News. “Okay? Now in all fairness, Meadows and Jordan and all these guys, they wanted to go tougher, but they weren’t allowed to by leadership.”

Trump’s comments came in a wider part of the conversation about how the left is more “vicious” than the right—and that the left in American politics plays “cuter and tougher.”

Update: As one might expect, President Trump has chimed in on twitter, where he slammed McCabe for giving Hillary Clinton a pass and accused the former deputy director, who admitted to lying to the DOJ’s inspector general, of giving “Hillary a pass.”

And as Breitbart’s Sean Davis reminds us, Trump’s criticisms are very much justified.

“I was speaking to the man who had just … won the election for the presidency and who might have done so with the aid of the government of Russia." Former FBI acting director Andrew McCabe, Sunday on 60 Minutes. https://t.co/IVwcM11BGc pic.twitter.com/m6HwHMOqY9

Trump Jr. took the attack one step further, accusing McCabe of trying to orchestrate a “deep state coup” against his father, before declaring that it’s time that somebody should “investigate the investigators.”

And though Rosenstein has already announced his plans to resign from the DOJ after William Barr has been confirmed, Freedom Caucus leader Mark Meadows is renewing the call for him to resign immediately following McCabe’s revelations.

In his first interview about the Russia probe since he was summarily fired by President Trump just 26 hours before he was set to retire and collect his pension, and while the possibility of criminal charges over his attempts to cover up his leaks to the press, former Deputy FBI Director Andrew McCabe sat for an interview with CBS about the early days of the Russia probe. 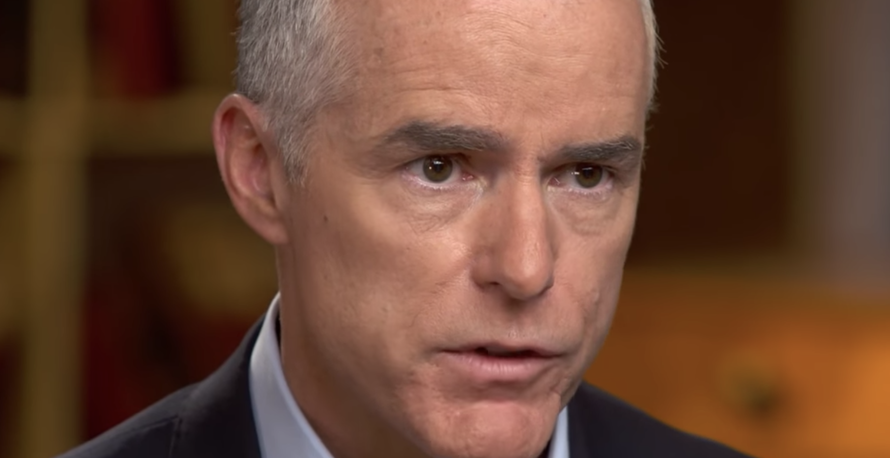 In an excerpt of the full interview, which is set to air on Sunday, McCabe described how he quickly moved to start the Russia probe a day after meeting with Trump in May 2017 in the days after James Comey‘s firing, over fears that he would soon be fired. After authorizing the investigation into Trump’s Russia ties, McCabe sought to ensure that the investigation – which was eventually rolled into the probe eventually taken over by Special Counsel Robert Mueller – would be on “solid ground” even if he was booted from the FBI.

“I was very concerned that I was able to put the Russia case on absolutely solid ground in an indelible fashion that were I removed quickly or reassigned or fired that the case could not be closed or vanish in the night without a trace,” McCabe told CBS.

The interview marked the first time McCabe has ever opened up about his thought process when he launched the probe. In his recounting of his conversation with President Trump, McCabe said he felt intimidated by the president.

He compared Trump’s request that McCabe allow him to visit the FBI – a visit that McCabe suggest would have been well outside the bounds of decorum – to tactics used by Russian mobsters that McCabe had once prosecuted.

“In this moment, I felt the way I’d felt in 1998, in a case involving the Russian Mafia, when I sent a man I’ll call Big Felix in to meet with a Mafia boss named Dimitri Gufield,” McCabe wrote. “The same kind of thing was happening here, in the Oval Office. Dimitri had wanted Felix to endorse his protection scheme. This is a dangerous business, and it’s a bad neighborhood, and you know, if you want, I can protect you from that. If you want my protection. I can protect you. Do you want my protection? The president and his men were trying to work me the way a criminal brigade would operate.”

Of course, nobody in the mainstream press has pointed out that the timing of McCabe’s decision to launch the probe would suggest that he was looking for leverage to stop him from being fired along with Comey…though, thanks to his decision to lie to the DOJ’s inspector general, that problem swiftly took care of itself.

He also admitted that he launched the investigation without any actual evidence…just partisan hackery.

In a discussion about the interview, McCabe’s interviewer Scott Pelley said McCabe affirmed that there had been discussions about invoking the 25th amendment to remove Trump – something that was the subject of a series of leaks last year…

.@ScottPelley on what McCabe told @60Minutes: "There were meetings at the Justice Department at which it was discussed whether the vice president and a majority of the cabinet could be brought together to remove the president of the United States under the 25th Amendment." pic.twitter.com/iVAyrEV4MF

…about a plot allegedly concocted by Rod Rosenstein (Rosenstein, for what its worth, has issued a statement denying McCabe’s assertion that the Deputy Attorney General raised the issue of Trump Administration officials wearing a wire during their talks with the president).

Finally, the Deputy Attorney General never spoke to Mr. Comey about appointing a Special Counsel. The Deputy Attorney General in fact appointed Special Counsel Mueller, and directed that Mr. McCabe be removed from any participation in that investigation. Subsequent to this removal, DOJ’s Inspector General found that Mr. McCabe did not tell the truth to federal authorities on multiple occasions, leading to his termination from the FBI.”

The full interview will air Sunday night at 7 pm. But CBS has published an excerpt below: