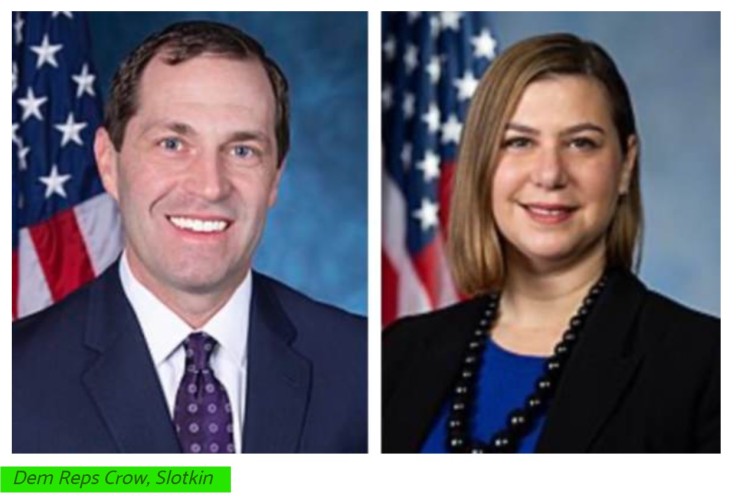 The full House of Representatives is expected to vote on two articles of impeachment on Wednesday.

There are nearly 3 dozen vulnerable freshman Democrat representatives in Trump districts who may lose their seats if they vote for impeachment.

So far they have been coy when asked what they will do when the time comes to vote on the two articles of impeachment.

Crow, a freshman who is not on the original list of 31 vulnerable Democrats flipped a red seat blue in Colorado’s 6th district, announced he will vote to impeach Trump Sunday night at a town hall.

The abuse from the Judiciary Committee continued as the panel released a 169-page report in the dead of the night Monday alleging President Trump committed criminal bribery and wire fraud.

The report will accompany the two very broad articles of impeachment that will be voted on this week, likely on Wednesday.

The report taunted President Trump with a prison threat and stated that the federal wire fraud statute imposes a 20 year prison sentence.

The Democrats allege that President Trump engaged in a months-long scheme to interfere in the 2020 election by soliciting foreign interference by withholding military aid from Ukraine unless Ukrainian President Volodymyr Zelensky agreed to investigate the Biden crime family.

Trump Impeachment is all about covering for Obama-era crimes including billions of dollars laundered, extortion and bribery.

“Much more to come” Giuliani said Sunday concluding that Democrats’ impeachment for innocent conduct is intended to obstruct investigations of Obama-era corruption.

Send these Reps to the unemployment line for voting with their Stalinist Democrat leadership to impeach President Trump for NON CRIMES!

The legislation seeks to provide cheap labor for the agricultural industry.

In the midst of tedious impeachment proceedings, the House of Representatives united beyond party lines to mass an amnesty bill for more than a million illegal immigrants Wednesday.

The bill creates a process for illegals to apply for legal residency in the United States on the basis of their employment in the agricultural sector. Individuals who have worked in the industry for six months in the past two years will be able to apply for residency, should the legislation be signed into law.

The bill’s supporters claim it is necessary in order to solve a supposed labor shortage affecting the American agricultural industry and lowering the profit margins of business owners. However, they ignore that many farmers would be able to hire American workers if they were willing to pay better wages.

More than a million illegals would be eligible for residency and eventually a path to citizenship under the law’s rules.

The illegals that are often employed in California’s agricultural industry are willing to work in uncomfortable conditions for wages that are far lower than what Americans would typically be willing to work for. Bureau of Labor statistics reveal that the median hourly wage in the agricultural industry in 2014 was a paltry $10.55, hardly a wage that Americans can afford to live on.

It’s no surprise that entrenched corporate interests are hoping to bend the rules of the American immigration system in order to get more cheap labor. Lobby groups for Big Agriculture closely pushed the bill.

One Republican supporter of the Amnesty legislation even took the opportunity to take a shot at American workers upon its House passage, falsely claiming that Americans simply want to stay at home and play Xbox all day instead of working arduous jobs.

The legislation now goes to the Senate. It’s unclear if it’ll be taken up by Senate Majority Leader, who has a mixed record on opposing amnesty legislation and cheap labor giveaways for big corporations.