David Knight hosts this live, Monday broadcast to fill you in on the weekend’s top news and to provide a preview of what’s to come this week.

President Trump sent a message to Democrats Sunday, calling out “Progressive” Congresswomen who came from failing countries only to tell America how to run its government.

House Democrats have erased a tweet promoting a hearing on the effects of President Trump’s border policies on children after finding out they used a photo depicting a migrant detention center under President Obama’s watch.

The tweet was posted in anticipation of a hearing scheduled for Wednesday afternoon, dubbed ‘Kids in Cages: Inhumane Treatment at the Border’, and included a dramatic photo backdrop displaying the dismal conditions at US migrant detention facilities – but it was soon deleted after conservative critics pointed out the origins of the image.

The congressional Democrats then had another go at it, but their alternative photo choice, much to the lawmakers’ immediate embarrassment, was also taken while President Obama was still in office. The second tweet was deleted in record time and replaced with nothing, as apparently the many thousands of up-to-date photos of the detention centers fail to convey the same sense of horror as the Obama-era images. Or perhaps a third photo was simply too much effort.

Opponents of the Trump administration have previously used the same photo to attack the president’s border policies, to such an extent that the Associated Press was forced to publish a story clarifying that the image in question was captured in 2014, smack in the middle of Obama’s second term. The AP, not exactly a pro-Trump media arm, kindly requested critics to stop attributing the images to Donald Trump.

While the Oversight Committee’s Wednesday hearing featured plenty of cogent criticisms of President Trump’s approach to the border, it seems that for many Democrats, “inhumane” policies aren’t so objectionable as long as the right person is sitting in the chair.

Bad unless Obama does it? Biden slams Trump for immigration policies he once supported Women of color are so oppressed in this country, says a woman who’s religion oppresses millions of women all over the world. 🤨🤨

There you go , they are eating each other in their own party ….. isn’t that beautiful???? Good , the other party is busy running a country .

They wanna overthrow a duly elected president because of their political and criminal crimes. Mr. President drain that swamp!

“The goal of Socialism is Communism.” Vladimir Lenin

I wish they would put this much energy into stopping human trafficking. It’s happening everyday.

Talib and her fellow justice Democrats idiots should be ran out of Congress. We need people in our government that love America and the freedoms and opportunity patriots love🇺🇸🇺🇸🇺🇸👏

Blah Blah Blah, People of coulour. So it is now all about skin colour and not merit or knowledge. What a joke America has become.

These leftist lunatics have played the ‘racist’ card for too long, that now it has no meaning whatsoever. In fact they bring out the race card only because they have no real grievance to air. You are right to call it a cult. Because like all cults they rely on violence and threats to impose their will on others.
July 9, 2019 0 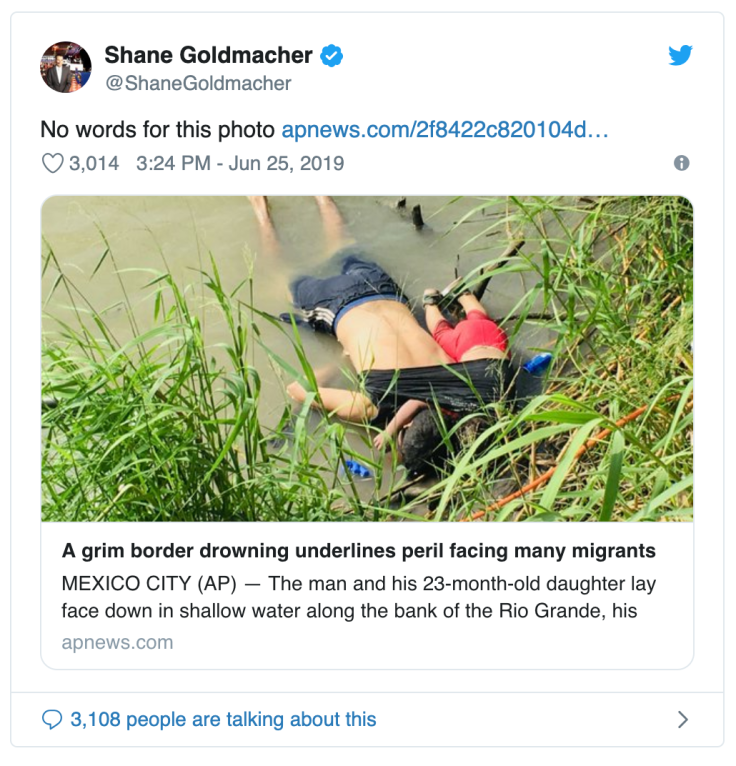 The tragic image of a drowned father and child washed ashore on the Rio Grande is being used as easy ammunition against Donald Trump — but where was the outpouring of grief when migrants were dying under the Obama administration?

There is no good argument to be made that journalists should not be critical in their coverage of the Trump administration. After all, to hold the president to account, to inform the public on the consequences of his policy choices, “to comfort the afflicted and afflict the comfortable” as that famous saying goes, is all in the job description. It’s just a pity they only decided to take the responsibility seriously when Trump took office.

Why should anyone believe that their showy displays of grief and horror are sincere now, given their silence during the Obama years, when many of the same policies causing outrage now were also in place then?

The same thing goes for the Democrats, who are eagerly attempting to cast themselves as the party of compassion. Joe Biden railed against Trump’s “deportation state” in the Miami Herald this week, despite having served as vice president under Obama, dubbed the ‘Deporter in Chief’ by immigrants rights activists.

The Obama administration deported more migrants than any previous administration, with children “moved to the head of the line” to be turfed out.

2014 is not ancient history. Can someone please explain why this was not portrayed at the time as a morally abominable statement? pic.twitter.com/tUvMnFmxVs

Two years before Trump appeared on the scene, in 2014, 445 people died attempting to cross an increasingly militarized border. Obama boasted in 2011 that the number of border patrol agents had more than doubled since 2004 — proud that he had continued the increases that had begun under the Bush administration.

The University of Arizona’s Binational Migration Institute explained in a 2013 report that “segmented border militarization”had resulted in “the redistribution of migratory flows into remote and dangerous areas such as southern Arizona.” Rights organizations spoke up about the “alarming rise of migrant deaths on US soil.”

It would be inaccurate to say that there was no coverage of the crisis while Obama was president. There was some bland, less-emotional coverage. There was also some in-depth reporting which captured the extent of the crisis — but there was no mass media mobilization against Obama himself. The facts and death tolls were not plastered across the cable news networks night and day. No one argued that Obama was shaming America.

A clip of a Trump administration lawyer arguing that migrant children did not need soap and toothpaste to be “safe and sanitary” went viral last week. It was jarring to listen to, but again, there was nothing new here — only the willingness of some to suddenly be moved to outrage.

A 2015 lawsuit described “inhumane” conditions in border detention facilities under Obama. Men, women and children, it said, were “packed into overcrowded and filthy holding cells with the lights glaring day and night.” They suffered “in brutally cold temperatures; deprived of beds, bedding, and sleep,” were denied adequate food, water and medical care, as well as “basic sanitation items” like soap, toilet paper and diapers. This all while the media treated Obama with kid gloves and liberals sang his praises.

There were no deaths of children in Customs and Border Protection custody under Obama — and there have been six under the Trump administration, so it is fair to argue, that with the implementation of some more extreme anti-asylum policies and perhaps an even greater lack of caring, Trump has taken an already dysfunctional, inhumane and under-funded system — and simply made it worse.

There is a case to be made that he has done this on purpose; to make the situation as unappealing as possible to those who might be tempted to make the treacherous and potentially fatal journey to and across the US’s southern border — but the reality is, however unappealing he tries to make it, for many, it will still be more appealing than the alternative.

The biggest elephant in the room, however, is not that the Obama administration was guilty of many of the same things as the current one. It’s that every single US administration for decades has been guilty of contributing to the creation of this crisis through an abominable imperialist foreign policy that has ravaged the very countries these migrants are coming from.

Democrats and Republicans have spent decades enthusiastically destabilizing Latin America under the guise of democracy promotion. In reality, they have stolen its wealth and resources, engineered military coups and installed dictators, funded and equipped death squads — and imposed deadly economic sanctions. Where are all the liberals crying about that? How could such inhumane policy have led to anything else?

It’s hardly the first time an image of a dead child has been used to serve a political agenda. Remember Omran Daqneesh, the five-year-old boy who became the face of Syria’s war after a photo of him, covered in ash and sitting shell-shocked in an ambulance, shot around the world?

Regime-change activists within the mainstream media commentariat had the audacity to use that image to call for more Western bombing — so, seeing some of the same crowd using the image of Valeria Martinez to frame Trump as uniquely evil in the history of the US presidency is no big surprise. The Liberal political wing violently rushed to decry an awful statement from President Trump… without checking to see if he ever actually said it.