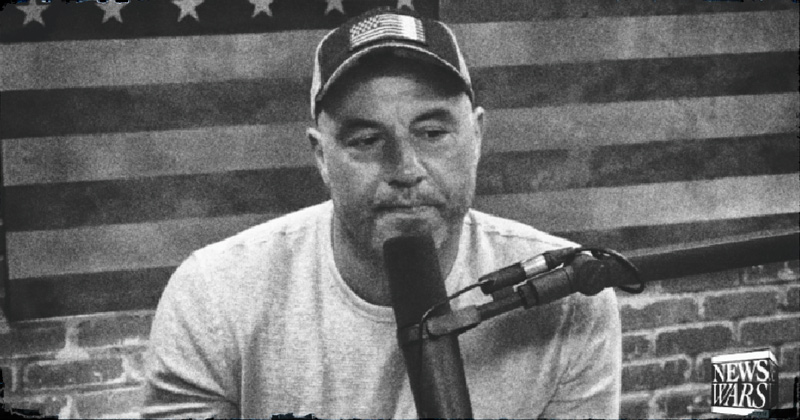 Last week, one of Rogan’s interviews was flagged after a “human review” reported the video for allegedly containing “harmful or dangerous acts.”

Alex Jones has seen this before, and he’s warning Rogan they won’t stop with just one video.

Gadde followed up, explaining that the only direct messages read by employees are those which have been reported to Twitter support.

Rogan pressed further, asking if it was possible for Twitter employees to intentionally peruse a user’s direct messages.

“I don’t think so,” Gadde replied.

However, according to multiple Twitter engineers who discussed the subject of direct messages with undercover Project Veritas journalists, Dorsey and Gadde may have been misleading with their answers, at best.

“It is creepy Big Brother.”

Pranay Singh, a direct messaging engineer, revealed that all content shared on the platform — including private messages — are stored on Twitter servers for analytical and advertising purposes.

“So all your sex messages and your dick pics are on my server now,” Singh said. “Everything. Anything you post online.”

“A machine is going to look at it. An algorithm will look at it, and they’ll make a virtual profile about you.”

Twitter co-founder and CEO Jack Dorsey addressed claims his social media platform had targeted conservatives, admitted they had likely acted too swiftly in banning some right-wing users, and failed to explain their reasons.

In conversation with podcast host Joe Rogan, Dorsey and his chief legal officer Vijaya Gadde fielded questions and criticisms regarding widespread accusations of the company catering to liberal viewpoints.

“Probably our team having a lack of context into actually what’s happening” Dorsey explained. “We would fully admit we probably were way too aggressive when we first saw this as well, and made mistakes.”

The controversy surrounding the social media giant came after conservatives and those expressing conservative viewpoints complained their accounts had been suspended for ideological reasons. Columbia University researcher Richard Hanania recently published an analysis showing that, of the 22 public figures banned by Twitter in the last few years, 21 were Trump supporters.

Conspiracy theory talk show host and Trump supporter Alex Jones (who, ironically, was on Rogan’s show just a few days ago) had his account suspended last year, alongside other figures like right wing activist Laura Loomer and GOP congressional candidate Jesse Kelly. In Kelly’s case, the company failed to explain the ban, even after Kelly’s account was later reinstated.

“A lot of where we have failed is explaining the ‘why’ behind our policy and reasons,” Dorsey admitted, promising to look into alleged excesses.

As a case example of the kind of bias in question, Rogan and his fellow guest journalist Tim Pool brought up the company’s policy against “misgenderding,” a term for referring to or addressing Transgender people as something other than the gender they identify with. Canadian Feminist Megan Murphy was recent booted from Twitter over accusations she had “misgendered” her opponent in a debate.

Gadde explained that the rule in question was only enforced if a specific person is repeatedly targeted in a way that could be considered harassment. Tim Pool was unconvinced.

“You’re biased, and you’re targeting specific individuals because your rules support this perspective,” he argued, suggesting that the rule itself reflected a liberal viewpoint.

“You have essentially created a protected class,” Rogan chimed in, highlighting how the company’s claims to political neutrality are undermined by the one-sided way it has enforced its policy against “targeted harassment.”

Phil McGraw, best known as Dr. Phil, credited Medicare and Medicaid with compromising the quality of health care in a Tuesday interview with Joe Rogan. Insufficient compensation for physicians via Medicare and Medicaid, said Dr. Phil, transformed medicine into a “high-volume business” in which quality is sacrificed in pursuit of quantity.

JOE ROGAN: When you see all these folks that are on medication today, how many of these people do you think legitimately should be on medication? Is it something you can asses?

DR. PHIL: I can’t answer that … but in my personal experience, most of the people that I see on medications, in my opinion, don’t need most of the medications they’re on. Now, that’s just anecdotal. It’s my opinion. If you ask me to hand you a research survey or study to support that — I can’t hand it to you, or I can’t point you to one.

I can just tell you, after 45 years in this experience, I see people that are on medication. They’ve usually seen someone for six or eight minutes, and said, “I’m really feeling kind of down.” Here’s some Prozac. Here’s this. Here’s that. They give it to them. They don’t even really ask why. They just give it to them because medicine has become a high-volume business, and that’s not necessarily the doctors’ fault. I mean, the way that it’s now funded — Medicare and Medicaid — you’ve got to turn them and burn them or you can’t stay in business. So it’s a high volume business, so they throw pills at them because they don’t have an hour to sit down or don’t take an hour to sit down and say, “Let’s find out what’s going on.”

JOE ROGAN: Yeah, what you’re saying is a very common sense approach, but it’s not the norm, today. It seems like more people are treating this — air quotes — depression issue as if it’s a medical disorder like diabetes, or something where you need medication.

“Wastebasket diagnoses like ADD and ADHD,” began Dr. Phil. “What used to be a spoiled brat is now ADD or ADHD, so they start prescribing these neo-cortical stimulants like Ritalin, and you give a kid that does not need a neo-cortical stimulant a stimulant, you’re really going to throw him off the charts, now, because you’ve got a normally active  brain that you’re now making hyperactive,s o you’re creating a problem that didn’t exist before the medication because you didn’t do the proper diagnosis.”

Opioids are too quickly prescribed to patients, said Dr. Phil, describing opioid addiction and abuse as amounting to a national “epidemic”:

Medications are too readily administered. That’s certainly what we’ve seen in the opioid epidemic, right now. Opioids are so readily prescribed right now that there are enough opioid prescriptions for every man, woman, and child in America to have their own bottle, and if you renew that prescription one time — one time — if you are taking those opioids at the seven-day mark, your chance of being addicted one year is one-in-12, and if renew it [and] you’re still taking them at 30 days, your likelihood of being addicted is one-in-three. These things are getting written with way too high a pill-count, and so we’re seeing a whole different kind of addiction, now, coming out of the suburbs, and they take them for awhile and they’re very expensive, and after they take them for awhile, heroin is cheaper, so they dump the opioids and start taking the heroin. So you’re seeing soccer mom heroin addicts that you weren’t seeing 10 years ago because they get started on prescription opioids and then they can’t afford them — or finally the doctor cuts them off and they’re addicted — so they start taking heroin because it’s cheaper.

“Fifty-eight percent of our rural markets today have no psychiatrists available, and something like roughly 50 [percent] have no mental health professionals available, at all; none,” remarked Dr. Phil. “So there’s just nobody available in the outlying areas. I think the more people you can get into the profession, so long as there’s a degree of competency, the better.”