Political commentator Max Boot is celebrating the prospect of a majority-minority America in the next few decades.

Boot, a fierce critic of the President, was aghast at Trump telling a “group of congresswomen of color to “go back” to where they came from” and calling his majority-minority district “a disgusting, rat and rodent infested mess,” where “no human being would want to live.”

Boot also criticized Trump for calling Al Sharpton a “con man” who “Hates Whites & Cops,” which, in his view, is a “white-nationalist device of labeling those who oppose racism as antiwhite racists.”

The fierce Never Trumper argues that “racism sells in America.”

However, Boot believes that “the political advantage from these attacks might be negated — and Trump might be deterred from launching more of them in the future” if the Republic Party “would call him out.”

Boot ultimately believes that “the Trump era will be seen as a sad last gasp of white resistance.”

A few decades from now, when the entire country is majority-miinority, the Trump era will be seen as a sad last gasp of white resistance — a reprehensible episode that will be recounted alongside the McCarthy era, the internment of citizens and noncitizens of Japanese descent during World War II, and the Palmer Raids. No one will remember or care who backed a corporate tax cut. When their grandchildren ask today’s Republicans what they did to oppose Trump’s racism, what will they say? “No comment”?

Boot has been a DC mainstay for the past few decades and established himself as one of the fiercest proponents of the failed Afghanistan and Iraq conflicts.

Since Trump got elected in 2016, Boot has become an irate critic of the Trump administration.

The election of Trump was a rejection of Boot’s regime change fanaticism and has invalidated many of the policies he championed during the Bush years.

For that reason, Boot continues to harp on Trump.

Boot does raise a good point about demographic shift, however.

The majority of this has been caused by mass migration, which benefits Democrats at the polls.

For that reason, immigration reform is crucial, which will have to entail repealing birthright citizenship, anchor baby policies, chain migration, and tightening up pathways to citizenship.

The Left and its fellow travelers openly cheer about the demographic shift that Boot mentions because they know it will electorally benefit them. 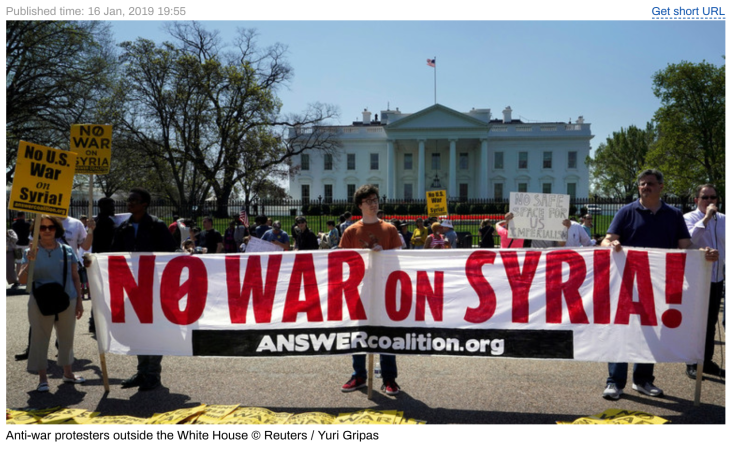 After the mainstream media and establishment Democrats piled on President Trump for even considering pulling the US out of NATO, Fox News host Tucker Carlson asked when the doves became cheerleaders for war.

That Republicans love war is an easy assumption to make. President Trump’s national security adviser John Bolton has been howling for regime change in Iran since day one. US Secretary of State Mike Pompeo is equally hawkish and confrontational towards the Islamic Republic. Further back, George W. Bush’s cabinet was stuffed with war enthusiasts like Donald Rumsfeld and Dick Cheney, and the late Republican Senator John McCain never met a war he didn’t like.

But opposition to President Trump has seen Democrats – once considered the more peace-loving and diplomatic of the two parties – embrace war like never before.

The New York Times, citing its usual anonymous sources, revealed on Monday that current and former Trump administration officials concluded the president must be a Russian agent, because he discussed pulling the US out of NATO.

“This is a huge story,” said Carlson. “Or it would have been huge in 1983 when the Soviet Union still existed, and it was still clear what the point of NATO was. NATO, you’ll remember, was created to keep the Soviets from invading Western Europe…and did a very good job at that.”

Trump’s opposition to NATO is well documented, and the president has excoriated allies like Germany for failing to meet their spending obligations under the organization’s charter. In 2018, the US spent almost $700 billion on defense, over double the expenditure of all 28 other NATO states combined. Moreover, the idea of bankrolling western Europe’s defense needs also clashes with the president’s more transactional view of foreign relations than his predecessor.

“Vladimir Putin runs Russia now,” Carlson continued. “He does not plan to invade Western Europe. He can’t. So why do we still have NATO? Nobody really knows. In Washington you’re definitely not allowed to ask.”

After the New York Times’ article was published, Democrats took their turns thrashing Trump. Former federal prosecutor Preet Bharara stated that Trump should be “promptly impeached, convicted, and removed from office” for daring to question the alliance’s value to America.

Former US Ambassador to NATO Nicholas Burns called the mere idea of pulling out of the alliance “madness” that would lead to “one of the greatest strategic catastrophes in American history.” 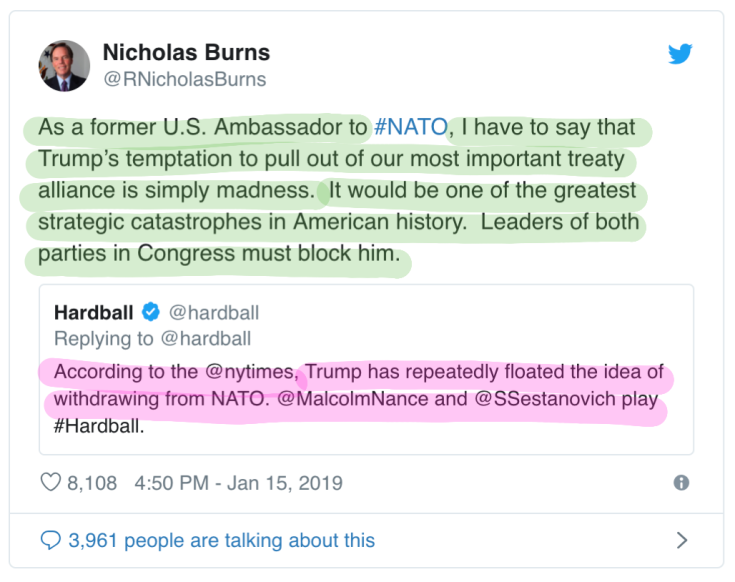 “He can’t do that to this country,” Democratic Rep. Jackie Speier added in a news interview. “It would be a ground for some profound effort by our part, whether it’s impeachment or the 25th Amendment.”

“Did you catch that?” Carlson said. “The 25th Amendment. In other words, according to a sitting member of Congress…rethinking membership in NATO isn’t just treasonous and criminal. It’s prima facie evidence of insanity.” The 25th Amendment allows for a president to be removed from office for being “unable to discharge the powers and duties of his office;” in other words, unfitness.

But is the left’s NATO cheerleading a partisan reaction to Trump’s ‘America First’ brand of 21st Century isolationism? After all, the left fact-checks his McDonalds orders and would declare breathing an impeachable offense if Trump came out in favor of air.

Not so. Among the handful of Democratic challengers who have announced presidential bids in recent weeks, Hawaiian Representative Tulsi Gabbard distinguished herself by focusing her campaign on America’s foreign policy. An Iraq war combat veteran, Gabbard has consistently questioned Washington’s bipartisan consensus on foreign wars and intervention, opposing Barack Obama’s air campaign in Syria, calling for an end to the war in Afghanistan “as soon as possible,” and sponsoring legislation to end arms sales to Saudi Arabia and defund the National Security Agency.

Gabbard was quickly labeled an “Assad sympathizer” for meeting with the Syrian leader in 2017. While Gabbard called Assad a “brutal dictator,” her opposition to military action rubbed the hawks in both parties the wrong way. The left and right piled on, christening Gabbard a “right-wing puppet of the Kremlin,” digging up past homophobic remarks she had made, and calling her a darling of the alt-right, the KKK, and even RT.

“She went, in 2017, Gloria — this is going to be another issue — to visit with Bashar al Assad in Syria,” said CNN’s Brianna Keilar. “This trip has already come back to bite her.”

“I think it makes her a less effective candidate,” contributor Gloria Borger responded. “She can’t position herself against Trump about meeting with dictators when, in fact, she’s done it herself.”

With the Democratic party circling the wagons against Gabbard, Trump, and anyone breaking from the endless war consensus, Carlson asked “whatever happened to the Democratic Party?”

“When did the anti-war people become florid neocons? When did it become the party of Bill Kristol and Max Boot and every other discredited hack still trying to replicate the Iraq disaster in nations around the world? Who knows when that happened? But that’s exactly what the Democratic Party is today.”