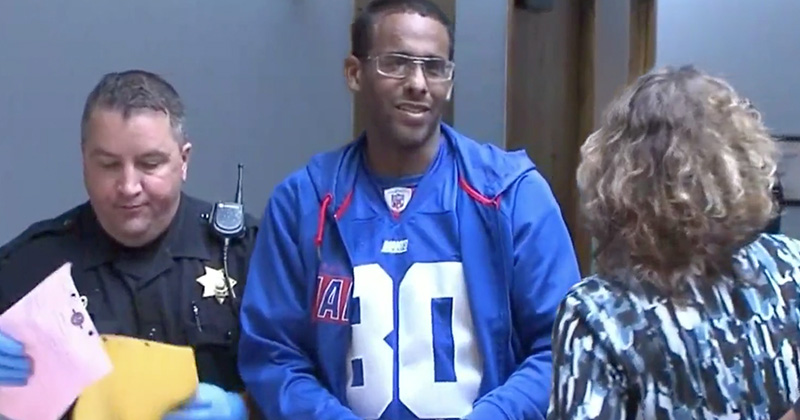 A 44-year-old New York Giants fan from Rhode Island has been arrested after threatening to “shoot up random people” at the New England Patriots’ Foxboro Stadium.

The fan, Tobias Gray, made the threat in a Facebook post where he made it clear that New England’s recent signing of WR Antonio Brown was the catalyst for his rage.

“I don’t ever really post too many things so you know this is real since the Patriots signed Antonio Brown I’m going to pull a white boys school shooting at Foxboro you might as well just hand them the ring right now I’m if I ever get my hands on a gun which I don’t have one yet but I’m looking I will go shoot up random people at Foxboro,” the post read.

He was charged in Massachusetts with making terroristic threats and a fugitive of justice complaint.

Gray even wore a New York Giants jersey during his court appearance on Monday where he was also charged with simple and domestic assault after threatening police officers who came to arrest him following the online threat.

Tobias Gray's lawyer told us he was surprised he was arrested after made a Facebook post about the @Patriots signing Antonio Brown. But Foxboro Police tell us those threats were "terroristic" in nature.

More details coming up live at 5 on @wpri12. pic.twitter.com/9nmItE9c2w

Gray, who has an extensive criminal background, allegedly told an arresting officer, “I will give your kid short-term memory loss. You better watch your back.”

The Wrentham District Court is expected to arraign Gray sometime this week.

CBS Boston covered the story in the following report: Bosa feels he must hide his support for President Trump in order to join the NFL.

The Ohio State defensive end, who is looking forward to becoming a possible NFL draft pick, admits to self censoring on Twitter in an effort to increase his chances of becoming a professional athlete.

Nick Bosa, an ardent supporter of President Donald J. Trump who previously called failed athlete Colin Kaepernick a “clown,” now says he “had to” censor himself on Twitter before the NFL draft.

In addition to denouncing Kaepernick, Sports Illustrated reports that Bosa had posted a photo of Presidents Donald J. Trump and Ronald Reagan with the caption “Goats,” short for Greatest Of All Time.

According to ESPN, he curtailed his political posting and deleted multiple posts when it became apparent he could be chosen to join the San Francisco 49ers.

“Last year he seemed to delight in posting political takes, including his support for President Trump, on Twitter and needling dissenters. (He also caused a minor social media stir by criticizing Beyonce, Black Panther and Colin Kaepernick, all eventually deleted.),” wrote ESPN.

When asked why he seemingly lost his political voice, Bosa replied “I had to,” noting that “there is a chance I might end up in San Francisco.”

This would seem to be a double standard where conservatives feel they must self censor and remain politically unbiased, while radical Democrats like Kaepernick feel comfortable kneeling during the national anthem, silently endorsing Islam, and otherwise alienating conservative Americans.

When Kaepernick left professional football, he launched a lawsuit against the NFL and settled for between $60 and 80 million. His lawyer now seems to believe he can arrange for Kaepernick to return to the NFL, possibly to the New England Patriots. In addition to the money gained from the lawsuit, Kaepernick was rewarded with a lucrative Nike sponsorship deal, and near universal adoration in the mainstream media.

If conservatives like Bosa had the tenacity of Kaepernick, perhaps the NFL would be forced to take an official stand on political expressions among its players. As it stands, it appears leftists are allowed to speak freely, and are then rewarded for doing so, while conservatives feel cowed into silence.