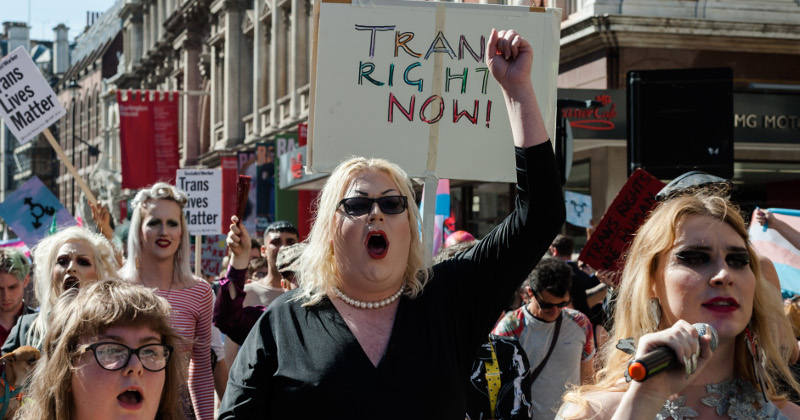 A transgender advocacy NGO has told teachers that puberty blockers are harmless and should be given to children as young as 12 in a “model” training session for UK schools.

Scholars and medics warn such advice is “disturbing.”

Administering puberty blockers to children questioning their gender identity as early as the age of 12 is beneficial for them as such treatment is “completely reversible” and gives them “immense relief,” a trainer with the transgender lobby group Mermaids told a gathering of some 20 teachers and pastoral support workers at the Newman University in Birmingham last December.

The content of the meeting, which has arguably become a blueprint for further training sessions held by the group in schools across the UK, was revealed by the Times on Sunday.

“Puberty blocker medication doesn’t make any changes,” the trainer argued, explaining that it simply puts “a pause button on the pituitary gland and freezes puberty where it is” and the biological processes “will recommence” as soon as the treatment is stopped.

The Mermaids’ line of argument did not sit well with one of the meeting’s attendees, Michael Conroy, a pastoral support worker, who taped the footage. He told the Times that he was concerned about the group literally encouraging young children to believe that they were “born in the wrong body.”

His concerns were shared by Michael Biggs, an associate professor in sociology at St Cross College, Oxford, who told the Times that such a strategy pushes children toward further medical intervention up to sex affirmation surgery.

“Mermaids [are] not giving pupils a choice that they may just be gay or lesbian. Instead, it is diverted down a drastic path that ultimately ends in surgery. To be propagating such information to schools is disturbing,” he said.

The group stated on its website that its advice was based on an “international scientific study and 25 years of experience in this field.” It also boasted about receiving funding from the UK Department for Education ever since the December 2018 session, under a program “overseen by the Government Equalities Office.” 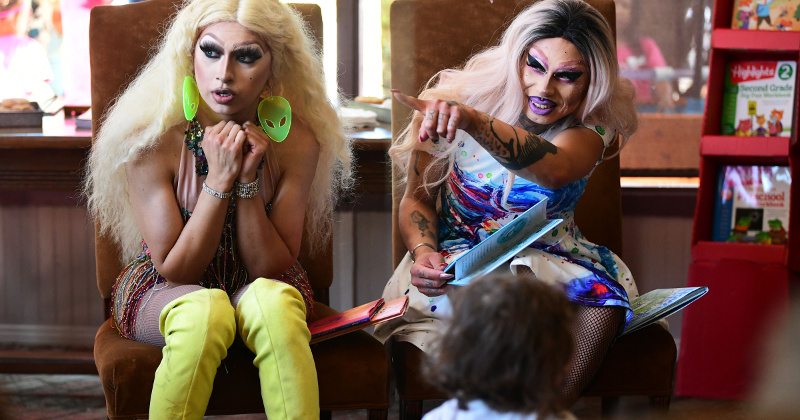 While Professor Biggs has been accused of “transphobia” in the past, according to some reports, he is far from being the only one who sounds an alarm over practices that many find quite controversial. Earlier this year, groups of medical specialists both in the UK and across the pond – in the US – warned about the long-term effects of puberty-blockers and hormonal drugs, calling it a “grave public health concern.”

The doctors warned that treatment starting with puberty blockers and often ending up with gender-reassignment surgeries has horrifying side effects, including “surgical complications, thromboembolic and cardiovascular disease, osteoporosis, malignancy, and persistently elevated rates of suicide.”

Meanwhile, links between gender identity issues and autism have been repeatedly invoked in the past. In 2017, a London clinic for transgender children reported that a third of their patients had “moderate or severe autistic traits.” Yet, instead of paying more attention to the psychological side of the issue, many schools still apparently opt for going ahead with gender affirming actions.

An NGO co-funded by George Soros was spared prosecution in 2016 after the US urged Ukraine to drop a corruption probe targeting the group, the Hill reported, pointing to potential shenanigans during the US presidential election.

Bankrolled by the Obama administration and Hungarian-American billionaire George Soros, the Anti-Corruption Action Centre (AntAC) was under investigation as part of a larger probe by Ukraine’s Prosecutor General’s Office into the misallocation of $4.4 million in US funds to fight corruption in the eastern European country.

As the 2016 presidential race heated up back in the United States, the US Embassy in Kiev gave Ukraine’s Prosecutor General Yuri Lutsenko “a list of people whom we should not prosecute” as part of the probe, the Hill reported. Ultimately, no action was taken against AntAC.

Lutsenko told the paper that he believes the embassy wanted the probe nixed because it could have exposed the Democrats to a potential scandal during the 2016 election.

A State Department official who spoke with the Hill said that while the request to nix the probe was unusual, Washington feared that AntAC was being targeted as retribution for the group’s advocacy for anti-corruption reforms in Ukraine.

AntAC wasn’t just the benefactor of well-connected patrons – at the time it was also collaborating with FBI agents to uncover then-Trump campaign manager Paul Manafort’s business dealings in Ukraine. Manafort later became a high-profile target of Special Counsel Robert Mueller’s probe into alleged Russian collusion, and was sentenced to seven-and-a-half years in prison for tax fraud and other financial crimes.

Lutsenko divulged in an interview with the Hill last week that he has opened an investigation into whether Ukrainian officials leaked financial records during the 2016 US presidential campaign in an effort to sway the election in favor of Hillary Clinton.

While AntAC may have failed to help the FBI find the Russia collusion smoking gun, the group’s activities constitute yet another link between the anti-climactic Russiagate probe and Soros, a Democrat mega-donor who bet big on Hillary Clinton taking the White House in 2016.

In 2017, the billionaire philanthropist siphoned money into a new group, the Democracy Integrity Project, which later partnered with Fusion GPS to create the now-infamous Steele dossier.

Spokespersons for AntAC and the Soros umbrella group Open Society Foundations declined to comment on the Hill’s scoop.

Ironically, the prosecutor general who had preceded Lutsenko, Viktor Shokin, resigned under pressure from Washington – which accused Shokin of corruption.

The migrants were picked up from Libya intending to go to Malta but were turned away from Malta so the NGO Proactiva Open Arms requested to be allowed entry to Italy.

Salvini replied: “My answer is clear: Italian ports are closed!” Mr Salvini tweeted. “For the traffickers of human beings and for those who help them, the fun is over.”

This sparked anger in the human trafficking NGO who replied on twitter: “We continue with 311 people on board, without port and in need of supplies,” saying that they had rescued more than 300 migrants from three vessels in difficulty, including men, women, children and babies.

Committing the logical fallacy of appealing to emotions, they went on to say:

“If you could feel the cold in the images, it would be easier to understand the emergency. No port to disembark and Malta’s refusal to give us food. This isn’t Christmas.” An odd thing to say given the majority of the migrants are of the Islamic faith, thereby not celebrating Christmas anyway.

Tweeting further to Matteo, Open Arms’ founder Oscar Camps went onto say that “your rhetoric and your message will, like everything in this life, end. But you should know that in a few decades your descendants will be ashamed of what you do and say.”

Many countries are showing opposition to the economic migrants paying a high financial cost to be brought by human traffickers when real refugees can’t afford to and are left behind in their countries.

The 94 passengers were rescued by a passing container ship last week as they were en route to Italy.

After being returned to Libya they have refused to get off the ship.

The Libyan coast guard reported Wednesday that migrant passengers aboard a container ship docked at the port of Misrata are refusing to disembark.

The migrants, who are from Eritrea, Somalia, Bangladesh and Sudan, were rescued last week when their vessel began sinking en route to Italy. The vessel was too far from Libya for the coast guard to rescue, so authorities asked a container ship sailing in the opposite direction to pick them up.

That ship has now docked at its intended destination but officials say: “When we asked the migrants to get off the ship, they refused and demanded it take them to Italy.”

A 19-year-old Sudanese migrant from Darfur said: “I was stopped by this ship and thought I would be sent to Malta or Italy. I prefer to die but not to be returned to Libya … it’s a prison.”

Some of those on board were willing to get off the ship, but had been prevented from doing so by others. Coast guard officials say that they are currently in the process of getting those who want to leave off the ship. So far, 14 people have disembarked. There are a number of women and children among the passengers.

Passengers are currently being attended to by human rights and medical experts. Julien Raikman of Doctors Without Borders (MSF), an NGO, says that Libyan authorities have allowed the group to treat those in need of urgent medical care as well as deliver food.

He urged a peaceful solution to the situation and suggested offering alternatives to the migrants: “We talked to people who have suffered torture on the migration route and it seems abnormal that the United Nations cannot propose an alternative for them.”

Take them back to Libya

A number of Europe-bound vessels carrying hundreds of passengers have been intercepted by Libya’s EU-backed coast guard of late. Migrants are taken back to Libya where they are screened by UN agencies and then taken to government-affiliated detention centers. The notoriously poor conditions at those camps have been harshly criticized by human rights groups.

European countries have been seeking a solution to keep migrants from coming to the continent via Libya — which has become a launching point for such journeys — but have failed to come to an agreement as to how to achieve that goal. Italy, which is often the destination of vessels sailing from Libya, has been especially vocal about the need to stop migration.

Thousands of people have drowned in the Mediterranean since the European migrant crisis began in 2015; more than 1,000 have drowned in its waters in the first six months of 2018 alone.

You can read this article as it originally appeared at Deutsche Welle here.