Are concerns expressed by Rush Limbaugh and others that workers in the federal bureaucracy may try to politicize the response to the coronavirus as a weapon against President Trump’s reelection that far fetched? Workers in many federal government departments and agencies have tried since his election to sabotage Trump from within, proudly calling themselves part of the Resistance.

On Tuesday while Trump was wrapping up a state visit to India, a Centers for Disease Control and Prevention (CDC) official, Dr. Nancy Messonnier, gave an alarmist briefing to reporters that ran counter to Trump’s efforts to calm the public and markets. While some, including TGP’s Joe Hoft, have noted Messonnier is the sister of controversial former Trump Deputy Attorney General Rod Rosenstein, suggesting that relationship may have been behind the alarmist briefing, Trump himself has said he does not believe the CDC is trying to hurt him.

However, a November 9, 2016 report by NPR station WABE-FM in Atlanta where the CDC is headquartered headlined an article on CDC employees’ reaction to Trump’s victory: “Atlanta CDC Employees Express Anxiety Over Trump’s Win”.

Employees at the Atlanta-based Centers for Disease Control and Prevention say the mood in their office is somber.

The employees of one of the largest federal agencies in Atlanta said they’re concerned about job safety, funding and new public health policies under Donald Trump’s presidency.

At the General Muir deli across the street from the CDC, a few employees talked to WABE, asking that their names not be used. One microbiologist said her colleagues were crying in the hallways.

“It’s really sad,” she said. “It’s depressing. I’m eating a bagel to try and be happy.” 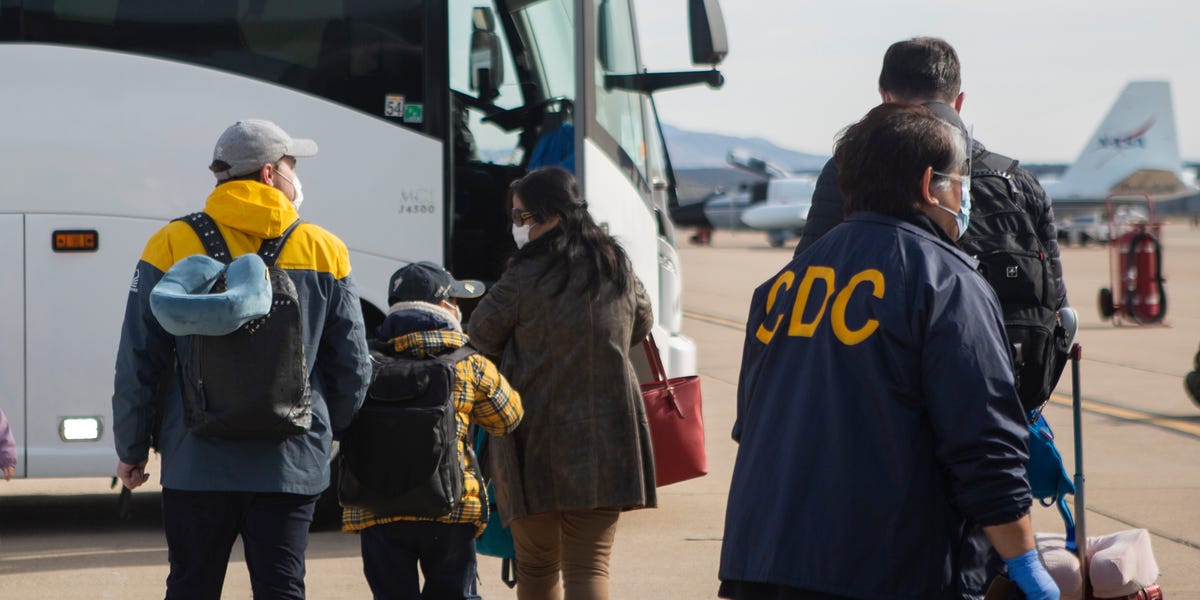 But, she said, they are looking for a silver lining, specifically reaching out to low-income, rural communities.

“My team is trying to identify how to reach out to this electorate that has clearly expressed that they’re hurting,” she said. “We’re thinking, you know, how can we reach out to these people so they don’t feel the need to feel disenfranchised, I guess.”

Trump Q&A about the CDC at Wednesday’s press briefing on the coronavirus:

Q Thank you, sir. A number of your supporters online have embraced these theories reported — these theories that the CDC may be exaggerating the threat of coronavirus to hurt you politically. Rush Limbaugh the other day said this has been advanced to weaponize the virus against you.

THE PRESIDENT: You don’t mean my supporters. You mean my — my people that are not supporters?

THE PRESIDENT: Yeah, I agree with that. I do.

Q Have you seen evidence of that?

THE PRESIDENT: I think they are. I think — and I’d like it to stop. I think people know that when Chuck Schumer gets upset — I mean, he did the same thing with a couple of trade deals that are phenomenal deals now — everybody has acknowledged they’re phenomenal deals — before he ever saw the deal. He didn’t even know we were going to make a deal. They said, “What do you think of the deal with China?” “I don’t like it. I don’t like it.”

Q Have you seen evidence that the CDC is trying to hurt you? That there are career officials —

THE PRESIDENT: No, I don’t think the CDC is at all. No, they’ve been — they’ve been working really well together. No, they really are. They’re professional. I think they’re beyond that. They want this to go away. They want to do it with as little disruption, and they don’t want to lose life. I see the way they’re working. This gen- — these people behind me and others that are in the other room, they’re incredible people. No, I don’t see that at all. 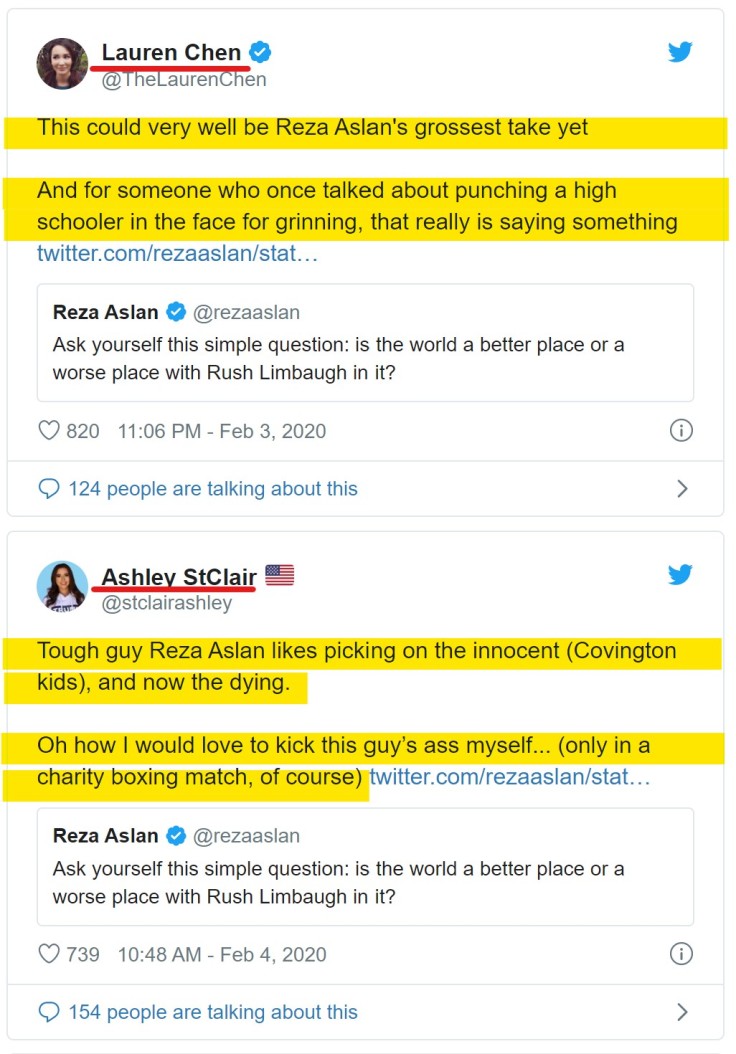 This was after another day of Never-Trumper hacks and hosts attacked President Trump and refused to defend the US president from the flimsy accusations of Adam Schiff, Nancy Pelosi and a partisan CIA “whisleblower.”

Rush must be tired with the BS on FOX News — so much so that he told the channel to change its name to “FOX Never Trumper Network.”

Since that time FOX News has loaded its impeachment panel with Never-Trumpers who hardly defend this president from the scurrilous accusations by Nancy Pelosi and Adam Schiff.

On Tuesday Rush Limbaugh went off on FOX News once again.

RUSH LIMBAUGH: I can’t tell you the number of people who are complaining to me about Fox and their analysis here. And, folks, all I can tell you is there’s nothing new about that. I’d lower my expectations if I were you. If you’re expecting what Fox used to be, you need to shift your perspective.

The only goal of the Left is to harm America.

Trump on the cusp of destroying the deep state.

Rush Limbaugh says that America is in a “cold civil war” because President Trump is on the verge of fully exposing the deep state.

The radio host told his vast listening audience that latest impeachment efforts against Trump were just another attempt to overturn the 2016 election results and “nothing more than the Steele dossier 2.0.”

Limbaugh said that the Washington establishment was getting increasingly edgy because Trump threatens to destroy their power base for good.

“Their careers, their fortunes, their corruption. There are terribly big stakes involved here for these people. And Trump is on the cusp of overturning it and exposing it,” Limbaugh said.

He also noted that the basis for the impeachment inquiry against Trump is just more manufactured opposition research.

“The media is not media. It’s just Democrats who work in the media, and the whole group of ’em is aligned. And what we are in the middle of now, folks, is a Cold Civil War,” he said.

Last night, President Trump quote tweeted Pastor Robert Jeffress, who told Fox News, “If the Democrats are successful in removing the President from office (which they will never be), it will cause a Civil War like fracture in this Nation from which our Country will never heal.” Several Republicans such as Lindsey Grahamand Dan Crenshaw have thrown their support behind such legislation.

Even President Trump declared that he is willing to sign this proposal into law.

However, Rush isn’t having it.

He described red flag laws as “a law which would allow law enforcement to identify a deranged individual before he goes out and shoots. In other words, you could apprehend somebody before they do it if they exhibit red flag-type behavior, like if they’re mentally ill or if they’ve attended a Trump rally, or who knows what it would be.”

Limbaugh then proclaimed that red flag laws are a “pipeline to gun control.”

He views this scheme as a way for the Left to “incrementally” get what they want, which is law-abiding gun owners’ firearms.

Who could oppose that, see? “Who could oppose the mentally ill not getting guns? “If it takes a red flag law to do it, Limbaugh, then we gotta support it — and, if you don’t agree with this, it just means you’re too big of a… You’re just.. You’re just… You’re just not flexible enough, Limbaugh!” That’s what people will say. Now, it’s a Democrat idea, which is its first disqualifier to me. It means it sucks from the get-go. But I’m going to be flexible here. I think it’s their way of incrementally getting what they want, which is your gun or guns.

For Limbaugh, kowtowing to anti-gun pressure will not satisfy the relentless Left:

By conceding this ground to the Left, they will become even more emboldened and demand more concessions further down the line that bring them closer to their ultimate goal—civilian disarmament.

Red flag laws are already present in 15 states, and now appear to be at the top of the legislative agenda in the U.S. Congress.

Limbaugh nails it in his analysis.

This is a Rubicon moment for gun rights in America.

If Republicans yield to the Left on red flag laws, they will open up the floodgates for enormous gun grabs in the future.

‘Unelected people came close to pulling off what is a coup,’ he says

“Hillary Clinton is who tried to rig a presidential election…Hillary Clinton and her pals in the Obama Department of Justice and the FBI, they are the ones who colluded with the Russians. They colluded to produce this entirely bogus Steele Dossier,” Limbaugh said Monday on Fox News.

Limbaugh went on to say that Clinton’s attempts to overthrow Trump using the debunked Steele Dossier compiled with Russian intelligence amounted to the real collusion.

“Unelected people came close to pulling off what is a coup,” said the Republican host.

“Who’s working with Russians? Steele, Hillary’s guy! They are working with the Russians…the dossier traces right back to Hillary and her campaign in the DNC.”

Limbaugh’s comments come after Clinton said that Trump would have been indicted for collusion if he wasn’t the president.

“I think there is enough there that any other person who had engaged in those acts would certainly have been indicted,” Clinton said Monday during the Time 100 conference. 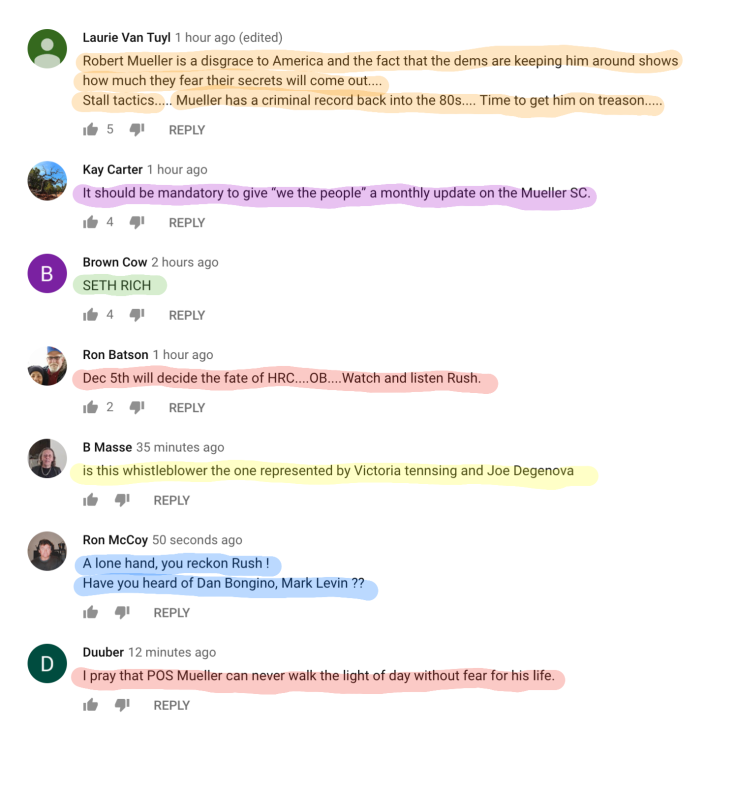