Biden told CNN he is coming for the guns if he is the next President.

Former Vice President Joe Biden admitted to Anderson Cooper on CNN that he will be coming for the guns if he wins the Democratic nomination for president and defeats Donald Trump in 2020.

After Cooper quizzed Biden on the “come for your guns” talking points he would inevitably receive from Republicans, Biden responded by saying: “Bingo. You’re right, if you have an assault weapon.”

When the assault rifle ban was passed in 1994 and signed into law by former President Bill Clinton, Biden was among the top cheerleaders for that unconstitutional gun control legislation while serving as a U.S. Senator.

“In case after case of murderous rampages by disturbed and violent thugs, the ability of military-style assault weapons to kill and maim not just a few but eight or 10, 14, 35 people in just minutes has been proven beyond any reasonable doubt,” he said at the time.

Biden is hoping to enforce a more stringent version of the 1990s assault weapons ban if he is able to win the presidency.

“Do you want more of them on the street? Do we want to do that?” Biden added.

He made the case on CNN that resistance is futile for anyone who believes they can defend their liberty from a tyrannical government with firearms.

“The guys who make these arguments say ‘The tree of liberty is watered with the blood of patriots, we need the protection against the government.’ Well, you’ll need an F-15 for that. You need something well beyond whether or not you have an assault weapon,” Biden said.

Later in the interview, Biden pivoted and claimed that he would not be coming for the guns directly. He would instead use indirect measures to get guns out of the hands of Americans.

“That’s not walking into their home, knocking on their doors, and going through the gun cabinets,” Biden said. “Right now, there is no legal way to deny them the right, if they legally purchased them. But we can, in fact, make a major effort to get them off the street and out of the possession of people.”

However, Biden did claim that his hypothetical administration would not use an executive order to come for the guns – in what could be considered a rebuke to his primary rival, Sen. Kamala Harris (D-CA).

Biden said: “I’m the guy that pushed the Brady Bill through the United States Congress when I was chairman of the Judiciary Committee on background checks. You can in fact do those kinds of things, but cannot as a matter of executive order constitutionally say ‘This is what we’re going to do relative to this particular weapon.’”

Although Biden may not be the most hostile Democratic contender against firearms freedom, he would still infringe upon the 2nd Amendment and wield his power to make life more difficult for gun owners if he obtained the highest office of the land. 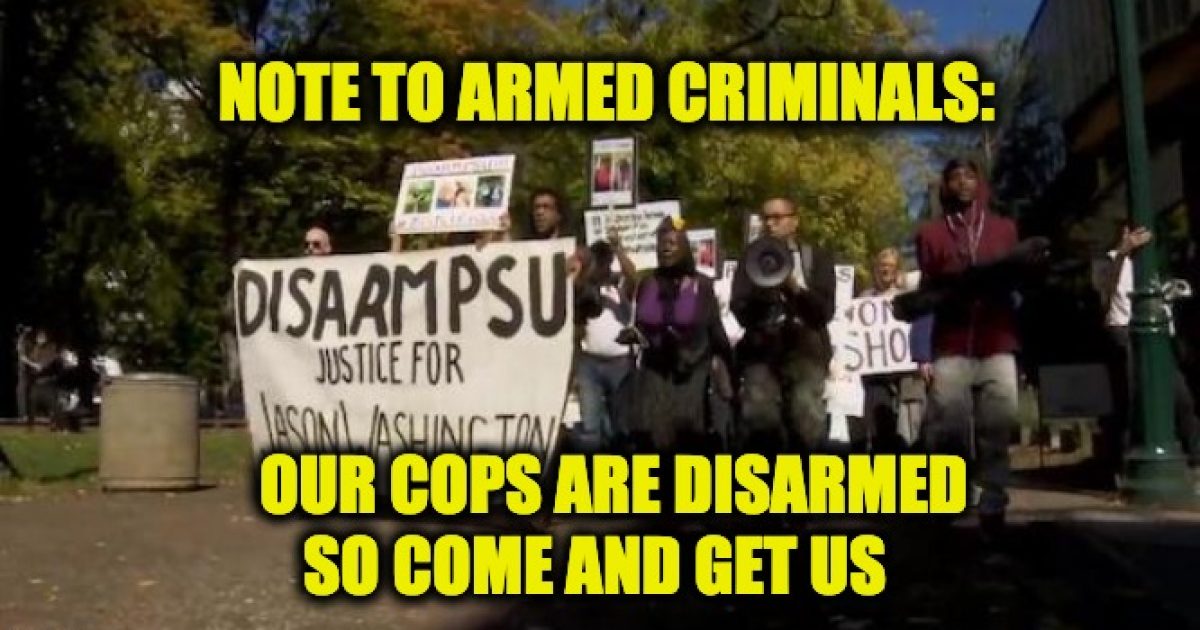 By Faye Higbee and Jeff Dunetz

Never mind how stupid this sounds. Never mind how much students today are afraid of mass shooters. Portland State U students have decided they want their campus police disarmed.

Portland State University students rallied at a Thursday board meeting, calling for campus police officers to be disarmed.

Trending: The AOC Mess: Why The Holocaust Should NEVER Be Used As Weapon Of Political Warfare

“Police with guns are ticking time bomb,” said Olivia Pace, one of the students who spoke in front of the Portland State University Board of Trustees.

Students in favor of disarming campus police held signs and spoke at the board meeting. They said they believe it has taken far too long for university leadership to take action…

At Thursday’s board meeting, multiple students spoke directly to trustees, voicing their frustration with the lack of decision making on the issue.

“We feel like the longer the university pushes this off to more and more committees and more and more third parties, the issue will kind of just dissolve,” said Pace.

Earlier this year a report, commissioned by the university, found that more than half of students and faculty supported disarming campus officers. That same report also recommended keeping campus police armed.

Really? And what happens if a criminal with a gun comes onto the campus. Will the Campus police tell them to drop the weapon or they will tell the dean? Or their mommies?

Last year PSU officers shot and killed Jason Washington – who was a legal gun carrier that happened to drop his weapon as he was trying to break up a fight. The Campus Cops testified:

When Washington got up, the officers say he was holding the gun in his hand.

“I’m screaming, like, begging really – for this guy to drop his gun,” Dewey told the grand jury.

Both officers said they told Washington to drop the gun. Then they said he pointed it in their direction.

“In my mind, I’m like thinkin’ I’m gonna be shot right there, and I fire a couple rounds,” said McKenzie. “I see him fall to the ground. Uh, when I see that, I saw firing. I, my next thought process is if he’s wounded, he can shoot at us again at the last know location we were at.”

That testimony was confirmed by a Portland Police forensic technician who was called in to examine the body camera video of the shooting, slowing it down and enhancing the video to see whether Washington pointed his gun at police.

The technician, Portland Police Bureau officer Anthony Eugenio, showed the grand jury that Washington’s right arm was extended in front of his body with a black object in his hand, consistent with a firearm.

When asked if he believed that Washington pointed the gun towards the officers, he said that is “correct.”

Even so, the story of Jason Washington was a tragedy.  But the students think the campus police officers are “dangerous” because they carry guns—and they are dangerous to students who point a gun at them.

How many of these students worry about a mass shooter, armed robber, a rapist with a gun, or any other kind of gun-wielding criminal gets onto the Campus? How many of them would be quickly shot dead if their campus police were unarmed? Who would stop a shooter? They are valid questions, ones that the “social justice warrior” crowd ignores.

Much of this post was first seen at Conservative Firing Line

Senator Corey Booker wants to be President of the United States and he has released a plan to lower gun violence. Of course, nothing in the plan would actually lower gun violence and he would support throwing you in jail if you didn’t hand over your AR-15. This case highlighted by Jude shows the kinds of different tactics anti-gun proponents are using these days to subvert gun rights.
BLP has reported on numerous occasions how certain corporate interests like Dick’s Sporting Goods and CEOs have pitched in to undermine gun rights.
Gun controllers recognize that they don’t have full legislative control, so they’ll find other means to subvert gun rights.
May 4, 2019 0

“There are going to be beatings and probably shootings, and shooting at police”

Former CIA officer Kevin Shipp warns that leftist violence is going to get “very very bad” over the next two years in response to President Trump indicting the plotters who tried to remove him from office.

During an interview with USA Watchdog’s Greg Hunter, Shipp, a former manager of high risk Counter Terrorism Center protective operations with the CIA, predicted that there would be arrests of deep state figures who were involved in the scandal.

“This was a coup. It was a conspiracy. It was criminal activity. These people need to be indicted, charged and need to be put in prison, and if they’re not, then our Constitution is nothing more than a sham,” said Shipp.

He added that there was an ongoing “civil war” within the government and that, “There is a Marxist movement within the DNC that is in control right now.”

Forecasting that Trump will win re-election in 2020, the former CIA officer said that the left’s reaction would become increasingly unhinged.

Shipp urged Americans to exercise their Second Amendment rights in preparation for a violent attempt by the left to take over “our Constitution and culture.” 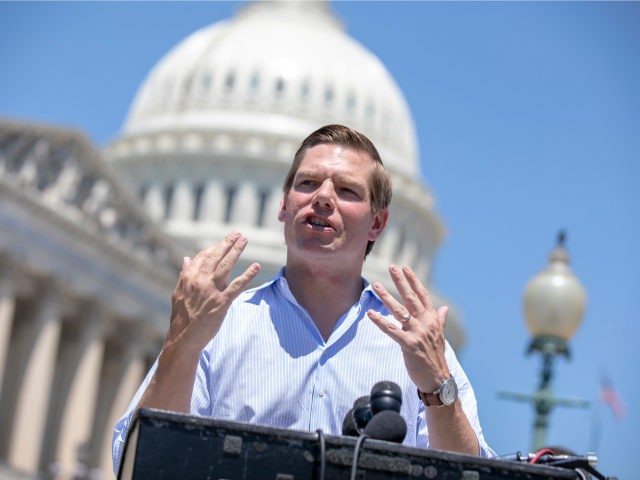 The synagogue was attacked Saturday morning. Breitbart News reported that the attacker arrived at approximately 11:20 am, opening fire shortly thereafter. Three persons were wounded and one was killed.

he attacker then fled the scene while a good guy with a gun ran behind him, shooting at, but missing, the suspect.

CNN reports that the Chabad in Poway attacker used an “AR-type assault weapon.”

Here is another way to look at this:

And in a gun-free zone, it does not matter what type of weapon the attacker uses because he is the only one with a gun. Therefore, he has time on his side. The Parkland attacker had time to pause and reload five times while the Sandy Hook attacker had over nine minutes without armed resistance.

Also missing from Swalwell’s list of shootings and types of weapons used is any acknowledgement that California already has an “assault weapons” ban.

Regardless of these things, Swalwell is full steam ahead on his push to do a mandated buyback of “assault weapons,” with jail-time as a consequence for those who do not comply.