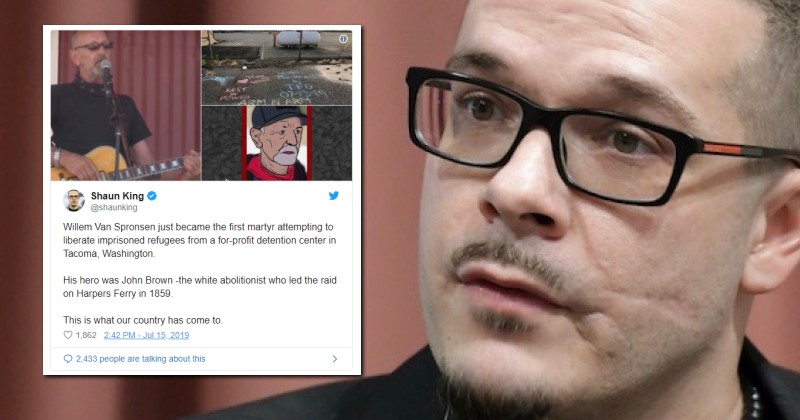 UPDATE: King deleted the tweets, but he has not been suspended by Twitter.

Black Lives Matter leader Shaun King described the terrorist who tried to massacre Border Patrol officials as a martyr and said his deranged manifesto was “beautiful”.

69-year-old Willem Van Spronsen was shot dead by police on Saturday morning at an ICE facility in Washington State after he threw molotov cocktails in an attempt to ignite a propane tank. He was also armed with an AR-15 semi-automatic weapon.

Van Spronsen’s manifesto subsequently emerged in which he stated, “I am Antifa” and said the attack was a protest against the establishment of “concentration camps” in the United States.

Despite the fact that Van Spronsen is a domestic terrorist who literally tried to kill Border Patrol officers, Black Lives Matter mouthpiece Shaun King praised him on Twitter.

He then described Van Spronsen’s manifesto as “beautiful” and added, “He wasn’t crazy -inaction is.”

King then tweeted an image of tributes to Van Spronsen and commented, “His mind was very clear.”

King’s tweets are a direct violation of Twitter’s rules, which state, “We…prohibit the glorification of violence,” but his account has not been restricted.

As we highlighted yesterday, both Alexandria Ocasio-Cortez and Ilhan Omar refused to condemn the attack despite the terrorist using the same “concentration camp” rhetoric as they did.

Van Spronsen also previously appeared on a CNN show because he was a member of a far-left gun club described as the “good guys” by a CNN host.

The Young Turks were forced to delete numerous videos from their YouTube channel after helping to whip up the fake narrative that the murder of a 7-year-old black girl in Houston was a racist hate crime when in fact the gunman was black.

As we reported yesterday, for almost a week left-wing activists and the media fueled the story that the tragic killing of Jazmine Barnes was a white supremacist attack and indicative of a larger trend in America of black people being indiscriminately targeted by whites.

This narrative collapsed after it was revealed that the two suspects in the murder were both African-American and the white bearded man who authorities claimed (after pressure from civil rights activists) was behind the murder was completely innocent of the crime.

The murder was likely a result of the killer targeting the wrong vehicle after a drug deal gone wrong. Citing claims that the mother was friends with the killer on Facebook, others have speculated that she was attempting to steal the drugs and merely blamed a white suspect because she feared for her own life.

Black Lives Matter activist Shaun King, who offered a $100,000 reward for the killer to caught, still appeared to be pushing the white supremacist narrative even after he personally knew the killer was black, according to a Daily Caller report.

It has now emerged that the Young Turks deleted at least four videos from their YouTube channel which had promulgated the fake narrative.

One video that was re-uploaded by another user and originally titled ‘The CRIME Every Outlet in America Should Be Talking About’ features Young Turks contributor Francis Maxwell complaining about why President Trump didn’t draw attention to the murder.

At one point in the clip, Maxwell asserts that Trump wouldn’t pay any attention to the issue unless “there were murmurs of the suspect being a Muslim or an immigrant.”

Maxwell also chided Fox News for not affording the story enough coverage while demanding that the (later proven false) drawing of the suspect be tweeted out by Trump while also drawing comparisons to Charlottesville.

Another video featured a panel discussion of the story while a fourth video featured Hasan Piker again pushing the narrative that the shooting was a racist hate crime.

Instead of issuing a retraction video or a clarification, the Young Turks appear to have just deleted all of the videos in the hope that no one would notice in an attempt to avoid accusations that they exploited the entire tragedy for race baiting and anti-Trump political points scoring.