The tech corporations are colluding to destroy freedom of speech.

Independent journalist Ford Fischer has been temporarily banned from posting links on Facebook after he tried to post an article on the platform exposing censorship on YouTube.

Fischer explained in a Facebook post that this is the first time the platform has censored him in such a manner.

“I just tried to post a news story about YouTube censorship to Facebook. Facebook banned me from sharing links for 2.5 days without explanation. This is the first time FB has ever suspended any feature for me,” he wrote.

The ReclaimTheNet.org article that Facebook does not want to be shared on its platform explains that 2019 represented a low point for YouTube due to its intensifying crackdown on content creators:

2019 started with YouTube and other social media continuing their account banning and suspending spree, often baselessly – a trend started the previous year. These kinds of blunders were likely caused by overreliance on algorithms and overzealous attempts to keep content under control.

Comedian Steven Crowder’s troubles on YouTube began in February when his annual Anti-Oscars Party live stream was suspended on the grounds of four copyright claims from Disney and Academy of Motion Picture Arts and Sciences (AMPAS) Oscars.

These bogus claims were filed under DMCA rules that are supposed to allow fair use, and Crowder argued that his content as a transformative work fell under the fair use principle. He also said the real reason the entertainment giants came after him by abusing YouTube’s broken copyright system was anti-competitive – simply to keep him off the platform.

Even when the issues were later rectified, it was days after the livestream and the damage was already done.

This system was further exploited later in the year to block President Trump’s “Nickelback Joe Biden meme” video, exploring a corruption scandal involving the former US Vice President in a humorous way. Those who disliked the meme decided to take it down using a questionable copyright claim, ignoring that parody is another example of fair use.

While it would be expected that Facebook would want to proliferate an article bashing their competitor, that is not the case. The Big Tech entities – including but not limited to Facebook, Google, Amazon, Twitter and Pinterest – are actively colluding to destroy digital free speech.

The tech industry even held a conference earlier this year where the private sector came together to network and devise new ways to choke the freedom of expression of dissidents:

The event made it clear that there will be many opportunities for funding from the corporate elite to facilitate the Orwellian nightmare in the digital age. If the plotting of the Koch network is ultimately successful, it won’t even require government intervention for Big Brother to become reality.

“The work of combating extremism will require alliances, partnerships, and funding decisions, in many cases between surprising bedfellows. Join a diverse range of leaders for a conversation about how and why they have sought to involve their organizations in the work of overcoming extremism, including through policy alliances and philanthropic investments,” the program reads.

Heading into the next year’s presidential election, the censorship is only going to ramp up, and Big Tech will be working in unison to crush independent voices. 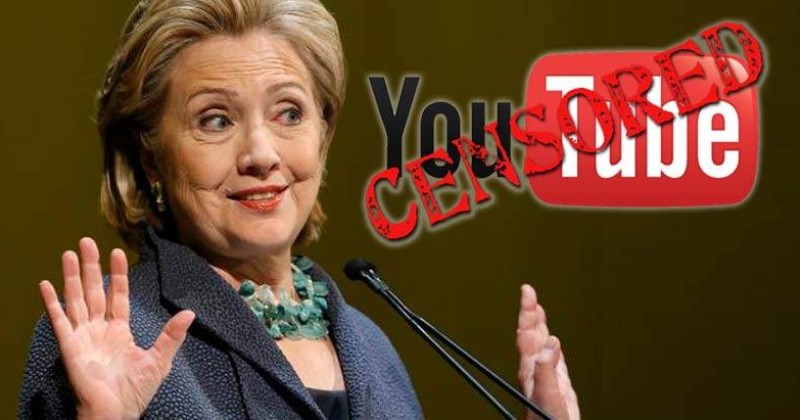 Deluged below over a dozen non-related mainstream media videos.

YouTube has buried a viral video of Hillary Clinton lying for 13 minutes straight in yet another example of election blacklisting.

Despite the video obtaining over 15 million views, it remains buried under over a dozen mainstream media search results even when you search for the direct word for word title.

YouTube election blacklisting has been a hot topic since Steven Crowder drew attention to the fact that the Google-owned company was deliberately preventing conservative channels from appearing in search results.

YouTube has literally broken its own search engine in a partisan effort to make conservative content harder to find.

A search for “Steven Crowder Change My Mind” would previously not return any such videos, despite most of them having multiple millions of views.

A search for my own name also produced zero links to my videos but numerous links to videos from other channels criticizing me.

In a new video, Crowder notes that while YouTube has fixed some of these issues since last week, other examples of conservative content being buried, specifically in the United States, have not been reversed.

As Dr. Robert Epstein has proven, algorithmic manipulation can literally shift millions of votes. This is election meddling, plain and simple.

UPDATE: We've been able to confirm that @TeamYouTube's #YouTube2020ElectionBlacklist is still blocking our content for some searches, but ONLY in the United States. The implications are alarming… pic.twitter.com/n0ESF6qvZ0

The future of social media

The communists claim another scalp.

Google reportedly runs two “blacklists,” one allowing staff to remove “fringe” websites from search results and another for filtering out opinion articles, according to conservative news outlet the Daily Caller.

The Daily Caller claims to have seen screenshots of the lists in question. Google did not address whether its staff deliberately weed out certain political content, but did say they are working to filter out “inappropriate” search results.

The first list, titled “webanswers_url_blacklist,” lets staff block specific web addresses from popping up in Google’s ‘featured snippets’ when a user asks a question. Many of the pages blocked are op-ed articles, which a user could mistake for straight news reporting. This list appears to target opinion pieces in general, regardless of their political bent.

Another list, which the Daily Caller suggests was compiled by algorithm, blanket blacklists a host of conservative and “fringe” sites from appearing in the ‘featured snippets.’ The American Spectator, Breitbart, The Gateway Pundit and the website of Bring Your Bible to School Day are among those included. Several progressive sites, including Consortium News and a blog called Breitbart Unmasked also reportedly made the list.

That Google would censor conservative or “fringe” content will come as no surprise to some. The company, along with a bevy of other Silicon Valley tech giants, has been accused of harboring a liberal bias for several years now, with new stories of favoritism surfacing regularly.

YouTube, a subsidiary of Google, implemented a blanket ban on “hateful” and “supremacist” videos last week. The ban, which came about after Vox journalist Carlos Maza led a campaign against conservative shock-jock Steven Crowder, swept away or demonetized thousands of videos critical of the social justice movement and several video reports on extremist movements by legitimate journalists.

Though the right has made the most noise about big tech’s alleged censorship efforts, a growing number of left-wing voices have been sounding the alarm too. Facebook has been perhaps most overt in clamping down on anti-establishment content across the political spectrum, but Google has also come under fire for changing its algorithms to de-rank left-wing, socialist, and anti-war websites.

Vox – the company that led the effort to ban Steven Crowder over his use of homophobic language – previously gave a platform to Filthy Frank, who produced a satirical YouTube video in which he sang the words, “you’re a giant f*ggot and you should kill yourself.”

Oh, the foul stench of hypocrisy.

Last week, Crowder has his channel de-monetized by YouTube after Vox’s Carlos Maza accused the comedian of using gay slurs against him, despite Maza using some of the same slurs against himself in previous comments.

This led to the #VoxAdPocalypse, with leftist outrage mobs pressuring YouTube to delete or de-monetize thousands of videos and channels which featured controversial material. The collateral damage even took out some historical archive channels, prompting educators to complain that they had been censored for “hatemongering”.

However, Vox’s disdain for homophobic language was noticeably absent when they gave Filthy Frank a pass during a 2017 profile video which amassed almost 3 million views, allowing his fans to make the argument that offensive and politically incorrect language was OK because Filthy Frank is just a comedy character.

“Filthy Frank pulls no punches and even openly says the word “faggot” without bleeping it,” writes Brandon Morse. “In one video, he comedically apologized — much like Crowder did — for saying certain things, especially against the LGBT community. This video ended with a song with the lyrics “… you’re gay now / you’re a giant faggot and you should kill yourself.”

“It should be striking everyone as weird that Vox was only too happy to celebrate comedic videos featuring a person encouraging gay people to kill themselves just two years ago. Suddenly it can’t help but grasp at its pearls at the mere suggestion that someone is “queer,” he adds.

As ever with the left, the motto always seems to be, “It’s OK when we do it.”

Carlos Maza not only got Steven Crowder Demonetized but so many other channels out there got caught in the crossfire. Many that were not even political. But Demonetization isn’t enough, Maza wants conservative and right channels Banned from the YouTube platform.