After leaving office in 2017, Vice President Joe Biden Bragged about strong-arming the government of Ukraine to fire its top prosecutor.

Joe Biden made the remarks during a meeting of foreign policy specialists. Biden said he, “Threatened Ukrainian President Petro Poroshenko in March 2016 that the Obama administration would pull $1 billion in U.S. loan guarantees, sending the former Soviet republic toward insolvency, if it didn’t immediately fire Prosecutor General Viktor Shokin.” Biden suggested during his talk that Barack Obama was in on the threat.

In April John Solomon revealed what Biden did not tell his audience. Joe Biden had Shokin fired because he was investigating Joe Biden’s son Hunter.

Joe Biden and Democrats have then gone out on an international smear campaign to destroy Viktor Shokin’s education.

Today we present you this exclusive document: the complaint of former Ukrainian prosecutor Viktor Shokin against Joe Biden for interference in the legal proceedings of Ukraine – which incidentally cites our UkraineGate investigation …

To the interim director of the National Bureau of Investigation

On the commission of a criminal offense

(under article 214 of the Criminal Procedure Code of Ukraine)

I have read and understood Article 63 of the Constitution of Ukraine and the liability provided for in Article 383 of the Criminal Code of Ukraine “Slanderous denunciation of an offense”.

During the period 2014-2016, the Prosecutor General’s Office of Ukraine was conducting a preliminary investigation into a series of serious crimes committed by the former Minister of Ecology of Ukraine Mykola Zlotchevsky and by the managers of the company “Burisma Holding Limited “(Cyprus), the board of directors of which included, among others, Hunter Biden, son of Joseph Biden, then vice-president of the United States of America.

The investigation into the above-mentioned crimes was carried out in strict accordance with Criminal Law and was under my personal control as the Prosecutor General of Ukraine.

Owing to my firm position on the above-mentioned cases regarding their prompt and objective investigation, which should have resulted in the arrest and the indictment of the guilty parties, Joseph Biden developed a firmly hostile attitude towards me which led him to express in private conversations with senior Ukrainian officials, as well as in his public speeches, a categorical request for my immediate dismissal from the post of Attorney General of Ukraine in exchange for the sum of US $ 1 billion in as a financial guarantee from the United States for the benefit of Ukraine.

The facts I have described above are confirmed, among other things, by the official interview of Joseph Biden published in the media (https://www.youtube.com/watch?v=iHoXh42BraI), where he declares that Ukraine will not receive money if I remain in my post as Attorney General.

Throughout the last months of 2015 and the first months of 2016 Joseph Biden, taking advantage of his position, came several times on official visits to Ukraine in order to negotiate with the leaders of the country my eviction and, consequently, the closing of the objective investigation into the offenses committed by persons associated with the company “Burisma Holding Limited” (Cyprus), including the son of the aforementioned US official.

Due to continued pressure from the Vice President of the United States Joseph Biden to oust me from the job by blackmailing the allocation of financial assistance, I, as the man who places the State interests above my personal interests, I agreed to abandon the post of Prosecutor General of Ukraine.

After my resignation caused by illegal pressure, no active investigation into the offenses concerning the company “Burisma Holding Limited” (Cyprus) was carried out and, therefore, the persons implicated in these offenses were not identified, nor arrested or charged.

According to the conclusions of the International Law Association of 18.04.2017, made by the doctor of law, Professor O.O. Merezhko, at the time vice-president of the Parliamentary Assembly of the Council of Europe, the request of the Vice-President of the United States Joseph Biden concerning my ousting from the post of the Attorney General of Ukraine as a condition for the granting of financial (economic) assistance is qualified as pressure, which represents interference in the internal affairs of Ukraine on the part of a foreign power in violation of one of the principles of international law.

Moreover, the facts of pressure on me as Prosecutor General of Ukraine from Joseph Biden in the circumstances described above are confirmed by an independent journalistic investigation under the name “UkraineGate” conducted and published by the French online media “Les-Crises.fr” available at this link https://ukrainegate.info/part-2-not-so-dormant-investigations/

Read the rest at Les Crisis.

Well, this didn’t make any headlines this week.

In an interview in August John Bolton praised President Trump and called his call with Zelensky “warm and cordial.”

2.And this is an interview with John Bolton describing the president's conversations w/ the president of Ukraine as warm & cordial in Aug 2019.If he thought at the time that the president was stiff-arming the Ukrainians, he had a funny way of showing itpic.twitter.com/fXekPCD6hH

Here is the full interiew.

Rep. Elise Stefanik SHUT DOWN a reporter today that kept interrupting the Republicans as they answered questions and was trying to make Dems’ impeachment case for them.

These guys just might lose their minds when impeachment doesn’t go through, and he wins 2020.

Attorney Alan Dershowitz argued that the Democrats’ reliance on “subjective opinions” for impeachment is a dangerous precedent, during the Senate impeachment trial on 1/27/2020. Be sure to like, subscribe, and comment below to share your thoughts on the video.

The demoRATS are experts at timed leaks when they don’t have real evidence. 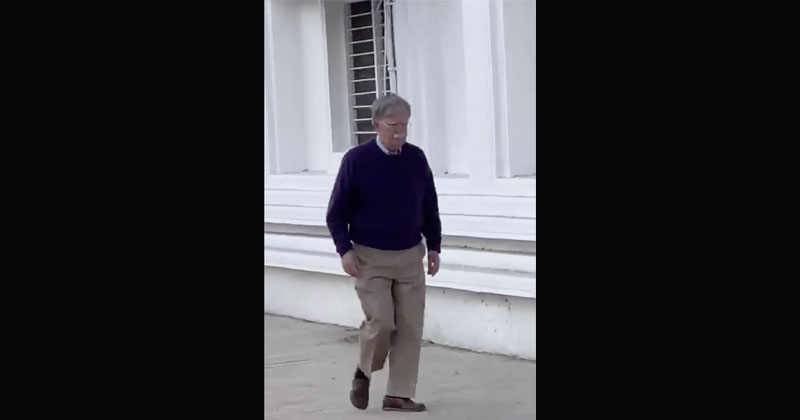 Fired White House national security adviser John Bolton was recently seen wandering the streets of Qatar, sparking questions about why the neocon was even in the Middle East.

Video of Bolton reportedly walking on a sidewalk in Doha, Qatar was posted to Twitter earlier this month.

Bolton couldn’t have walked the entire Al-Rayyan road. It’s clear that he was at the start of it where all the gov buildings are. Also, the areas beside where he was walking are gated. I’ve been to Qatar many times. This entire thing looks suspicious.

Whether Bolton was in Qatar to take advantage of lobbying opportunities or if he was up to something more questionable remains a mystery.

One Twitter user noted Bolton was likely walking down Qatar’s government district, suggesting he may have been peddling his influence there.

The video must have been taken after Bolton was fired as National Security Advisor, because he would likely not have been wearing plain clothes otherwise and would likely be accompanied by a security detail.

Politico reporter Daniel Lippman reported that Bolton was in Qatar on “personal business.”

Bolton is currently being hailed as the left’s new hero after the New York Times reported Monday that Bolton has concerns about President Trump and Ukraine detailed in his upcoming memoir, “The Room Where It Happened.” They refused to cover her destruction of the Democrats’ narrative.

During the Senate impeachment trial on Monday, Trump defense lawyer Pam Bondi destroyed the false narrative pushed by the Democrats regarding Ukraine.

“When the House managers gave you their presentation, when they submitted their brief, they repeatedly referenced Hunter Biden and Burisma. … They referenced Biden or Burisma over 400 times. And when they gave these presentations they said there was nothing to see, it was a sham,” Bondi said to the Senate. “This is fiction.”

Bondi exposed the details of Hunter Biden’s dealings in the Ukraine. She noted that he received $83,333 per month from Burisma Holdings because of his connections, and his dad made sure that Prosecutor General Viktor Shokin was let go after he attempted to investigate.

She also referenced the United Kingdom’s Serious Fraud Unit, law enforcement in Ukraine, deputy assistant secretary at the State Department George Kent, and many different news outlets including the Washington Post, ABC News and the Kyiv Post to make the case that Biden’s shady business dealings were worth investigating.

“You’ve heard from the House managers that there is not anything to see here; that all of this is baseless,” Bondi concluded. “All that we are saying is that there was a basis to talk about this, to raise this issue. And that is enough.”

While Bondi may have been the star during today’s impeachment hearings in the Senate, the fake news media made sure to do everything possible to ignore her.

CNN attempted to “fact check” Bondi’s arguments by presenting globalist spin to obscure the plain truth of the matter. They cited several stooges who toe the Democrat line.

“Rather than supporting Ukraine’s reforms and working to root out corruption, corrupt actors within the prosecutor general’s office are making things worse by openly and aggressively undermining reform,” said Geoffrey Pyatt, the US ambassador to Ukraine under Barack Hussein Obama.

The fake news has shamed themselves yet again as they work with the Democrats in an attempt to overthrow the 2016 election. However, Bondi’s arguments will be on the public record forevermore regardless of the attempts by the fake news to censor her.