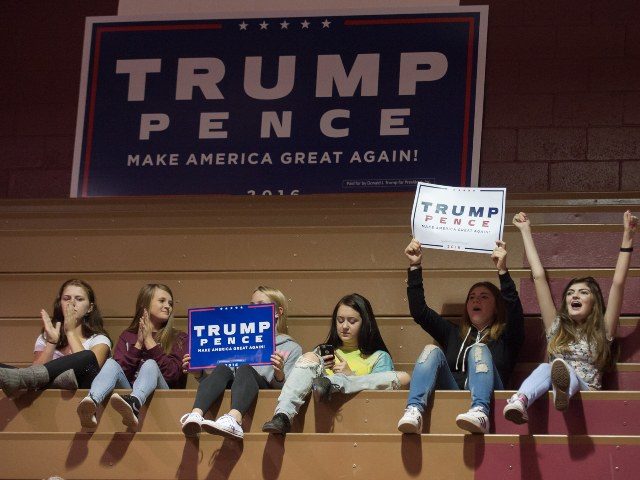 Dan Gallipoli, a student and Turning Point USA chapter president at West Haven High School in Connecticut, told Breitbart News that teachers and administrators at his school got offended over TPUSA signs that read “America is the greatest country in the world.” The conservative student spoke to host Alex Marlow in a Wednesday interview on SiriusXM’s Breitbart News Daily for the show’s weekly TPUSA campus report segment.

“We learned that administration — specifically some of the teachers in the school — had called for our club to be disbanded,” said Gallipoli on Wednesday, “and they were encouraging people to take down our posters — right now, we’re still working with the administration, the principal and the superintendent, trying to get our posters up.”

When Marlow asked which of the group’s signs were being taken down, Gallipoli answered that it had specifically been TPUSA signs that read, “Big Government Sucks” and “America is the greatest country in the world.”

“Literally ‘America is the greatest country in the world’ triggered the left on your campus?” said Marlow, “That is crazy.”

“The [administration’s] idea was that maybe it could offend people who were from another country and who had family in another country,” Gallipoli explained.

“But we argued — we have rivalries with other schools, and we say stuff like Notre Dame sucks,” added Gallipoli, “So what’s the problem with saying that America is the greatest country in the world when we think West Haven is the greatest high school in the world, and that might offend people who would transfer from Notre Dame.”

The student went on to explain that after the pro-America signs triggered leftist administrators, the TPUSA group invited Connecticut GOP chairman J.R. Romano to their next meeting, which was met with online attacks by a board education member in another school district.

“We invited the Connecticut GOP chairman to our next meeting so that we could get a second opinion and maybe some suggestions for solutions,” said Gallipoli, “and he posted about it on his social media, and he had an argument with a board of [education] member from another district.”

The conservative student said that board of education member Trisha Brookhart “called us racist and sexist and said we were brainwashed by our Republican parents.”

“Absolutely pathetic to attack teachers for standing up to these racist, sexist, bullies who are brainwashed by their Republican parents,” tweeted Brookhart, according to a recent report by the Hartford Courant.

Brookhart has since removed her tweet amid Romano’s calls for her resignation.

“I was defending teachers,” explained Brookhart, who, while addressing her social media post in a follow-up statement, somehow managed to both backpedal and double down on her initial comments about the conservative students.

“I’m really tired of our school teachers being attacked for anything that they do,” said Brookhart, “I don’t know what the chairman of the Republican Party is doing going into our schools — I’m not saying all Republicans hold their views — I honestly am afraid for my safety because they’re a little crazy.”

Despite receiving online attacks and push-back from adults who work in education, Gallipoli said that he remains motivated, and that his TPUSA group is already making plans for when school is back in session.

“Next year,” said Gallipoli, “what we’re going to be doing is we’re going to be inviting any teachers who disagree with us, or think we should get banned, to our meetings so we can talk to them and really show [them] what Turning Point is about.”