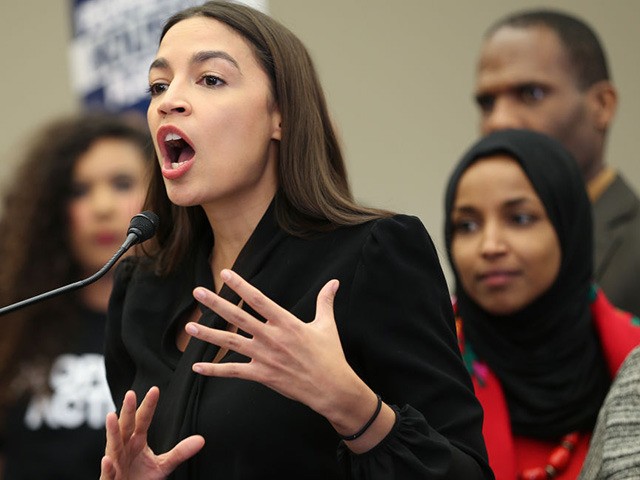 Rep. Alexandria Ocasio-Cortez (D-NY) said during a live Q&A on Wednesday that President Trump is displaying an “epic level of negligence and incompetence that is costing human lives” during the coronavirus pandemic and suggested that people are dying because the president ignored scientists.

Ocasio-Cortez took questions from social media users on Wednesday and used the opportunity to criticize the Trump administration’s response to the pandemic. The outbreak in the United States, she seems to believe, would not be as severe if Trump and Republicans took it seriously and listened to scientists.

“Someone said, ‘Do you think if we took precautions earlier than we did our numbers would be lower than it is now?’ Yes,” Ocasio-Cortez answered.

I think that if Trump took this seriously, if Republicans took it seriously, I think that if if we decided to listen to scientists early more than we listen to, you know, people who care more about profit than human lives, we would have taken precautions much earlier and we would have saved lives. We either would have gone into lockdown earlier in some circumstances or we would have started producing these damn ventilators way earlier than we are now. We would have invoked the Defense Production Act, but because Trump didn’t do that early enough, now we’re scrambling. And everything that is happening is happening late. And every decision that we make late means that people are dying unnecessarily.

The New York lawmaker’s assertion falls in line with Speaker Nancy Pelosi (D-CA), who also suggested that the crisis is worse due to inaction from the president.

Notably, Trump took decisive action that very month, announcing a ban on travel to the U.S. from China — a move many of his left-wing critics characterized as “racist.”

Just weeks ago, Ocasio-Cortez suggested that people who were no longer patroning Chinese restaurants during the crisis are “racist”:

“Honestly, it sounds almost so silly to say, but there’s a lot of restaurants that are feeling the pain of racism,” she said during an Instagram Live weeks ago.

However, Ocasio-Cortez continues to believe that Trump and the GOP bear the brunt of responsibility for coronavirus-related deaths:

The socialist lawmaker also vented about journalists who are “out there just assessing the president’s tone of his voice instead of what he’s actually saying” and declared that Trump is “conveying an epic level of negligence and incompetence that is costing human lives”:

Everything she says in this video is either misleading or an outright lie pic.twitter.com/csX7ybFaON

“And it’s not just Trump,” she continued, bringing Florida Gov. Ron DeSantis (R) into the mix. “It is not just Trump. Look at DeSantis in Florida who’s just calling for lockdowns today and Florida beaches have been packed.”

“And these aren’t people that are just in Florida. These are people who are traveling to Florida spreading disease and traveling back to wherever they came from, and these people aren’t taking it seriously,” she added.

While DeSantis formally issued a stay at home order on Wednesday, he had already taken aggressive action against travelers from coronavirus hotspots. Those actions include screenings at major Florida airports, checkpoints on roads along the Florida-Georgia border and Florida-Alabama border, and a mandated 14-day quarantine for individuals from the New York Tri-State area and Louisiana.

Ocasio-Cortez recently said that there “should be shame for what was fought for” in the recently passed and signed bipartisan emergency relief bill. Last week, she specifically expressed outrage that the cash payment portion of the measure did not extend to non-citizens.

Robert Mueller is special counsel no more, but he fired a parting shot during his televised statement that has sent Democrats into a frenzy of calls for impeaching President Donald Trump, whether by accident or by design.

At a remarkable press conference on Wednesday – at which he refused to take questions – Mueller sank the theory that Attorney General William Barr somehow misinterpreted his report, and sent a clear message to House Democrats eager to have him testify about the probe that “the report is my testimony.”

Despite years of work, millions of dollars and near-unlimited powers, Mueller’s special prosecutors found zero evidence of collusion or conspiracy – and absent that underlying crime, no grounds to charge the US president with obstruction of justice, even as they wrote up 240 pages of tortured reasoning as to why they wanted to. Case closed, conspiracies put to bed, lots of people with egg on their face, time for the republic to move on, right?

Did you honestly expect people who have gone all in on a conspiracy theory about Russia somehow “stealing” the election from Hillary Clinton – investing not just the past three years, but their entire political and media capital into it – to give up just because there isn’t a grain of truth in it? Instead, they latched onto Mueller’s carefully weasel-worded declaration:

That was no mere misstep, either. Mueller followed that line up with a passage about how his office did not make a determination whether Trump committed a crime because the standing policy of the Office of Legal Counsel (OLC) is that a sitting president cannot be indicted. Not their fault, you see, they had no choice.

Except they did, and they had the avenue to make their claim – but chose not to, knowing that Barr would shoot it down, because he disagreed with their interpretation of obstruction laws long before he became AG. But those are details known to lawyers and honest legal analysts, not the propagandists and conspiracy-peddlers who have spent years whipping the American public into a hysteria not seen since the 1950s.

Mueller’s was a weasel statement, worthy of former FBI boss and his personal friend James Comey – who actually admitted to Congress that he hoped to force the appointment of a special counsel by leaking the memos of his meetings with Trump to the press.

It also seems to have been a dog-whistle to Democrats, who have been arguing ever since the Mueller report was published that it totally proved obstruction of justice and gave them the pretext for impeachment. A variety of party luminaries, such as House Judiciary Committee Chair Jerry Nadler (D-New York), presidential candidate Senator Cory Booker (D-New Jersey) and firebrand Alexandria Ocasio-Cortez (D-New York), now doubled down on the claim.

What happens next is anybody’s guess: Democrats may hope enough Republicans will break ranks to successfully impeach and convict Trump, though that’s no more likely to succeed than any of the schemes to overturn the 2016 election result so far. Or they might hope that impeachment proceedings will mobilize their voters for 2020. Either way, the opposition party and the media aligned with it are determined to keep flogging the dead horse of Russiagate, hoping it will deliver them victory.

Those who believe Mueller’s mission was to “get Trump” will no doubt be happy with the former special counsel’s last move. But Americans who hoped he would clear the air clogged by endless conspiracy theories have every right to feel disappointed.

“I wonder what their employers would think”

Finnish Twitter user Iisak Selin responded to a tweet by journalist David MacDougall with a photo of himself using the hand gesture.

MacDougall responded by tweeting, “Hi Iisak – Do you have a job? I wonder what your employers think of you making a sign that has been co-opted by white supremacists and racists? Would be interesting to find out. Or maybe a future employer is interested…”

He then responded to another individual who posted a photo of himself doing the OK hand sign with the same threat.

“I don’t know if these people have jobs, but I wonder what their employers would think about them making signs that are closely associated with & used by white supremacists and racists?” asked MacDougall.

That’s funny, because I wonder when MacDougall and his ilk will stop abusing their platforms to threaten to doxx people simply because they don’t like their politics and do some actual journalism.

Respondents on Twitter soon put MacDougall in his place.

As we document in the video below, the media was tricked into believing the OK hand sign was secret code for white supremacy as a result of a 4chan troll and has been whipping up hysteria about it ever since.

The New York City entered the race, and came out swinging against President Donald J. Trump.

“Even before his announcement, de Blasio already qualified to participate in the Democratic primary debates, according to a poll from Reuters and Ipsos,” Axios said. “The mayor intends to leverage his record of New York achievements such as universal pre-kindergarten and raising the minimum hourly wage. Following the announcement, he will go on a 4-day campaign tour to Iowa and South Carolina, per NBC.”

“The Dems are getting another beauty to join their group. Bill de Blasio of NYC, considered the worst mayor in the U.S., will supposedly be making an announcement for president today. He is a JOKE, but if you like high taxes & crime, he’s your man. NYC HATES HIM!” he said.

De Blasio is squarely in the progressive corner. He was widely ridiculed for last month for proposing a skyscraper ban in New York City to fight climate change.

The mayor of America’s most populous city has a new plan to fight “global warming,” and it involves doing away with the landscape of the city over which he presides.

“We’re going to introduce legislation to ban the glass and steel skyscrapers that have contributed so much to global warming,” said New York City Mayor Bill de Blasio said. “They have no place in our city or our Earth anymore.”

The mayor did not offer much in the way of specifics regarding his plan. Will existing skyscrapers be demolished, or will the city ban new ones from being erected? Many such buildings are apartments and condos. Will the people who live in them be forced to move? Also, what happened to “climate change?” This reporter was under the impression that “global warming” was an outdated term.

According to Spectrum News 1 in New York City, de Blasio’s proposal would prevent developers from “using all glass facades unless they meet strict new energy guidelines,” which he called “the city’s version of the Green new Deal.” 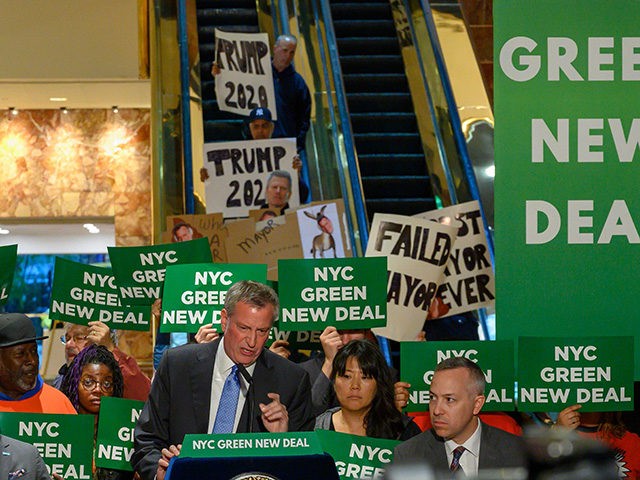 Speaking at a podium steps from the spot where President Donald Trump announced his own presidential run in 2015, the Democrat said he had come to Trump Tower to promote a new city air pollution law requiring skyscraper owners to cut greenhouse gas emissions or face fines.

De Blasio said Trump’s buildings in the city could face a combined $2.1 million in annual fines if they don’t reduce emissions by 2030.

“President Trump, you’re on notice. Your polluting buildings are part of the problem,” he claimed.

However, de Blasio’s speech was all-but drowned out by a throng of Trump supporters who demonstrated behind him on the building’s escalators, booing, whistling, chanting and holding up signs with messages including “Failed mayor” and “Worst mayor ever.” Footage of the heckling was shared to social media.

As we await Mayor de Blasio’s presser at Trump Tower, music blares to drown him out and a LGBT for Trump supporter makes the elevator descent. pic.twitter.com/OF6LdANPLC

Mayor hasn’t even begun speaking and this is already a circus pic.twitter.com/gg162vUyyp

Snake oil salesman de Blasio tried to sell the ludicrous Green New Deal, while Trump supporters rode the escalator behind him with signs.

Loud music also played over the building’s sound system for part of the event. De Blasio had to shout to be heard.

“It’s so nice of them to serenade us at Trump Tower. Clearly, they are uncomfortable with the truth,” he said.

Under a deal that President Trump struck with the city decades ago, Trump Tower’s lobby is considered a public space for much of each day.

The Associated Press contributed to this report.