In the midst of a late night purge of conservative accounts, Twitter banned the conservative user who used the platform to log all instances of violence used against supporters of President Trump. As Big League Politics has detailed over the last several months, vocal supporters of the president are routinely attacked in public, have their property vandalized or destroyed, and face intimidation for simple acts, such as wearing a ‘Make America Great Again’ hat or having it displayed in a vehicle.

Also last night, a parody account mocking Rep. Alexandria Ocasio-Cortez was banned last night, with Twitter sending the user an email suggesting he did not properly identify it as a parody, even though the word “parody” was used both in the account’s name and bio.

Anti-Trump violence appears to be on the rise around the country.

The situation is exacerbated when considering crimes against private property.

Since March, at least three individuals have had their property vandalized for supporting President Trump. A recreational vehicle used to sell pro-Trump merchandise outside rallies was battered overnight, a man had his tires slashed by a woman who later admitted to being provoked by the ‘MAGA’ hat on his dashboard, and just this week tires were slashed outside a pro-Trump event.

According to a Welsh man, his 55-year-old father may have died because the British national health system failed to treat him when he suffered a stroke on a Sunday.

Colin Rogers, 55, suffered a basilar artery occlusion on April 14, which he could have survived if he had undergone a thrombectomy, which removes a blood clot from the brain.

Instead, Rogers was taken to Prince Charles Hospital in Merthyr Tydfil. The University Hospital of Wales in Cardiff could have performed the procedure, but enough specialists staff were reportedly not available. Rogers died on April 18.

His son Callum, 26, stated, “Although we don’t know what the outcome would have been, this potentially could have saved his life. My dad was denied the chance of survival as Wales does not have access to this treatment and doesn’t have any units. We were also told [by a stroke consultant] that if he fell ill on a weekday they would have had a chance to transfer him to a specialist unit in England. Because this was a Sunday it was impossible. To find this out is just gut-wrenching.”

Colin Rogers’ family issued a statement saying, “Up to 500 people a year in Wales may die or be left profoundly disabled because of a lack of availability of endovascular thrombectomy. This has to be done within 24 hours or it is too late. Colin is not the only person to have died because of this postcode lottery and this is not a new problem. We want to change this. We want to raise awareness and campaign for equal access for patients such as Colin, who will die or live a profoundly disabled life without treatment. We want to make a difference so that people are not failed by the system as Colin was.”

Whilst we do not comment on individual cases the general position in Wales is that WHSSC took on the commissioning of mechanical thrombectomy from April 2019. Prior to this individual health boards commissioned the service directly from providers. In south Wales, WHSSC accesses treatment from provider hospitals in Cardiff and Bristol on a case-by-case basis dependent on the capacity available at the hospitals when required. The capacity depends on the availability of specialist staff able to carry out the procedure which has varied over time.

The University Hospital Wales, Cardiff, has recently recruited a second consultant who is due to start in autumn 2019, allowing the service to be developed further. Treatment for patients from mid Wales and north Wales is usually commissioned from hospitals in the Midlands or Liverpool, again dependent on the availability of specialist staff. To the extent that specialist staff are available, this is a seven day a week service.

A basilar artery occlusion (BAO) starts with variable and stuttering symptoms which can cause a delay in diagnosis; the attack has high morbidity and mortality. BAOs represent 1% to 4% of all ischemic strokes.

A fundraising page has been created to push for 24-7 access for clot-removal treatment. According to Breitbart News, New York City’s recently passed “Green New Deal” will reduce the amount of red meat served in city-run facilities by half.

This program is being conducted in the name of battling climate change.

This “Green New Deal” is different from Alexandria Ocasio-Cortez’s proposal at the federal level.

This local Green New Deal will slowly reduce the purchase of red meat in public schools, hospitals, and correctional facilities by 2040. The end goal is to cut meat purchases by 50 percent. The total costs of this program are estimated to be around $14 billion.

Through its passage of this iteration of the Green New Deal, New York is the first city in the world to enact this kind of measure.

The municipal Green New Deal comes right after New York City’s announcement to expand “Meatless Monday” to all public schools in the area starting in the 2019-2020 school year.

Despite being separate legislation from Ocasio-Cortez’s Green New Deal, both proposals share an emphasis on reducing meat consumption.

A divided Congress and a Republican controlled White House makes it next to impossible to pass the Green New Deal at the federal level for the time being.

As a result, climate change alarmists are now taking a page from the gun control movement’s playbook.

They recognize that they can’t get their legislation passed at the federal level, so they’ll work from the bottom up in municipalities and state legislatures.

However, the conversation on the Green New Deal is far from finished.

BLP covered Robert Francis ‘Beto’ O’ Rourke’s recent endorsement of the Green New Deal, in which he urged Americans to make sacrifices that were reminiscent to those of WWII.

As the Democratic Party goes further Left, the Green New Deal will likely be a major litmus test issue for future candidates. 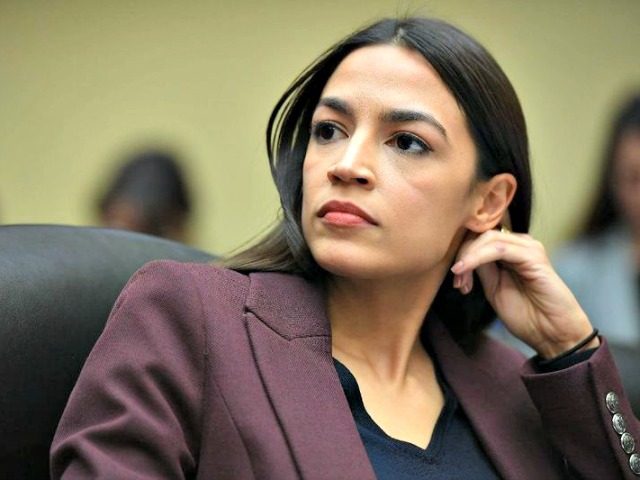 Rep. Alexandria Ocasio-Cortez (D-NY) on Thursday apparently mistook one of the most prominent Democrats in the House as a Republican, and mocked him for taking a photo with a cardboard cutout of her in a tweet.

The freshman congresswoman shared a tweet by the Republican Party of Kentucky that featured the House Budget Committee Chairman John Yarmuth (D-KY) taking a photo next to a cardboard cutout of her.

Apparently not realizing who Yarmuth was, she mocked him by tweeting, “GOP: Let’s pose our older male members next to cardboard cutouts of young female legislators”:

It is not the first time the 29-year-old Democrat has made an embarrassing gaffe on Twitter. She mixed up the wars in Iraq and Afghanistan just last month.

Ocasio-Cortez said recently on Yahoo’s Skullduggery podcast that she writes all her own tweets.

Her mistaking Yarmuth for an “older male” member of the Republican Party will likely not endear her to Democrat membership, who have increasingly made disparaging comments about her.

House Speaker Nancy Pelosi (D-CA) recently said a “glass of water” with a “D next to its name” could have won Ocasio-Cortez’s district.