While hysteria raged about possible Russian “interference” in the 2016 US election, British intelligence officials were secretly playing a “key role” in helping instigate investigations into Donald Trump, secret texts have shown.

“Turns out it was Britain that was the foreign country interfering in American affairs,” former MP George Galloway told RT, speaking about the new revelations published by the Guardian about early British involvement in the ‘Russiagate’ investigation.

The Guardian reported on texts between former deputy FBI director Andrew McCabe and Jeremy Fleming, his then counterpart at MI5, who now heads GCHQ. The two men met in 2016 to discuss “our strange situation” – an apparent reference to Russia’s alleged interference in US domestic politics.

British intelligence “appears to have played a key role in the early stages,” the report said.

Galloway said the revelation was not surprising because people “already knew” that British intelligence had played a part in the Russia-related investigations in the US. He recalled that it was former British spy Christopher Steele who drew up the now-infamous Steele dossier, which made multiple unverifiable and salacious claims about Trump and has since been largely discredited. Britain is “up to its neck in the whole Russiagate affair,” he said.

The texts also reveal that the Brexit vote was viewed by some in the FBI as something that had been influenced by Russia.

Asked what the UK stood to gain by trying to implicate Russia in a US election scandal at a time when then-foreign secretary Boris Johnson was dismissing baseless claims of Russian interference in the Brexit campaign, Galloway noted that Johnson’s comments on Russia have appeared to strangely sway between friendly and antagonistic.

Johnson is like “a sofa that bears the impression of the last person to sit upon him,” the former MP quipped. What happens next will depend on who is leading the tango, “the orange man in Washington or the blonde mop-head in London.”

In June 2016, the FBI opened a covert investigation codenamed ‘Crossfire Hurricane’ into Trump’s now disproven collusion with Moscow, which was later taken over by special counsel Robert Mueller.

Ultimately, the two-year-long probe that followed came up short, producing no evidence to prove a conspiracy or collusion between Trump campaign officials and Russia.

Texas Republican senator Ted Cruz’s recent Senate floor speech addressed the success President Trump has had in catching human traffickers with his “Rapid DNA testing” program. Implemented by the Department of Homeland Security as a pilot program at select locations, the DNA testing — which involves a cheek swab and roughly 90 minutes of testing time — is already catching human traffickers and making some smugglers admit their wrongdoing before even taking the test.

“I also learned of a recent pilot program that used rapid DNA tests to discover whether these family units were real. Nearly 30 percent were found to be fraudulent in the Rio Grande Valley-in other words, the adults bringing kids into the United States illegally weren’t related to the children,” Cruz stated.

Opponents of the program include CNN and the American Civil Liberties Union (ACLU).

If Trump was supposedly separating families as the Left claims, why fight a test to ensure parenthood so that these “families” can stay together?

Former Republican Arizona governor Jan Brewer said that President Donald Trump’s program — so far tested as a pilot — to test the DNA of adult migrants who bring children to the southern border is already catching human traffickers and “fraudsters.”

The Department of Homeland Security has rolled out a “pilot” program at a few select locations on the border that involves cheek-swabbing the migrants who come over the border and analyzing the results in the space of about an hour and a half.

Opponents of the program include CNN and the American Civil Liberties Union (ACLU).

If Trump was supposedly separating families as the Left claims, why fight a test to ensure parenthood so that these “families” can stay together? Fox Sports featured a Mexico fan with an anti-President Trump T-shirt after Mexico scored on the United States in the Gold Cup in a 1-0 Mexico victory. (h/t douglass_price).

The man’s T-shirt features the slogan “Chingue Su Madre” (a term for Motherf–er).

This brand of shirt is popular among Spanish-speaking anti-Trumpers. Don’t expect to see this in the liberal mainstream media!

Antifa terrorists attacked a black female Trump supporter on Saturday at the Rally for Free Speech in Washington DC.

The police escorted the woman away from the violent leftists who turned out to beat “racist” Trump supporters.
Antifa terrorists were determined to smash heads.
Police moved in to protect the peaceful Trump supporters.

Antifa in a gas mask pic.twitter.com/2O9xwQ4zH5 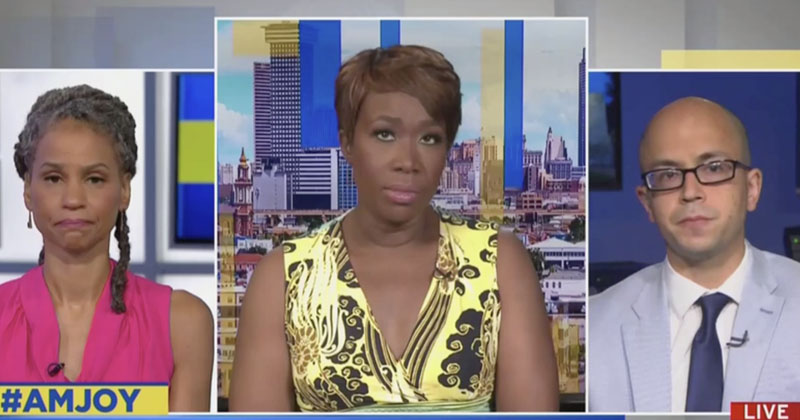 On her MSNBC show this morning, Joy Reid slurred Trump supporters as a bunch of sadists who want to see people at the border cruelly mistreated.

“I think I quote you every week, Adam: the cruelty is the point. That’s why they’re doing it, right? His base wants to see this. And so he’s showing them that he can dehumanize them. Isn’t that message coming from the White House, that essentially you don’t have to treat these people like human beings. Who cares?”

Reid’s mention of quoting Adam Serwer every week was a reference to his article in The Atlantic, “The Cruelty is the Point.”

Note: after agreeing with Reid that the White House is sending a message that the people at the border are “not real human beings,” Serwer added the caveat that the Trump admin is concerned, for PR reasons, about images of children allegedly being mistreated.

JOY REID: You know, the dehumanization of these folks, it did remind me, you know, Chris Hayes put up a post, it brings back sort of the memories of the way people treated others during the invasion of Iraq. The sense of, these aren’t even people. Or in our own past. The way that people were able to treat others, whether it’s from enslavement on. They’re just not people so we don’t have to think of them as human beings.

I think I quote you every week, Adam: the cruelty is the point. That’s why they’re doing it, right? His base wants to see this. And so he’s showing them that he can dehumanize them. Isn’t that message coming from the White House, that essentially you don’t have to treat these people like human beings. Who cares?

ADAM SERWER: I do think the message is coming from the White House that these people are not real human beings and you don’t have to treat them properly.

Democratic frontrunner and former VP Joe Biden has been mocked for saying that no election interference happened on his watch. Some took his words as a denial of the establishment narrative about 2016 ‘Russian meddling’.

Risking an own goal against fellow politicians and the ‘intelligence community’, which accuse Russia of meddling in the 2016 US election to sow discord and help Donald Trump ascend to the presidency, Biden told CNN on Friday that no election interference happened on his watch, as he unloaded on both Trump and Russian President Vladimir Putin.

The counter-intelligence probe into possible links between the Trump campaign and Russia that later grew into the full-blown Russiagate conspiracy theory, was launched by the FBI in July 2016, half a year before Biden and Obama left the White House. The events that were scrutinized by federal investigators and later by Special Counsel Robert Mueller’s team on their desperate hunt for a Trump-Russia connection, including the infamous Trump Tower meeting of June 2016, all happened on Biden’s watch. Cuomo, however, didn’t challenge the ex-VP on the timing discrepancies.

READ MORE:  Calculated Kamala? Harris accused of cashing in on segregation with $30 T-shirt

The self-confessed Gaffe Machine’s words prompted derision as well as confusion on Twitter, with some asking if Biden has suddenly broken ranks with fellow Democrats in their belief there had been a Kremlin-led malicious campaign to undermine American democracy.

“So Biden’s admitting that Putin and Russia didn’t interfere with the election that happened during his watch?” one person wrote.

So Biden's admitting that Putin and Russia didn't interfere with the election that happened during his watch? pic.twitter.com/67NyiH8YoD

Some went as far as urging Biden to retire from politics, calling his campaign a “disaster.”

Communist Charged With Felony, Media Provides Sneaky Defense Of Antifa. Recently in Washington DC several communists tried to light an American Flag eventually succeeding and throwing it on a Secret Service agent. One person was charged with a felony over the incident.

But this recent news gives rise to a larger question. Why does the media insist on defending the far left? The answer is obvious, the media has a left wing bias. While its not a far left bias it is becoming so. When dealing with the issues of Antifa and right wing groups the media will allow the far left to define itself and its goals while also allowing the far left to define the right and what they believe their goals to be. In this framing the right will always be bad and the left will always be good, even when the media is forced to condemn certain actions. Following the Andy Ngo incident the Portland Chief of Police has called for unmasking laws saying that Antifa should not be allowed to wear masks as it allows them to escape justice. So long as these groups are allowed to define themselves the media will continue to claim this is a group fighting for social justice who sometimes makes mistakes instead of the bad guys they really are. #FarLeft #MediaBias #FakeNews 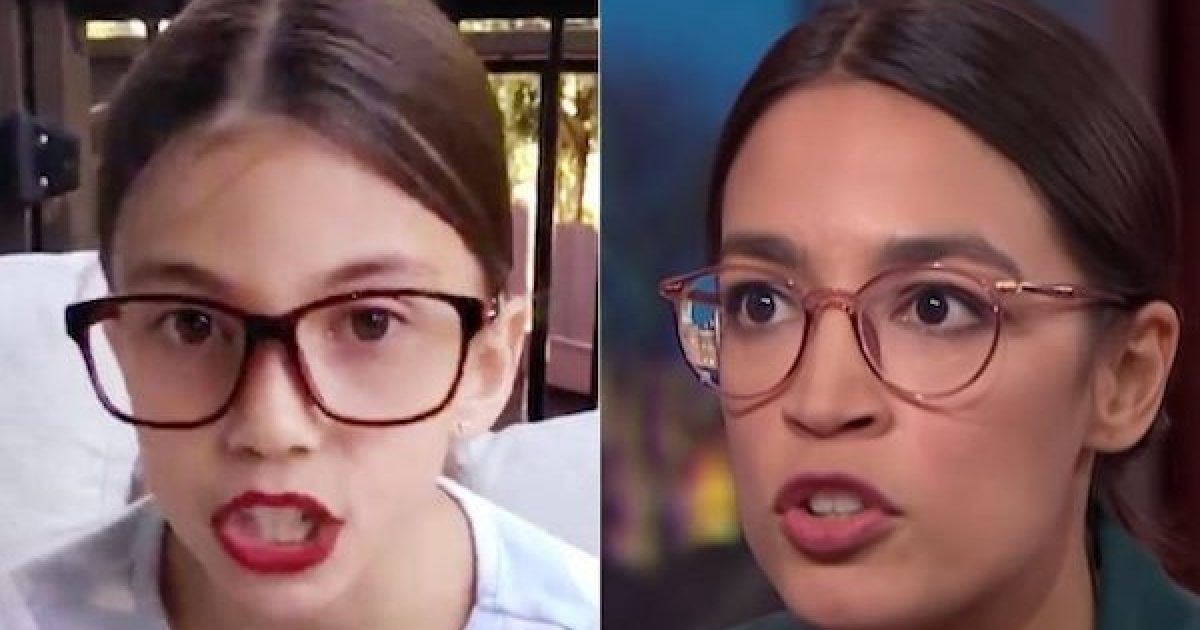 This isn’t just anti-American, it’s sick! She is a little girl… only 8-years-old  Until this moment I think I never really gauged the liberals cruelty or their recklessness.

But the crazy liberals have threatened to kill a little girl because she goes against their leftist political agenda. Ava Martinez who has been playing “Mini AOC” had been doing some hilarious riffs on social media making fun of Alexandria Ocasio-Cortez. But her step-father has announced she’s deleted her social media account and has stopped her funny videos because liberals doxxed her after discovering her home address, and flooded her home with death threats.

“Ava will not being doing any more MINI AOC content,  The Left’s Harassment and death threats have gone too far for our family. We have been getting calls on our personal phone numbers. For our safety and for our child’s safety, we deleted all Mini AOC accounts.

Apparently, most of the feedback “Mini AOC” received was very positive but after she posted pictures making fun of the staged AOC crying at the border pictures the feedback became “increasingly personal, dark, and dangerous.”

In an interview with Fox News Schachter said

“She’s disappointed at not doing Mini AOC going forward but we explained that this is for the best and she’s okay with it,”Schachter said.

Ava’s family had one message for those on the left who harassed her and her family.

“The world has seen Ava’s beauty, talent, and charm, which was the whole reason for Mini AOC to begin with and no amount of hate or anger will change that,”Schachter told Fox News. “Also, like Ava says, ‘try using your words.”

“Mini AOC’ fans on twitter were saddened at the news:

No, Matthew, AOC hasn’t denounced the threats to “Mini-AOC,” nor has anyone in the Democratic Party spoken out. It is early and yesterday was July 4th—but I wouldn’t hold my breath anyway Dems don’t apologize.

Folks, the same lefties who are freaking out because there are kids in detention centers, doxxed and threatened a kid who poked fun at a politician. A nine-year-old kid did nothing wrong, but America’s left has proven once again, they are bullies with no sense of decency.