The communists claim another scalp.

“Why bother with a milkshake?”

A left-wing comedian in the United Kingdom says she fantasizes about acid-attacking right-wing politicians, asking “why bother with milkshakes?”

During an appearance on Radio 4 last night, Jo Brand, who is a lifelong Labour Party supporter, tacitly endorsed political violence.

“Certain unpleasant characters are being thrown to the fore, and they’re very, very easy to hate, and I’m kind of thinking, why bother with a milkshake when you could get some battery acid?” asked Brand.

"They’re very, very easy to hate, and I’m kind of thinking, why bother with a milkshake when you could get some battery acid?"

I can feel the progressivism and tolerance from here. pic.twitter.com/fpidFjIl8J

“That’s just me, sorry, I’m not gonna do it, it’s purely a fantasy, but I think milk shakes are pathetic, I honestly do. Sorry,” she added.

“This is incitement of violence and the police need to act,” tweeted Nigel Farage, who was ‘milkshaked’ by a leftist while on the campaign trail last month. 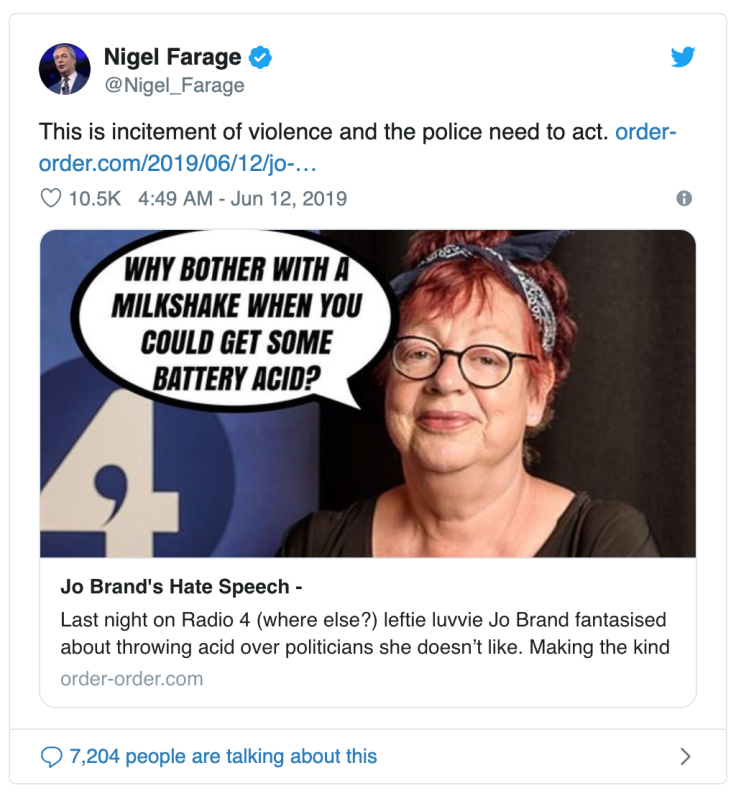 While Brand’s vicious suggestion may have been made in jest, there are plenty of unhinged, radicalized leftists who are only too willing to actually carry out such an attack.

As we previously reported, a left-wing activist who works for a charity called ‘Happy City’ called for Nigel Farage to be acid attacked before deleting the tweet.

“Bravo to Paul Crowther, good on you mate. Great that milkshakes have become a thing when it comes to racists in our midst,” tweeted Ruth Townsley, before adding, “I’d prefer acid but milkshakes will do for now I guess.”

So much for the tolerant left! 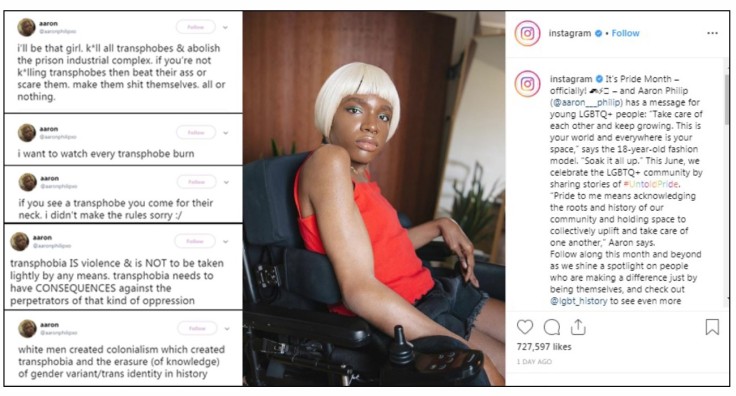 After banning tons of conservatives for their “dangerous” political views, Facebook-owned Instagram promotes trans disabled model actively calling for the “killing” of all “transphobes.”

Facebook-owned Instagram on Monday promoted “trans disabled model” Aaron Philip, 18, across their platform and to their more than 304 million followers in honor of Pride Month.

It’s Pride Month – officially! 🌈⚡️🦄 – and Aaron Philip (@aaron___philip) has a message for young LGBTQ+ people: “Take care of each other and keep growing. This is your world and everywhere is your space,” says the 18-year-old fashion model. “Soak it all up.” This June, we celebrate the LGBTQ+ community by sharing stories of #UntoldPride. “Pride to me means acknowledging the roots and history of our community and holding space to collectively uplift and take care of one another,” Aaron says. Follow along this month and beyond as we shine a spotlight on people who are making a difference just by being themselves, and check out @lgbt_history to see even more stories of #UntoldPride. Photo of @aaron___philip by @ohmakeda 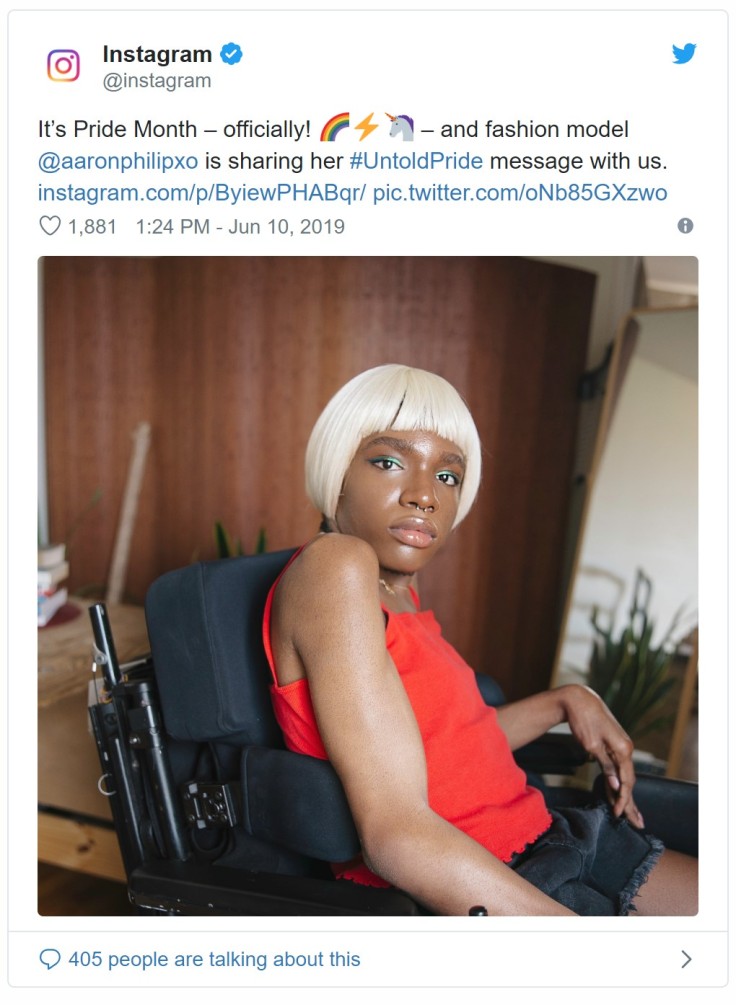 It’s Pride Month – officially! 🌈⚡️🦄 – and Aaron Philip (@aaron___philip) has a message for young LGBTQ+ people: “Take care of each other and keep growing. This is your world and everywhere is your space,” says the 18-year-old fashion model. “Soak it all up.” This June, we celebrate the LGBTQ+ community by sharing stories of #UntoldPride. “Pride to me means acknowledging the roots and history of our community and holding space to collectively uplift and take care of one another,” Aaron says.

Follow along this month and beyond as we shine a spotlight on people who are making a difference just by being themselves, and check out @lgbt_history to see even more stories of #UntoldPride.

Philip wrote on Twitter: “i’ll be that girl. k*ll all transphobes & abolish the prison industrial complex. if you’re not k*lling transphobes then beat their ass or scare them. make them shit themselves. all or nothing.”

Philip wrote in another tweet: “i want to watch every transphobe burn.”

One day before Instagram’s campaign kicked off, Philip wrote: “you don’t have to be civil and kind to transphobes. no. raise hell.”

Philip wrote: “if you see a transphobe you come for their neck. i didn’t make the rules sorry :/”

Philip suggested earlier this year that “white men” were responsible for creating transphobia: “white men created colonialism which created transphobia and the erasure (of knowledge) of gender variant/trans identity in history.”

After being criticized for “talking down on black men” but not saying enough about “white male toxic behavior,” Philip responded: “are you dumb? the point of criticizing patriarchy in general is literally to criticize white men & the oppressive structures they’ve imposed upon the world as we know it. however, every and any man benefits from patriarchy by being men & having those privileges. shut the fuck up.”

Even though the policy specifies YouTube will only remove content that promotes violence or hatred towards “individuals or groups” based on that attribute, conservatives are concerned the policy will be used to justify the removal of accurate criticism of immigration policies.

“This is YouTube taking a left-wing political stance. Censorship of conservative opinions is getting worse on social media.”

Given Big Tech’s track record of left-leaning bias, simple criticism towards immigration being viewed as “hate” is likely.

Case in point, YouTube recently demonetized popular comedian/conservative YouTuber Steven Crowder after he was accused of targeted harassment for his gay jokes directed at a Vox editor.

Steven Crowder Is The Next Target Of Corporate Censorship 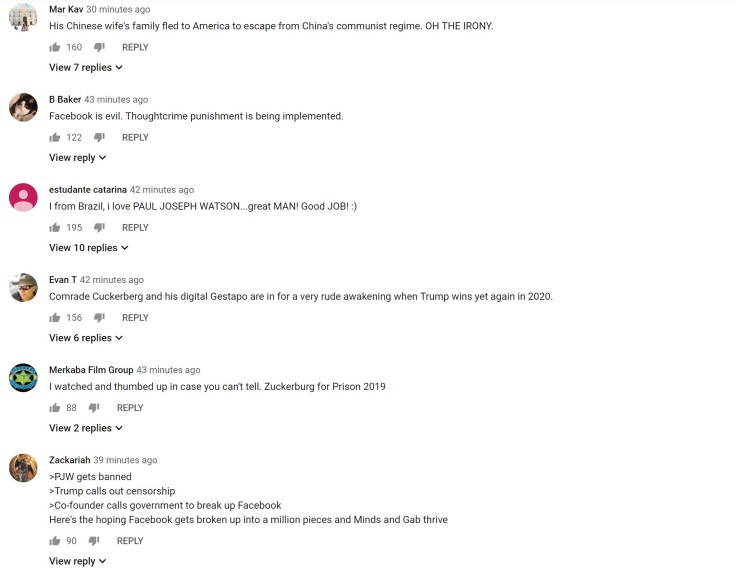 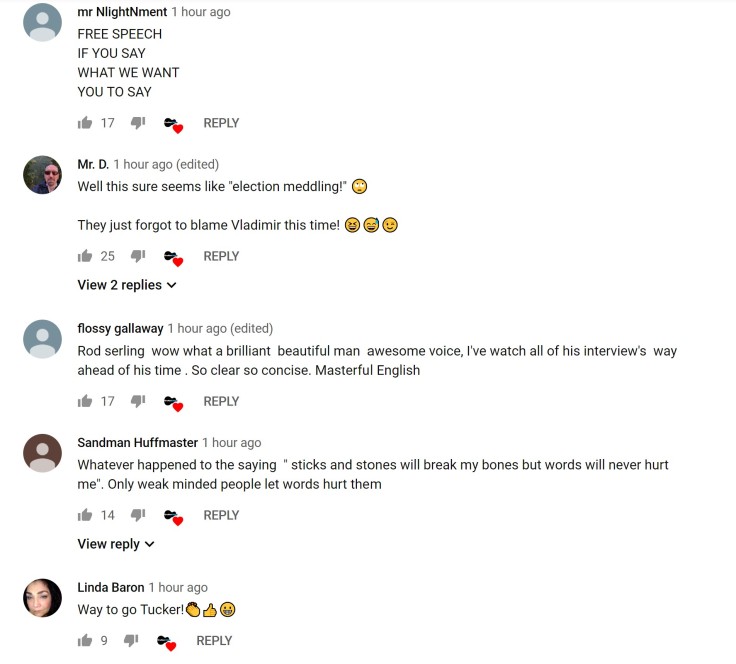 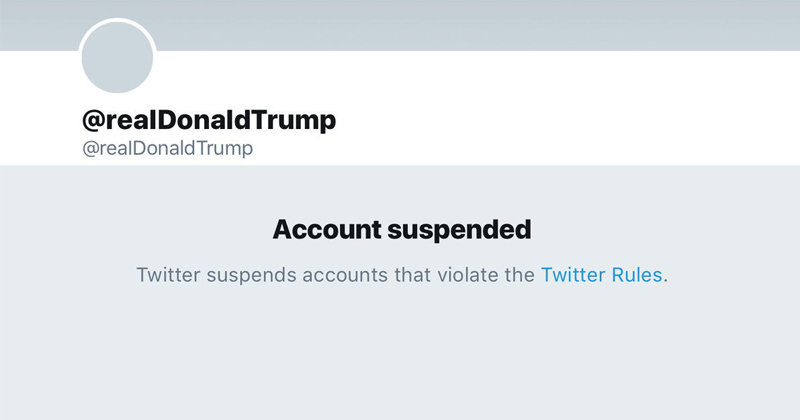 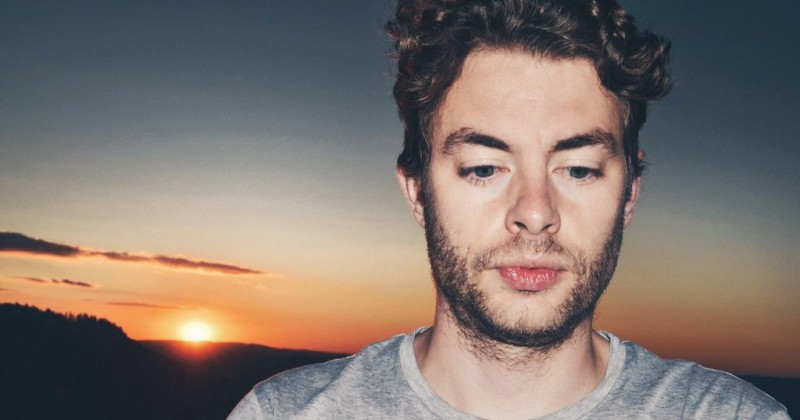 Here’s how you can help

Facebook and the mainstream media are trying to silence me by falsely labeling me an “extremist”.

Conservatives and anyone who challenges the leftist orthodoxy are being deplatformed.

People have asked how they can support me.

I have created a SubscribeStar at https://www.subscribestar.com/paul-joseph-watson

The fight back against censorship requires resources.

I appreciate you having my back more than ever.

Please consider giving a small amount here if you wish to protect my voice from being silenced.

Or if you prefer, you can make a one time Paypal donation here.

Also, it’s imperative that you sign up for my free newsletter here so we can stay in touch. 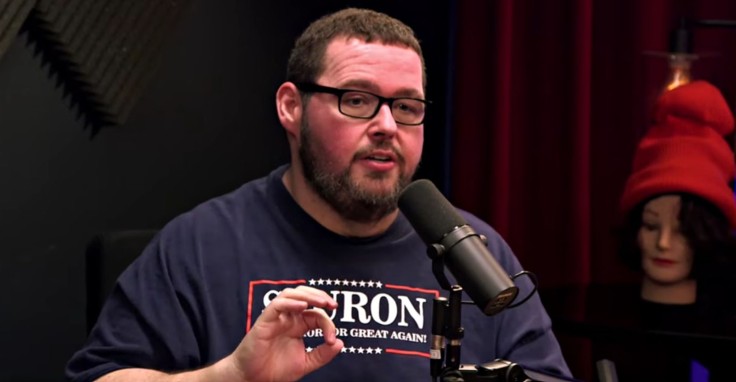 Boogie revealed that the tech censorship crisis may be inspired, at least partially, by advertisers’ desire for a lower rate.

During an appearance on the H3 podcast, the famous YouTuber revealed a personal conversation he had with a contact in Walmart advertising who said they do not care about big tech censorship, but are looking forward to the lower advertising rates they expect to pay as a result.

This has been YouTube’s excuse to demonetize popular right wing channels, and likely went into consideration for Twitter when they summarily banned Infowars, and Facebook and Instagram last week when they went a step further and said they would ban any user who so much as posted a link to Infowars video content or Alex Jones.

Boogie2988, a YouTube streamer who became famous for his parody videos, video game live streams, and for chronicling his weight loss journey, offered a nuanced take during the podcast.

He continued, quoting his conversation with an anonymous Walmart advertising employee, “‘We care about lowering our bids, so we’re going to do a six months or one year hiatus, and when we come back, we’re going to have much lower bids.’”

Was watching clips from @Boogie2988's appearance on the @h3h3productions podcast and I think what he said about advertisers leveraging censorship disputes to lower their rates is really important to hear. Full clip: https://t.co/BGoqw6Ws0y pic.twitter.com/3KjtAfhkpO

If true, it would seem the exodus of large advertisers from big tech platforms, and the sacrifice of many large content creators that followed, may be driven almost entirely by finance.