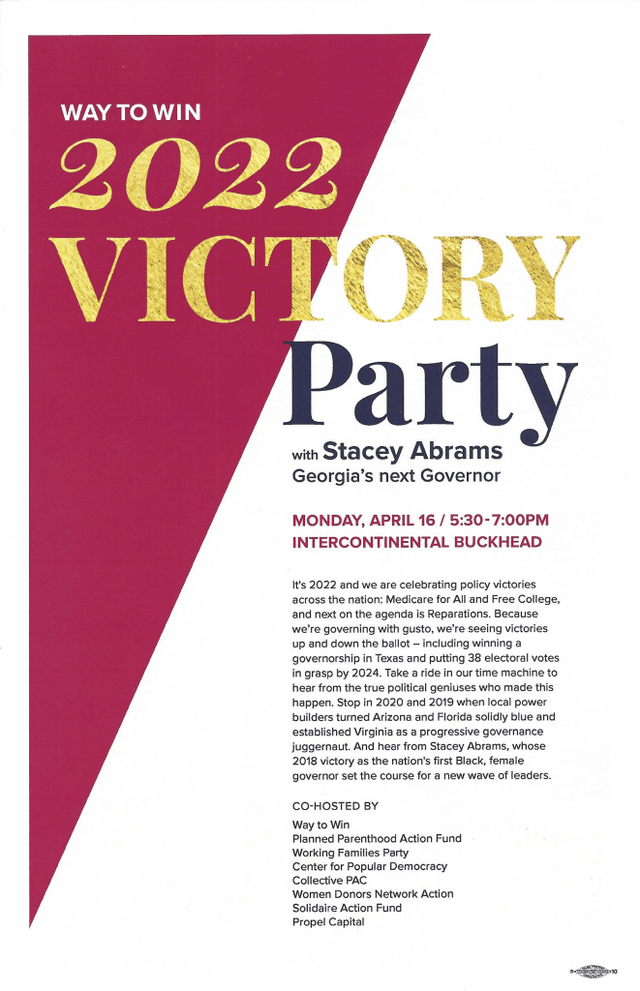 The flyer touting an event with Stacey Abrams in Atlanta earlier this week read like a left-leaning activist’s fantasy: It’s 2022 and “we’re celebrating Medicare for All and Free College, and next on the agenda is Reparations.”

It invited progressives to hop in a time machine and imagine they are hearing from Abrams, a former Georgia House Democratic leader running for governor, after she “set the course for a new wave of leaders.”

“Because we’re governing with gusto, we’re seeing victories up and down the ballot—including winning a governorship in Texas and putting 38 electoral votes in grasp by 2024,” it read. Abrams said she and other candidates spoke at the Democracy Alliance’s Monday conference, a meeting of progressive activists and financiers that aimed to chart the party’s course. But she said the topic of reparations – payments to the descendants of slaves – did not come up.

Instead, her campaign said the event focused broadly on building power for progressives. It also said she didn’t organize or sponsor the event or have any role in making the flyer.

In a statement, Abrams touted her plans to address access to education, criminal justice initiatives and voting rights – “plans which serve all Georgians but also include specific solutions communities need to overcome structural barriers to opportunity.”

Abrams, who is running to be the nation’s first black female governor, faces former state Rep. Stacey Evans in the May 22 primary. The two have clashed on a range of issues, including gun control votes, tax cut plans and competing strategies to win in November.

Neither candidate has talked about reparations on the campaign trail. And neither commented about the debate when asked Wednesday by the AJC. The Democracy Alliance attracted dozens of wealthy donors and leaders of left-leaning organizations to plot out the party’s future.

California billionaire Tom Steyer, who has pumped $20 million into a movement to impeach Donald Trump, was in town during the meeting. And several candidates for state office were seen mingling in the crowd at the InterContinental Buckhead Atlanta, where Planned Parenthood officials announced earlier Monday the group endorsed Abrams.

The Washington Free Beacon first reported about the event.

The “2022 Victory Party” event was organized by a coalition of organizations that include Planned Parenthood, Collective Action PAC and Propel Capital. Several of the groups declined to comment on the flyer.