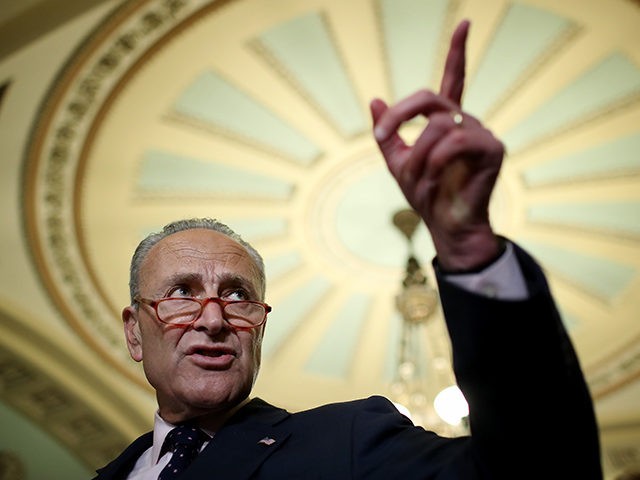 “Racism is the poison in America, it’s in the American bones, unfortunately,” Schumer said as voiced support for H.R 40, a bill championed by Rep. Sheila Jackson Lee (D-TX) that would create a commission to study the issue of reparations. “The legacy of slavery and Jim Crow is still with us,” added Schumer.

The debate over reparations catapulted from the campaign trail to Congress last month when lawmakers heard testimony for and against the idea of providing compensation for slavery. On June 19th, the House Judiciary Subcommittee on Constitution, Civil Rights and Civil Liberties held a hearing on Jackson Lee’s bill. The panel invited 2020 White House hopeful Sen. Cory Booker (D-NJ), Hollywood actor and left-wing activist Danny Glover, author Ta-Nehisi Coates, and others to discuss the measure re-introduced in January.

Booker, who testified first before the panel, said the country has “yet to truly acknowledge and grapple with the racism and white supremacy that tainted this country’s founding and continues to cause persistent and deep racial disparities and inequality.”

“The stain of slavery was not just inked in bloodshed, but in policies that have disadvantaged African Americans for generations,” the lawmaker added.

Earlier this year, Booker introduced a version of Jackson Lee’s measure to the Senate.

Following Booker was Glover, who called establishing a national policy on reparations a “moral, democratic, and economic imperative.”

“Despite much progress over the last centuries, this hearing is yet another important step in the long and heroic struggle of African-Americans to cure the damages inflicted by enslavement, post-emancipation and forced racial exclusionary policies,” Glover told lawmakers

The hearing came amid a growing discussion in the Democrat Party about reparations. Several of the party’s presidential candidates have endorsed looking at the idea.

Senate Majority Leader Mitch McConnell (R-KY) has said that he opposes reparations, telling reporters: “I don’t want reparations for something that happened 150 years ago. We’ve tried to deal with the original sin of slavery by passing civil rights legislation.”

“It would be hard to figure out who to compensate” for slavery, the Kentucky Republican noted. “No one currently alive was responsible for that.”

The Kentucky Republican noted that he and former President Barack Obama have opposed reparations, and “both are the descendants of slave owners.”

The Associated Press contributed to this report.