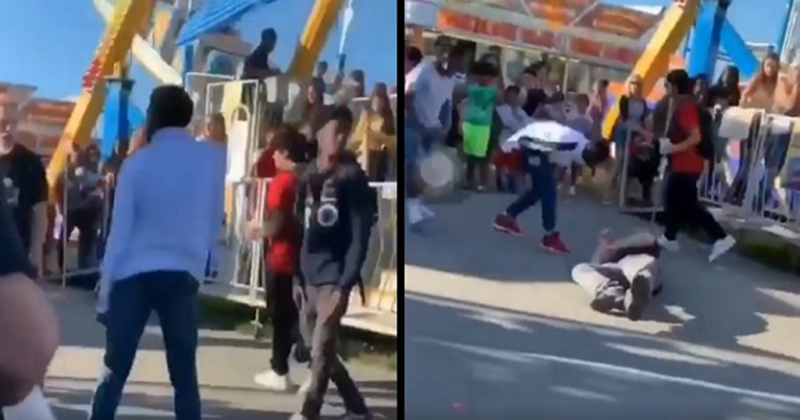 If the races were reversed in this killing it would be the most popular story in the entire country with wall-to-wall media coverage and politicians demanding “action.”

Two teenage brothers allegedly fatally attacked 59-year-old John Marvin Weed at a fair in Frederick, Maryland and spit on him while he was on the ground because “he declined to give them $1.”

Two teenage brothers fatally attacked a man at an agricultural fair in Maryland after he refused to give them money, authorities said.

John Weed, 59, of Mount Airy was at the Great Frederick Fair Friday evening when the 15-year-old and 16-year-old approached him, authorities said. Several minutes after he declined to give them $1, the 15-year-old knocked him unconscious, prosecutors said.

“I think it’s despicable, and it tells me a lot about how these young people view this person by the very fact after they had him on the ground they taunted and they spit on him,” Frederick County Sheriff Chuck Jenkins said. “That to me shows hatred and disgust and despise.”

Medics flew him to the R Adams Cowley Shock Trauma Center in Baltimore. He died there Saturday, the sheriff’s office said.

This is allegedly video of the attack:If the races were reversed in this killing it would be the most popular story in the entire country with wall-to-wall media coverage and politicians demanding “action.”

Instead, most Americans will never even hear John Marvin Weed’s name.

Frederick is a city in western Maryland where Marylanders fled to to escape the “cultural enrichment” in and around Washington, DC and Baltimore.
https://twitter.com/Shane2323/status/1175809797200826369

Like most of Maryland, it used to be a very nice place to live but just so happens to be going downhill in accordance with a massive population shift.

On Friday September 20th, Jay (John Weed) went to the Great Frederick County Fair to spend an evening of fun and laughter with his sister, his nieces, their loves ones and his great niece and nephew. At 5:30pm he fell victim to an unprovoked, physical assault. He was air lifted to Shock Trauma in Baltimore, where they did everything they could to save his life. The damage to his brain was too severe. He was not coming back. Late Saturday afternoon with his Mother, Father and sister by his side he passed away. Please help my family during this extremely difficult time. We never imagined such a great man would have to die like this. We are seeking justice for him but will have to fight. Anything you can do is appreciated and will be used towards legal cost, medical bills, and funeral costs.