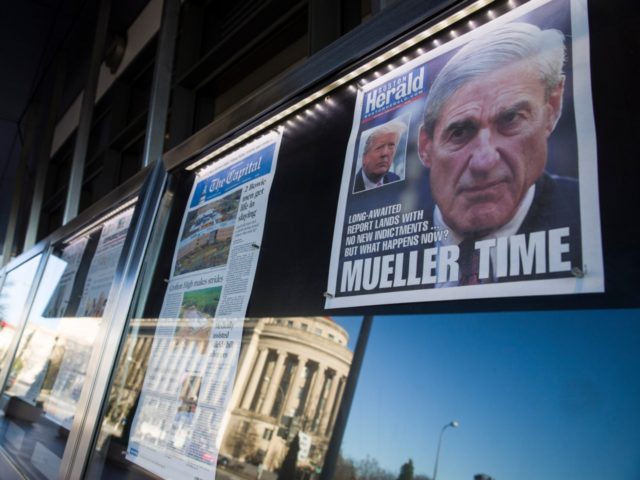 The disgraceful team of partisan investigators hired by Dirty Cop Robert Mueller just disgraced themselves further through a series of unforgivable leaks to the fake news media.

Obviously angry over the fact President Trump is so innocent they could not even come up with a way to frame him, “Some of Mueller’s investigators,” the far-left New York Timesreports, “have told associates that Attorney General William P. Barr failed to adequately portray the findings of their inquiry and that they were more troubling for President Trump than Mr. Barr indicated.”

Told associates *wink-wink* — Oops, I had no idea *wink-wink* it would make the front page of the Times! *digs toe in dirt*

These sleaze bags are also leaking (through more “associates!”) to the far-left Washington Post.

“Members of Mueller’s team have complained to close associates that the evidence they gathered on obstruction was alarming and significant,” the Post reports. “‘It was much more acute than Barr suggested,’ said one person, who, like others, spoke on the condition of anonymity because of the subject’s sensitivity.”

Of course, and just like the entire Russia Collusion Hoax, none of these complaints makes a lick of sense because it was not just Barr who signed off on the four page Mueller Report summary that cleared Trump of collusion and obstruction; Deputy Attorney General Rod Rosenstein also signed off on the summary and Rosenstein, if you recall, is the original Dirty Cop who appointed Mueller in the first place.

What’s more, when you are talking about a special counsel, this kind of exoneration is almost always unprecedented. In the past, these investigations have always hit pay dirt,  always — by hook or crook — found a way to justify their existence, which was no doubt Mueller’s plan when he hired only partisan Democrats to join his hunt.

But these Dirty Cops found nothing on Trump, nada, bupkis — a big, fat, stinkin’ zero.

Oh, sure they found some old crimes no one cared about until the accused went to work for Trump.

Oh, sure they found a few Russians who spent a few bucks on Facebook ads, most of them in opposition to Trump.

Oh, sure they destroyed the life of retired Lt. Gen. Michael Flynn by threatening his son over a contrived process crime.

Trump, however, is so freakin’ innocent they couldn’t even rig a frame for him, so now Mueller’s Dirty Stinkin’ Cops are pouting and bitter and vengeful and violating every known legal ethic to smear Trump in the court of public opinion by way of the sleaziest kind of innuendo imaginable.

You see, these Dirty Cops know how it works…

If you recall, this is what disgraced former FBI Director James Comey did to Hillary Clinton. This is why everyone believed she was going to be charged over her email server — because Comey downloaded on her, publicly laid out her crimes … before telling us she would not be charged.

No matter what you think of Hillary or the crimes she committed, no matter how unjust the decision was to let her off the hook, if someone is not going to be charged it is unethical and un-American for a lawman to do what Comey did — to lay out his case against her.

So what Mueller’s Dirty Cops are trying to do here is put Trump and Barr in a Catch 22.

You see, if Barr does the right thing, if he is an honorable attorney general (and American), when he does release what he can of the 400 page Mueller Report next week, other than the top-line findings (no collusion, no obstruction) nothing else will be made public about Trump or anyone else who was not charged with a crime.

We don’t do that in this country.

But now that Mueller’s Dirty Cops have left this trail of slime, the Russia Collusion Hoax can live on forever!

In a tweet late Wednesday, Trump’s legal counsel, Rudy Giuliani, got it exactly right after the leaks hit the fake media.

“The NYT story about unspecified troubling findings in report is as accurate as the NYT saying Mueller’s staff didn’t leak,” Giuliani wrote. “Who leaked this…Mueller’s unethical staff. This proves they are Angry Democrats who couldn’t find or create evidence to support collusion or obstruction.” 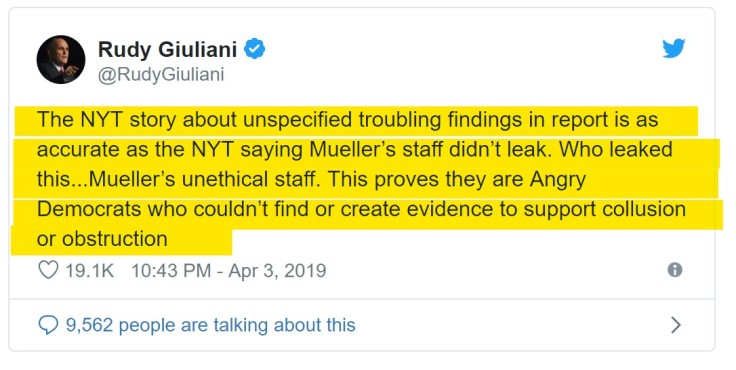 During a Fox News appearance, he went even further:

[These leaks] makes the point that we’ve been making for two years: Despite all of the media reports about how holy and sanctimonious the Mueller team is, they are a bunch of sneaky, unethical leakers, and they are rabid Democrats who hate the president of the United States.

And I can’t tell you how much false information they leaked during the course of the investigation. How many people are going to be indicted that didn’t get indicted? How many — how many blockbusters were there? Starting with Papadopoulos and ending with Cohen, who turns out to be a serial liar. I mean, how could you have any confidence in this?

If only through his presence and victory, Trump has accomplished an invaluable service in exposing the Justice Department, the F.B.I., the corporate media, and the intelligence community as an un-American cabal of venal, power-mad, entitled thugs with no respect for the rule of law or the Constitution.

Never again will these sleazy bastards be trusted, because they cannot be trusted. The corruption, the arrogance, the incompetence, the desire to rule over us, to overturn elections that do not come out their liking…

From Iraq to Trump — these monsters can all go straight to Hell.