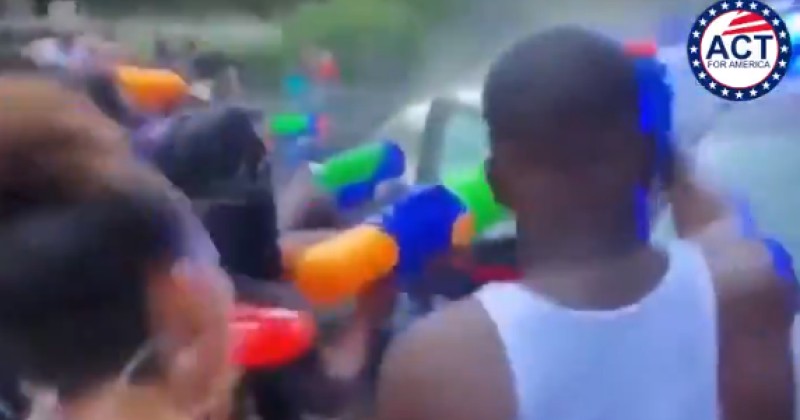 Trend appears to be spreading

The disturbing lawless trend of police officers being ‘water bombed’ by large gangs of young people appears to be continuing with a video out of Atlanta showing a cop getting completely doused.

The video shows dozens of people with water guns aimed at a police officer who tries to retreat to his squad car for safety.

The officer is massively outnumbered and visibly agitated as the mob surrounds him.

So far, each of these attacks have been waged by minority inner-city mobs. People who have been systematically TAUGHT by progressives to hate law enforcement, e.g. Booker, Harris, DeBlasio, BLM, AOC+3, etc.etc.#BackTheBlue pic.twitter.com/VgjPHKSEev

Earlier this week, we highlighted other examples of the same trend in Harlem and Brooklyn, where cops were doused with water and one had a bucket thrown at his head.

The fad serves to illustrate how there is a growing sense of lawlessness and a total lack of respect for police officers in major cities.

Following the incidents in New York, NYPD sources blamed Mayor Bill de Blasio for creating a climate that is soft on crime.

President Trump then waded into the debate, calling the incidents a “total disgrace” on calling on de Blasio to take action.

The Mayor responded by tweeting, “Crime’s gone down year after year in New York City and it’s not just because you finally left town.”

How long it will be before those figures start to rise given the seemingly rampant disrespect for police in New York remains to be seen.