A writer for New York Magazine has rehashed his most outlandish theory that US President Donald Trump could have been a Russian asset since the 1980s — and has been mercilessly mocked on Twitter for his efforts.

Proving that Russiagate is the conspiracy that just won’t die — even in light of the Mueller report which found no evidence of collusion between the Trump campaign and Russia — New York Magazine writer Jonathan Chait has revisited a piece he published in July 2018 in order to see how well it holds up today.

The article in question — which made the magazine’s front cover — extravagantly contended that Trump could have been compromised by Moscow as far back as 1987. That claim holds up “extremely well” today according to Chait, who doubled down on Twitter on Tuesday, insisting that Russia holds “secret leverage” over Trump. But Chait must have read a different summary of the Mueller report than everyone else. In his new piece, he asserts that rather than his “collusion” theories being debunked by the report, his “most important predictions and claims”were actually “vindicated.” Indeed, the clairvoyant Chait claims that he was in fact “ahead of the interpretive curve”last summer and everyone else was just catching up.

Unsurprisingly, Chait was instantly ridiculed on Twitter. Journalist Glenn Greenwald joked that he should “make room for the Pulitzer,” while Russiagate critic Aaron Mate wondered if the Mueller report had made any use of his “damning evidence” against Trump.

When NY Mag tweeted out the piece, it faced an onslaught of mocking responses. One Twitter user suggested that Chait’s latest rant was probably ready to publish on Monday, but the editors held off “because it would cause too much April Fool’s confusion.”

One commenter dubbed Chait “the Alex Jones of NY Mag” while another urged the magazine to fire him, given that he has “no familiarity with facts or burden of proof.”

Chait also insists in his new piece that journalists skeptical of Russiagate have not managed to debunk his “major conclusions” from last summer — but then again, it’s difficult to debunk crazy theories that exist only in the minds of their hosts, as another Twitter user pointed out. 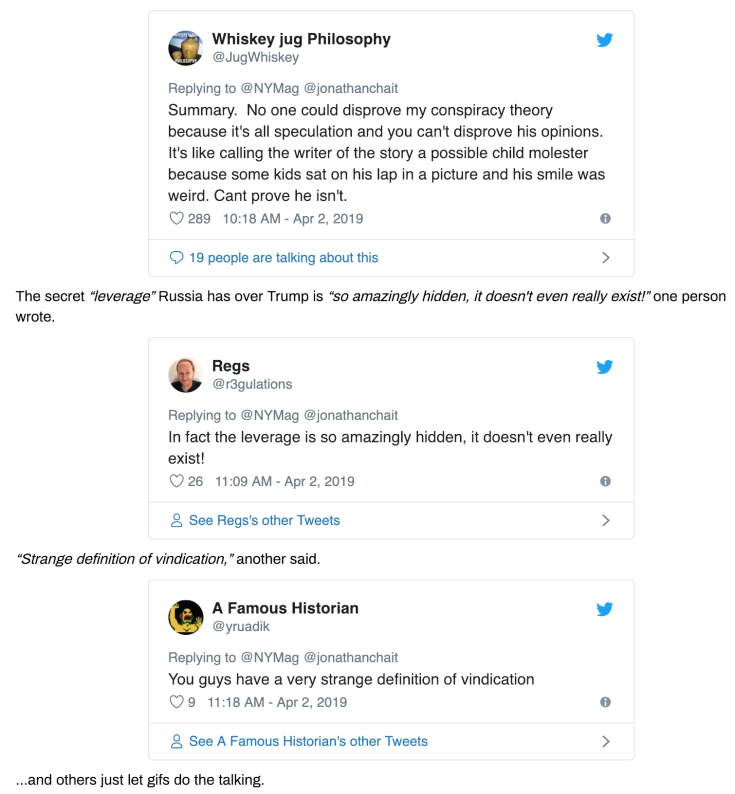