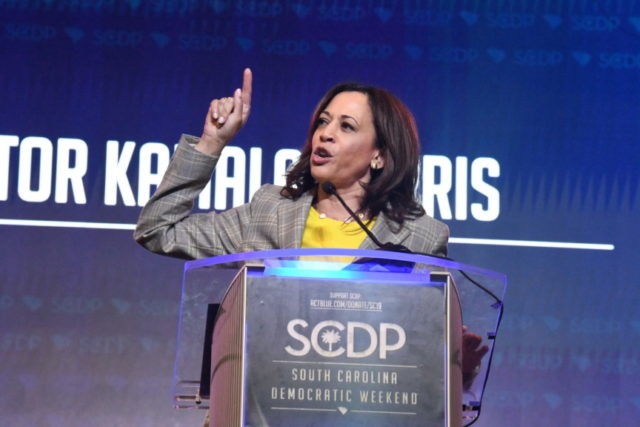 Sen. Kamala Harris (D-CA) believes that “writing a check” to the descendants of slaves is not “going to be enough” when it comes to reparations.

In an interview with Jemele Hill’s podcast that was released on Monday evening, Hill, playing a game of “for or against,” asked Harris if she was “for or against” reparations. Harris answered: “complicated.” Hill, who interviewed Harris during Essence Fest in New Orleans, told her “that wasn’t one of the choices.” “We need to address how we’re going to do it… because back to the point I was making about home ownership…back to the point I was making about disparities around education… you can look at health outcomes when you know that black women are three to four times more likely to die in connection with child birth,” Harris said. “So there’s a lot that has to be about looking at this in a way that is about structural and systemic investment in communities.”

Harris said she was “reluctant” to give a simple answer on the issue because she fears Americans will not want to talk about structural and systemic inequalities that reparations advocates have argued have been compounding if the government just writes checks to the descendants of slaves.

“So that’s why I’m reluctant to have a simple answer to it because frankly I don’t believe that writing a check is gonna be enough,” Harris told Hill. “I really don’t… And the worst thing that I think could happen is that checks get written and then everybody says ‘ok, stop talking about this now’ without addressing the systemic inequities that are deep and require investment.”

Harris previously told The Root that “there has to be some form of reparations”—even for “undiagnosed and untreated trauma”—because “we’re looking at more than 200 years of slavery” and “almost a hundred years of Jim Crow.”

“We’re looking at legalized segregation and, in fact, segregation on so many levels that exists today, based on race,” she told The Root earlier this year. “And there has not been any kind of intervention done understanding the harm and the damage that occurred to correct course, and so we are seeing the effects of all of those years play out still today.”

One thought on “Kamala Harris on Reparations: ‘Writing a Check’ Not ‘Gonna Be Enough’”