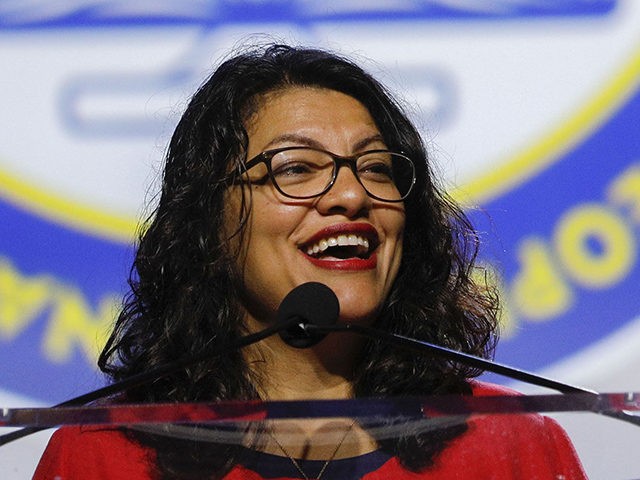 Rep. Rashida Tlaib (D-MI) declared Monday that she is “not going nowhere, not until I impeach this president,” in a speech before the NAACP national convention in Detroit.

"Yeah, I'm not going nowhere! Not until I impeach this president," Rep. Tlaib says as she takes the stage at the NAACP convention in Detroit. pic.twitter.com/2OqfxzwUwM

Tlaib’s pledge comes after the president has repeatedly challenged the Michigan lawmaker and fellow “Squad” members — Reps. Ilhan Omar (D-MN), Rep. Alexandria Ocasio-Cortez (D-NY), and Ayanna Pressley (D-MA) — to leave the United States over their frequent attacks on the country.

“We need bold action, folks. I know what’s happening out there… it’s beyond just the four of us,” Tlaib told the crowd. “The squad is all of you. I can tell you, you are all the squad, trust me. If you support equity, you support justice, you are one of us.”

Tlaib, the first Palestinian-American woman in Congress, infamously called for President Trump to be removed just hours after being sworn as a House member earlier this year, pledging to progressive activists, “we’re gonna go in there and we’re going to impeach the motherfucker.”

President Trump on Monday re-upped his criticism of Tlaib and the “Squad,” tweeting that the far-left clique is a “very Racist group of troublemakers who are young, inexperienced, and not very smart.”

“They are pulling the once great Democrat Party far left, and were against humanitarian aid at the Border…And are now against ICE and Homeland Security. So bad for our Country!” he added.

Tlaib, of course, is no stranger to controversy.

The Michigan Democrat has repeatedly come under fire for uttering antisemitic statements since arriving in Washington last year, including falsely claiming Palestinians offered a “safe haven” for Jews fleeing the Holocaust, whitewashing Palestinian opposition to Jewish immigration and its leadership’s collaboration with Adolf Hitler.

Despite Tlaib and Omar both denying they are antisemitic, the pair of Muslim lawmakers co-introduced a measure last week that supports the anti-Israel Boycott, Divestment, and Sanctions (BDS) movement against the Jewish state.