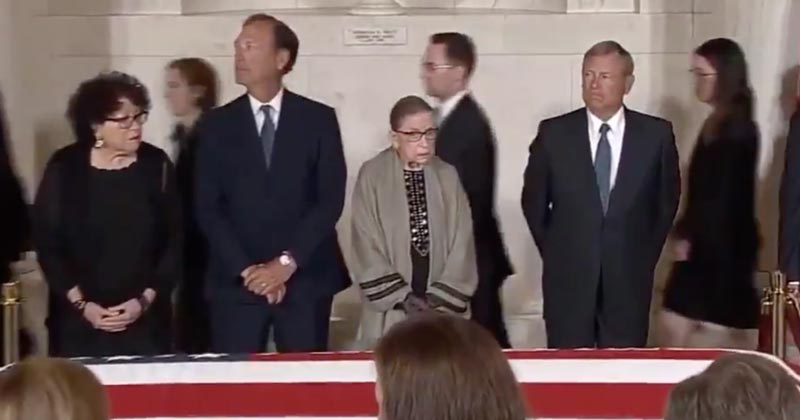 After RBG was MIA for several months due to surgery, the web went wild with rumors the SCOTUS elder could be terminal or worse.

Now, even C-SPAN footage of one of Ginsburg’s rare public appearances is being scrutinized.

Check out the video below:

#JusticeStevensMemorial #DeepFakeVideo #RBGIsDead
The video showing "proof of life" for RBG at Justice Stevens memorial is a deep fake. Three people out walk through two security guards, the velvet robe and in the one foot space between the coffin and the justices. pic.twitter.com/RuJ05BjNgQ

While many are claiming the video showing a rather decrepit Ginsburg near the casket is a deep fake due to people passing in front of Justice John Roberts, the video appears to be authentic and not a re-edit according to our analysis.

Original link you can go to 43min and watch the video — while I agree it's weird justices are upstaged, it is NOT a DEEP FAKE!#Debunked

With deep fakes becoming more realistic and sophisticated by the day, it’s no wonder people are questioning their own eyes, but we predict this is merely one of many deep fake controversies to come.