The Democrats are hiding in shame after Mueller’s testimony before Congress.

Fox News anchor Shannon Bream issued a Tweet explaining how the Democrats were too scared to face the scrutiny after their spectacle backfired on them:

Mueller appeared confused and disheveled while giving his testimony, was unfamiliar with basic facts contained in his own report, and refused to answer simple questions regarding his investigation. Democrat dreams of impeaching Trump based on the contents of the Mueller report may have went up in smoke for good yesterday.

Republicans, including President Trump himself, are celebrating this political victory. They are making the rounds and pointing to Mueller’s testimony as more evidence that the Russian collusion investigation was a witch hunt from the start.

The Democrats lost so BIG today. Their Party is in shambles right now…pic.twitter.com/WDnGSOFzZU 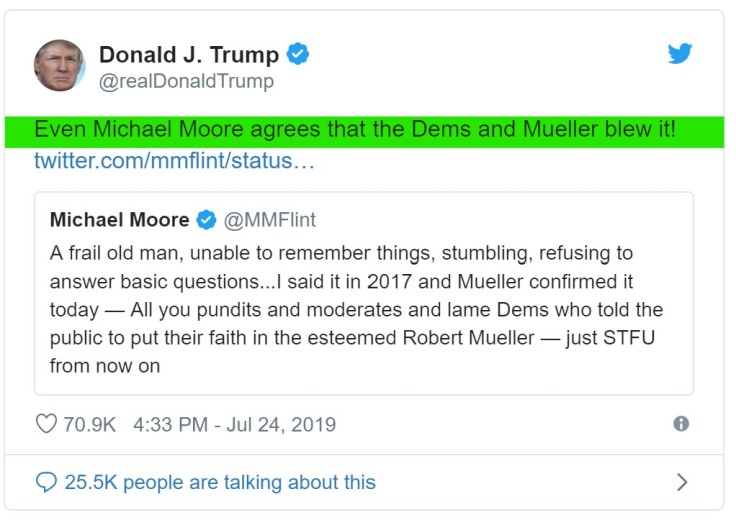 “It was a terrible day if you were a Democrat,” Former Republican South Carolina Rep. Trey Gowdy said while appearing on Fox News yesterday. “I do want to give them credit for this. They managed to have a hearing without calling a convicted felon as a witness. I don’t want us to overlook that.”

The fake news couldn’t even spin this one on behalf of the Democrats:

The Democrats can run from media appearances, but they cannot hide from the upcoming fallout with the voters in 2020. After Mueller was exposed in the public eye, the Democrats’ Russia canard will never carry the same weight with the American people.