Charles Rivkin, former President Barack Obama’s former ambassador to France and a former top State Department official under Obama who was Obama’s 2008 campaign co-chair and has since taken over the MPAA as its chairman, announced on Monday morning to the board of the MPAA that Fabrizio has been terminated as a result of the arrest.

Rivkin took over the MPAA from former Sen. Chris Dodd (D-CT), a longtime top Democrat who ran for president and has deep connections in Washington. When he retired from the Senate in 2011 after 30 years, he took the job at MPAA as its chairman. Rivkin took over for Dodd in 2017, after the former Democrat senator stepped down to join a top D.C. law firm. Variety’s Nate Nickolai and Matt Donnelly wrote:

Steven Fabrizio, a top executive at the Motion Picture Association of America, has been fired following charges of second degree sexual abuse and blackmail. Fabrizio served as general counsel to the trade group, which represents the interests of Hollywood on Capitol Hill. He was charged on Saturday in Washington, D.C. On Monday morning, MPAA Chairman and CEO Charles Rivkin informed his board — which includes all of the major studios and Netflix — that Fabrizio was dismissed ‘for violating certain terms of employment.’ Daniel Robbins has been appointed interim general counsel as a replacement is found, Rivkin added.

Variety’s report follows Breitbart News’ publication of Fabrizio’s arrest, including details from a police report reviewed by Breitbart News detailing how detectives arrested Fabrizio after a relationship he struck up with a woman from an online “dating website” went awry.

As Breitbart News reported late Monday before this new report from Variety, the police allege the woman called for help after what the detectives describe as a series of encounters between the woman and Fabrizio, which she claims she attempted to end multiple times.  The report then describes messages sent by the woman to Fabrizio that “were largely composed and sent in consultation with members of the Metropolitan Police Department.” Detectives then orchestrated Mr. Fabrizio’s arrest outside the woman’s

The MPAA, Fabrizio, and Metropolitan Police Department have still not replied to requests for comment, but now with Variety’s report that Hollywood’s man in Washington has been arrested–a report that confirms Breitbart News’ account of the arrest, and adds he was charged on Saturday in D.C. court and awaits prosecution.

The Variety report quotes more details from the police report on the matter:

According to a police affidavit, Fabrizio is accused of threatening a woman he met on a “sugar daddy” dating site. The police allege that Fabrizio and the woman had consensual sex once on Aug. 19, after which he paid her $400. After that, she did not want to see him again. According to the affidavit, Fabrizio sent numerous texts insisting on a second meeting, and threatening to expose her if she did not comply.

“I know where you live,” he allegedly wrote. “I know where you work. Don’t think — Hospital would be happy to know that it’s young nurses are having sexual for money / Same for your landlord.”

Fabrizio allegedly used those threats to coerce her into having sex again, according to the affidavit. The police allege that he then sent additional texts threatening to tell her parents if she did not continue to have sex with him a couple times a month. The woman called the police. After arranging for another meeting, Fabrizio was arrested outside the woman’s apartment on Friday morning, according to the document.

Variety also includes a background quote from an anonymous MPAA spokesperson who told the outlet of the charges against its own lawyer Fabrizio that “if true, are both shocking and intolerable to the association. We had no prior knowledge of this behavior before these charges were publicly filed.”

Fabrizio’s deep connections in Washington, D.C., especially to top Democrats around town, are only beginning to become clear publicly. He first took the job at the MPAA in 2013 as its in-house chief counsel after serving as its outside counsel for some time.

Trump allies in Washington quickly shared the news that a top leftist Hollywood ally had fallen in D.C.:

Donald Trump, Jr., President Trump’s eldest son, also shared the news, commenting that Hollywood and the leaders of “the Resistance” against his father are “truly sick”: 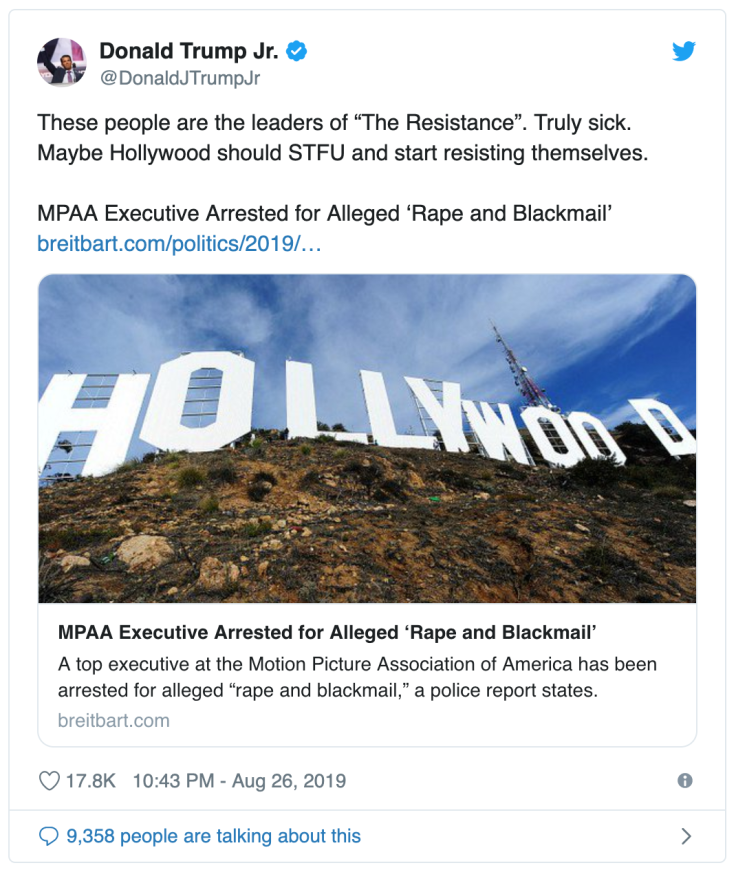 In a Hollywood Reporter story about his hiring, Dodd–the top Democrat former senator who was then running the MPAA–said he thought the world of Fabrizio.

“Steve has been one of the entertainment industry’s most effective advocates for years, and has the perfect blend of knowledge, skill, and experience to lead the MPAA’s already talented legal team,” Dodd said. “As the MPAA’s new Global General Counsel, he will continue to protect the rights of our industry’s creators and makers so they can do what they do best: tell stories that entertain audiences across the globe.”

Fabrizio later, in early 2014, sat for a major interview with the Hollywood Reporter in which he explained his plans for the industry to pursue in Washington, D.C. He laid out various litigation he already been involved in, and major policy fights ahead that Hollywood envisioned.

Fabrizio was very highly-paid, according to IRS 990 forms that the MPAA filed. Politico Influence reported on his salary–which was into seven figures at $1.1 million annually–back in late 2017, according to a report based on 2016 IRS 990 documents from the MPAA.

The organization in 2016, per these documents according to Politico raised $57.8 million and spent $66.7 million. Its highest paid staffers that year were Dodd, who made $3.4 million, and Fabrizio who made $1.1 million. Next up was MPAA’s COO Diane Strahan who made $1 million in 2016.