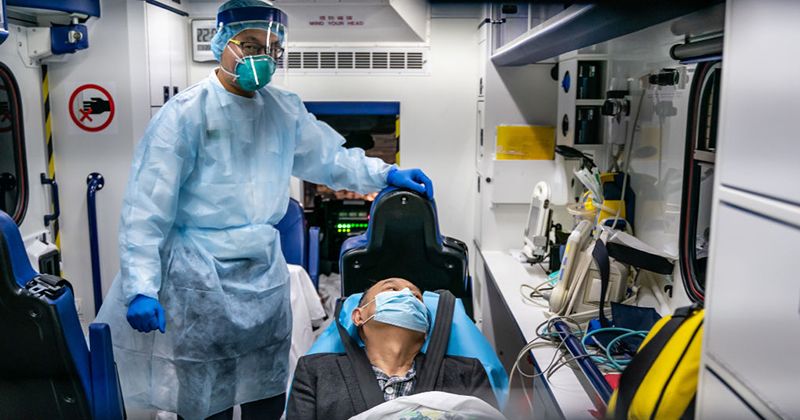 The South China Morning Post reports that a team of researchers at Wuhan’s Jinyintan hospital have retraced the movements of the first individual who was diagnosed with the virus.

They determined that he had no links to a shady seafood market selling live snakes and bats for human consumption.

The development comes despite practically all of the western media reports from the city of Wuhan having claimed that the city’s hospitals have been completely overwhelmed by cases of pneumonia as more cases of the Wuhan coronavirus are confirmed.

Amazingly, SCMP caveated its report by claiming that other patients among the earliest cases had “continuous exposure to the market,” which was shut down on Jan. 1 by Wuhan authorities over fears that its trade in wild animals was linked to the viral outbreak. Authorities have since banned the selling of live animals at markets.

The researchers, seven of whom work at Wuhan’s Jinyintan hospital, designated for patients with the illness, revealed on Friday in The Lancet medical journal that symptoms of the new disease were first reported on December 1 – much earlier than the Wuhan government’s initial announcement on December 31 of 27 cases of the pneumonia-like infection.

According to the report, the first patient had no exposure to the Huanan seafood market which was shut down on January 1 over fears – later confirmed – that the new virus was linked to its trade in wild animals. The researchers added that none of the patient’s family had developed fever or any respiratory symptoms. There was also no epidemiological link between the first patient and the later cases, they found.

The researchers analysed data from 41 patients with confirmed infections who had showed an onset of symptoms up to January 2. Six of those patients died, putting the fatality rate of the group at 15 per cent. The researchers noted that clinical presentations of the patients greatly resembled severe acute respiratory syndrome.

The first patient to die from the new coronavirus had continuous exposure to the market before he was admitted to hospital with a seven-day history of fever, cough and breathing difficulties, according to their report.

Doctors also identified 13 other patients who had no contact with the market, which helps build the case for human to human transmission.

The absence of a link to the seafood market is one of the indicators for human-to-human transmission of the virus and the researchers identified another 13 patients who also had no direct exposure to the market.

“Taken together, evidence so far indicates human transmission for 2019-nCoV,” the report said. “We are concerned that 2019-nCoV could have acquired the ability for efficient human transmission,” the researchers added, along with a strong recommendation for precautions such as fit-tested N95 respirators and other personal protective equipment.

Much to Beijing’s chagrin, a team of Chinese scientists on Friday revealed that symptoms of the virus first emerged as early as Dec. 1, much earlier than the Wuhan government’s initial announcement of the first 27 cases on Dec. 31. The notion that the virus may have been transmitted to humans via consuming bats, rats, badgers or snakes was widely reported in the Western press, even by CNN.

Though the possibility of zoonotic transmission hasn’t been entirely ruled out, these researchers apparently believed that there’s reason to doubt that the fish market was the source of the virus. However, the situation is still very much in flux, and it remains true that some of the other patients did have contact with the market.

Either way, do the researchers findings lend more credence to the other conspiracy theory about the virus’s origin? Wuhan reportedly has two labs that participate in China’s bio-warfare program, as Radio Free Asia first reported, and a handful of US outlets, including the Washington Times, have picked up the story.