NBC’s Savannah Guthrie and Nathan Phillips were both caught misleading Today Show viewers about how he has portrayed his service record Thursday morning.

Phillips is the left-wing American Indian activist who accosted a group of boys from Covington High School, a bunch of 16 year-olds in MAGA hats minding their own business waiting for a bus in front of the Lincoln Memorial. Using Phillips’s proven lies and selectively edited video, the establishment media have now spent six days smearing the boys as racist aggressors.

These lies continue, even after the full video proves they did nothing wrong. For the better part of an hour, the boys were taunted by a group of black nationalists hurling racist and homophobic slurs. The boys reacted with good humor and even sought a dialogue.

Phillips then made his way into the crowd of boys beating a drum. Again, the boys said and did nothing disrespectful. Still, the lies persist — and did so right up until Thursday morning when Savannah Guthrie said something provably false while interviewing Phillips.

“There has also been some question about the nature of your military service and this is a good chance to clear it up,” Guthrie said. “Some have said you were a Vietnam veteran, I don’t believe you have said that, what exactly is the nature of your service?” [emphasis mine]

“I don’t believe you have ever said that.”

Sorry, but there is no way on God’s green earth the mighty powers at NBC are not aware of video from January 3, 2018, where Phillips says exactly what Guthrie claims he never said — to wit: “I’m a Vietnam Vet.”

In fact, as you will see below, Phillips has falsely identified himself as a “Vietnam vet” — on video.

Not only does NBC have the resources to dig the videos up from the original Facebook page, but the videos are currently flying all over the Internet.

Let’s go to the videotape…

More Phillips:
"I got a relation. A sister, or a niece, she gave me that Vietnam colors flag. You know the yellow, red, black one with some tobacco on there. She wanted me to carry it around because you know her dad, a Vietnam vet too like that." pic.twitter.com/aZGuVAiHwx

And last fall, he shared a photo of a medal inscribed with the words “Vietnam War Veteran.” 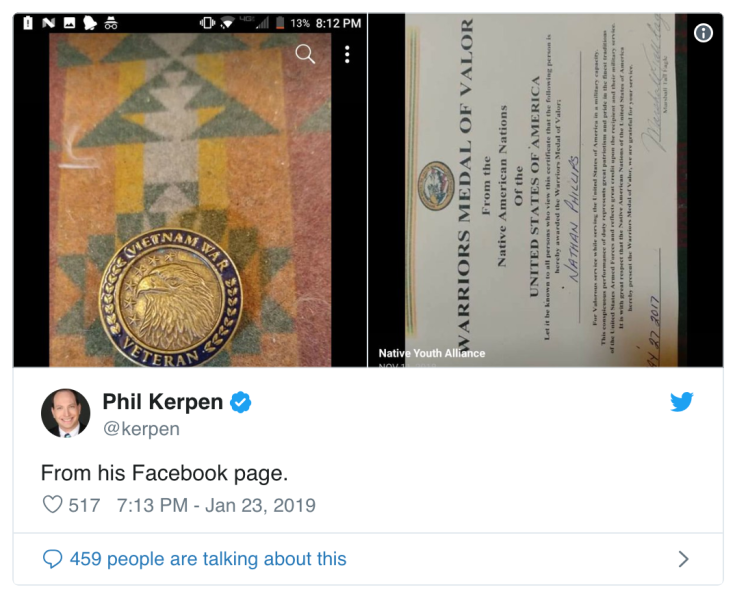 In that video, Phillips appears to forget to use his customary phrasing: “Vietnam-times veteran,” a talking point so slippery that CNN and a Native American reporter — apparently hearing what they wanted to hear — errantly transcribed it as “Vietnam veteran.” In one 2015 interview, Phillips actually mixes up the word order, saying “As a Vietnam veteran times…”

Further, as Breitbart’s Kristina Wong reports, Phillips described himself as a “recon ranger” — a position that does not exist but sounds enough like a combat role. However, a service record document presented by retired Navy SEAL Don Shipley (a perennial investigator of stolen valor claims) indicates he was instead a refrigerator mechanic.

Guthrie: “Some have said you were a Vietnam veteran, I don’t believe you have said that[.]”

So what we have here is yet another example of NBC News deliberately misleading its viewers. This is all about protecting Phillips, all about not confronting him with his lies, which would have destroyed his credibility the moment Guthrie brought it up. After all, you can’t lynch the future of white, Christian boys who support Trump unless you protect the narrative.

“What I’ve always said is that I’ve never stepped foot in South Vietnam,” he told Guthrie with a straight face. “How much clearer can that be?” he added, with butter refusing to melt in his mouth.

Phillips is also still standing by his false claim the boys chanted “Build the wall,” even though countless hours of videotape show no such thing.

This is NBC’s second round of shameless fake news in only two days. On Wednesday, NBC published a story that deliberately made it look as though Covington High School banned an openly gay student from giving a speech. Other than the fact the student did not, you know, attend Covington High School, the story was right on the money.

And all of these lies are coming off of NBC’s Chuck Todd dousing himself in rocket fuel and lighting up a road flare in tribute to BuzzFeed’s fake news fiasco from last week.