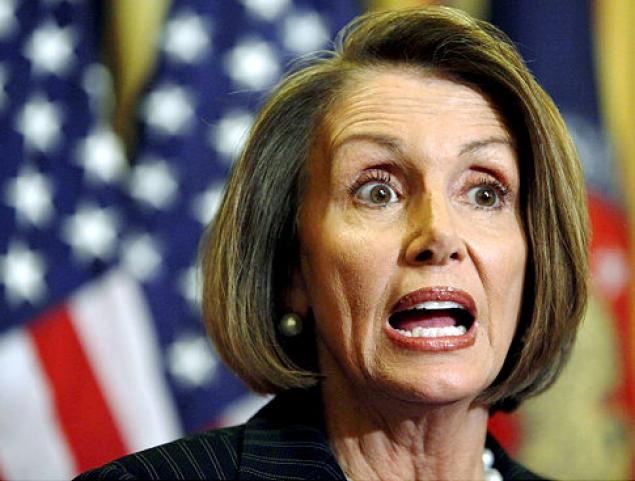 Speaker Nancy Pelosi (D-Calif.) said Thursday that House Democrats are not working behind the scenes to craft a counteroffer to President Trump’s border wall demands as a strategy for ending the history-making partial shutdown.

“That’s not true. That’s not true. That’s not true,” Pelosi said during a press briefing in the Capitol.
Instead, the Speaker asserted that Democrats’ strategic blueprint remains unchanged: The House will continue to pass spending bills already authored and endorsed by Republicans, while insisting that Trump reopen the government as the prerequisite for bringing Democrats to the negotiating table on his border wall.
“We are doing what we have been doing all along: working on our congressional responsibility to write bills, appropriations bills, to keep government open,” she said.
The remarks arrive as Democratic leaders are expected to release their own plan to bolster border security, to include enhanced surveillance technologies and reinforcement of existing physical barriers — but no new wall construction.
House Majority Whip James Clyburn (D-S.C.) said Wednesday that the Democrats are prepared to match Trump’s figure of $5.7 billion for border security — with two stipulations: it can’t be used for new wall construction, and the negotiations must happen after the shutdown has ended.
“Using the figure that the president has put on the table, if his $5.7 billion is about border security then we see ourselves fulfilling that request, only doing what I like to call using a smart wall,” Clyburn told reporters after a Democratic caucus meeting. “These are the types of things that we are going to be putting forward.”
Pelosi on Thursday framed the Democrats’ emerging border security proposal — expected to be released as early as Thursday afternoon — as a standard part of the appropriations process.
“Many of those bills have come to the floor again and again, just this week. The Homeland Security Bill was not finished. Hopefully it will be finished soon, and out of that you will see our commitment to border security,” she said. “That’s not any negotiation behind the scenes, or anything like that.”
Pelosi declined to put a figure on the border security provisions to be included in the Department of Homeland Security bill, being spearheaded by Rep. Bennie Thompson (D-Miss.), who heads the Homeland Security Committee. But she emphasized that it will come in addition to other border-related funding already included in House-passed bills to to fund other agencies with a hand in security, including the Treasury, Justice and State departments.
“Within our $49 billion Homeland Security bill there will be some provisions,” she said.
Pelosi’s remarks highlight the disagreement at the crux of the shutdown standoff: Democrats are insisting the government be reopened as a condition of negotiating on the border wall; Republicans are demanding negotiations on the border wall as a condition of reopening the government.
House Majority Leader Steny Hoyer (D-Md.) said Wednesday that the Democrats “are prepared to spend a very substantial sum of money because we share the view that the borders need to be secure.”
But Hoyer, speaking for most Democrats, said there’s no “crisis” at the southern border, as Trump has insisted, and he amplified the party’s position that the Democrats will start negotiating new border security spending only after the government has been reopened, even if only temporarily.
“The letter is not a negotiation,” Hoyer said. “The letter is going to articulate what we believe is an effective investment to accomplish border security.”
Amid the standoff, Pelosi on Wednesday postponed Trump’s State of the Union address, initially scheduled for Jan. 29, citing the injustice of requiring federal law enforcement officials to secure the Capitol while they aren’t getting paid.
Trump late Wednesday acquiesced to the postponement.
“This is her prerogative,” he tweeted. “I will do the Address when the Shutdown is over.”
Pelosi on Thursday thanked Trump for assent, saying the fight over the speech was an unneeded distraction that’s “so unimportant in the lives of the American people.”
“Thank goodness we’ve put that matter to rest and that we can get on to the subject at hand: open up government, so we can negotiate how best to protect our borders,” she said.