The freshman Senator from Missouri is taking action to protect digital freedom.

Sen. Josh Hawley (R-MO) has emerged as the leading reformer against social media censorship, as he is going after their special immunity privileges under Section 230 of the Communications Decency Act.

As it states right now, Section 230 states that “no provider or user of an interactive computer service shall be treated as the publisher or speaker of any information provided by another information content provider.”

Howley’s bill, the Ending Support for Internet Censorship Act, would remove that exemption for Big Tech firms if they act like publishers instead of neutral platforms. Corporations would have to comply with external audits proving their algorithms and content moderation are not biased.

“With Section 230, tech companies get a sweetheart deal that no other industry enjoys: complete exemption from traditional publisher liability in exchange for providing a forum free of political censorship,” Hawley said in a statement. “Unfortunately, and unsurprisingly, big tech has failed to hold up its end of the bargain.”

“There’s a growing list of evidence that shows big tech companies making editorial decisions to censor viewpoints they disagree with,” Hawley added. “Even worse, the entire process is shrouded in secrecy because these companies refuse to make their protocols public. This legislation simply states that if the tech giants want to keep their government-granted immunity, they must bring transparency and accountability to their editorial processes and prove that they don’t discriminate.”

“Though there are important exceptions for certain criminal and intellectual property-based claims, CDA 230 creates a broad protection that has allowed innovation and free speech online to flourish,” the EFF added on their website.

“This legal and policy framework has allowed for YouTube and Vimeo users to upload their own videos, Amazon and Yelp to offer countless user reviews, craigslist to host classified ads, and Facebook and Twitter to offer social networking to hundreds of millions of Internet users,” they added.

“Eroding the crucial protections that exist under Section 230 creates a scenario where government has the ability to police your speech and determine what you can or cannot say online,” Easley added.

ECommerce trade group NetChoice opposes the legislation because they admit that it would restrict the ability of tech giants to censor.

“This bill prevents social media websites from removing dangerous and hateful content, since that could make them liable for lawsuits over any user’s posting” said Carl Szabo, who works as General Counsel at NetChoice, in a statement. “Sen. Hawley’s bill creates an internet where content from the KKK would display alongside our family photos and cat videos.”

Hawley isn’t phased by the critics, and continues to put Big Tech in his crosshairs. 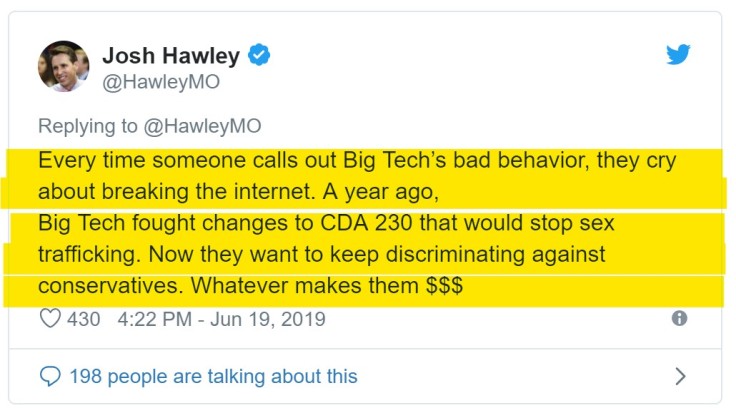 Full text of the legislation can be seen here.