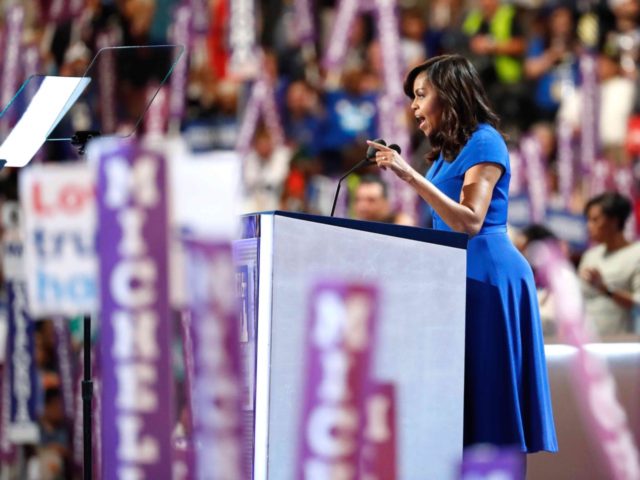 The whispers have been going ’round for a while, but on Wednesday night they burst into the open, after the second debate: Democrats are worried none of their candidates can defeat Donald Trump.

“Is it possible that the Democrats have an overflow of talent but no one who’s precisely right?” wrote Frank Bruni of the New York Times.

Pundits on CNN looked dismayed: all of the frontrunners emerged bruised from the debates, and remain hopelessly left-wing.

Some want former first lady Michelle Obama to joint the presidential race before it is too late. Left-wing filmmaker Michael Moore — who predicted Trump’s victory in 2016 — declared in an extended rant on MSNBC that Michelle Obama is the “one person that would crush Trump.”

The former first lady is very popular, though at times controversial. But Michelle Obama is not the answer to the problem that the Democratic Party has at the moment, which is that it has moved so far to the left that even Barack Obama himself is considered too moderate.

Obama has been taking a beating lately — including from Joe Biden, whom Obama rescued from the political “trash heap,” as Trump is fond of saying (accurately, by the way).

There was always a quiet undercurrent of left-wing impatience with the Obama administration. His supporters knew he shared their radical views, but were frustrated that he often tried to mask them, or to set them aside in deference to the inescapable responsibilities of governing.

Left-wing opposition to Obama was first visible when he — reluctantly– announced the Afghanistan “surge” in 2009 (including a timeline for withdrawal that largely doomed the mission.)

Later, after the Tea Party ushered Republicans back into power in the House of Representatives, the left took matters into their own hands and launched the Occupy Wall Street movement, which Obama backed but did not, in fact, lead.

Everyone “knew” Obama favored gay marriage, religious protestations notwithstanding. But it took Biden blurting out in 2012 that he was “absolutely comfortable” with it to force Obama himself to come out of the proverbial closet.

Obama preferred “leading from behind.” But he unleashed a force Democrats can no longer control. It was Obama, not Trump, who avoided negotiating with Congress, preferring to use his “pen and phone” to impose his will, often against the Constitution.

It was Obama who told his supporters their mission was “fundamentally transforming the United States of America.” Bill Clinton lost the 1994 midterms and moved to the middle. Obama lost in 2010 and 2014 and moved further left.

The left never understood the frustration with Obama had nothing to do with race and everything to do with the fact that his policies favored Wall Street and ignored Main Street. They never learned that many of Obama’s ideas were bad, because the media never held him accountable.

The left took the wrong lesson from his failures: namely, that he lacked the will to follow his ideas through to the end. They want to finish what he started.