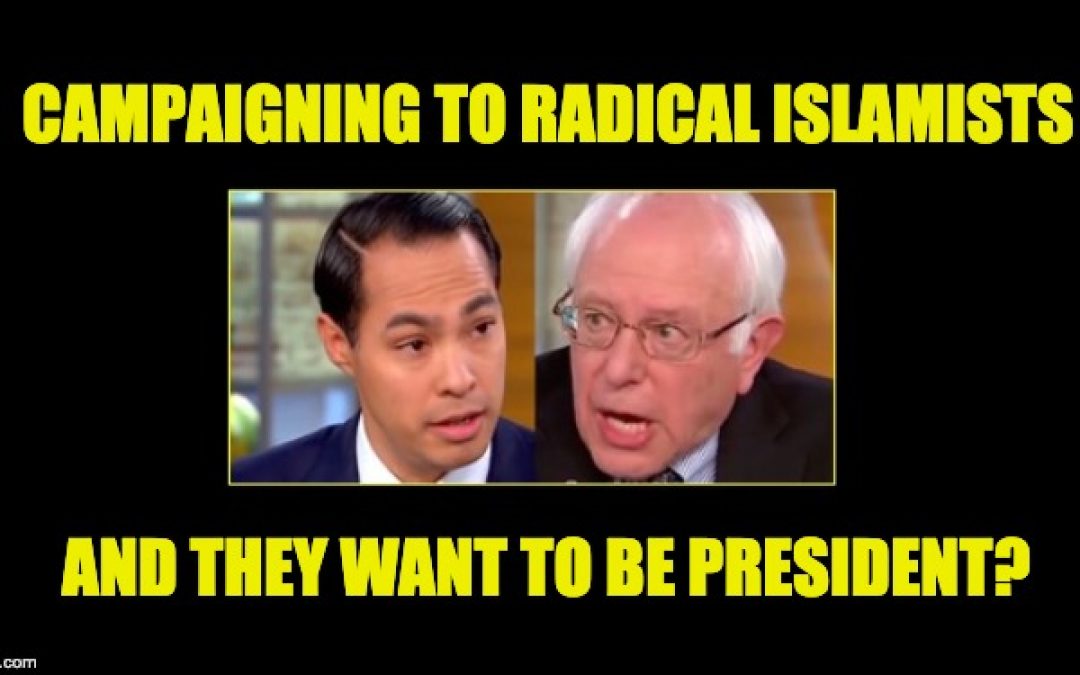 Per the Clarion Project, a pair of Democrats running for their party’s presidential nomination has agreed to speak at the convention of an Islamist group tied to the Muslim Brotherhood. The pair Bernie Sanders and Julian Castro will be participating in a “presidential forum” held by the Islamic Society of North America(ISNA) during its convention in Houston on August 31, 2019.

Sanders and Castro, are apparently unaware of *or don’t care that ISNA has been linked to terrorism by the U.S. Government and that some US-based terrorists have emerged from ISNA.

The U.S. Justice Department lists ISNA as an “entity” of the Muslim Brotherhood, a radical and often violent arm of the Islamist global political project. The Brotherhood’s goal is a worldwide caliphate with all of humanity living under sharia law. Declassified FBI memos indicate that ISNA was identified as a Muslim Brotherhood front as early as 1987. “The entire organization is structured, controlled and funded by followers and supporters of the Islamic Revolution as advocated by the founders” of the Brotherhood in Egypt, said one source. In August 1988, that same source furnished the FBI with a private ISNA document “clearly stat[ing] that ISNA has a political goal to exert influence on political decision making and legislation in North America that is contrary to their certification in their not-for-profit tax returns as filed both with the State of Indiana and with IRS.” And a 1988 U.S. Muslim Brotherhood document bluntly identified ISNA as part of the “apparatus of the Brotherhood.”

In December 2003, U.S. Senators Charles Grassley and Max Baucus of the Senate Committee on Finance listed ISNA as one of 25 American Muslim organizations that “finance terrorism and perpetuate violence.”

During ISNA’s 2006 convention, guest speaker Kamran Memon, an attorney with the group Muslims for a Safe America, tried to rationalize al Qaeda’s terrorist activities as a response to provocative American policies overseas:

At the end of December 2008, the word guilty was read a total of 108 times in a Dallas federal courtroom. A jury convicted the Holy Land Foundation and each of the five defendants of raising money to fund Hamas terrorism. The defendants were guilty of three dozen counts related to the illegal funneling of at least $12 million to the Palestinian terrorist group. Named as unindicted co-conspirators in the trial by the Justice Department were the Council on American–Islamic Relations (CAIR), the Islamic Society of North America (ISNA) and the North American Islamic Trust (NAIT) which is part of ISNA. ]’

Dr. Mark Christian is the President and Executive Director of the Global Faith Institute. A former Islamic Imam who converted from Islam to Christianity, he has dedicated his life and work to the proposition that “the first victims of Islam are the Muslim themselves.”  One of ISNA’s projects is to fund mosques across the US, which on first glance is not a bad thing, but according to Dr, Christian some regular attendees of ISNA mosques have turned out to be terrorists, including:

With these and other examples of ISNA’s terrorist connections, why would Castro and/or Sanders want to come within one hundred miles of this convention?

Understand the objection here is not that they are wrong for speaking and doing outreach toward the American Muslim community. However, two people who want to be president of the United States should not be doing outreach toward or giving gravitas to a terrorist-connected organization. It is almost as if they don’t care.  Sadly they probably don’t.