Is there any phrase more guaranteed to ruin a sweet childhood memory than “a modern re-imagining of…”? Especially when ‘modern’ means ‘sanitized’ and ‘injected with pointless social-justice twaddle.’

Enter the black, transgender fairy godmother. According to Hollywood Reporter, Emmy-award winning actor Billy Porter will play the role in Sony Pictures’ upcoming remake of the 1950 Disney classic, alongside Cuban-American actress Camila Cabello as the titular princess. Billy Porter, for the uninitiated, is a gay man. 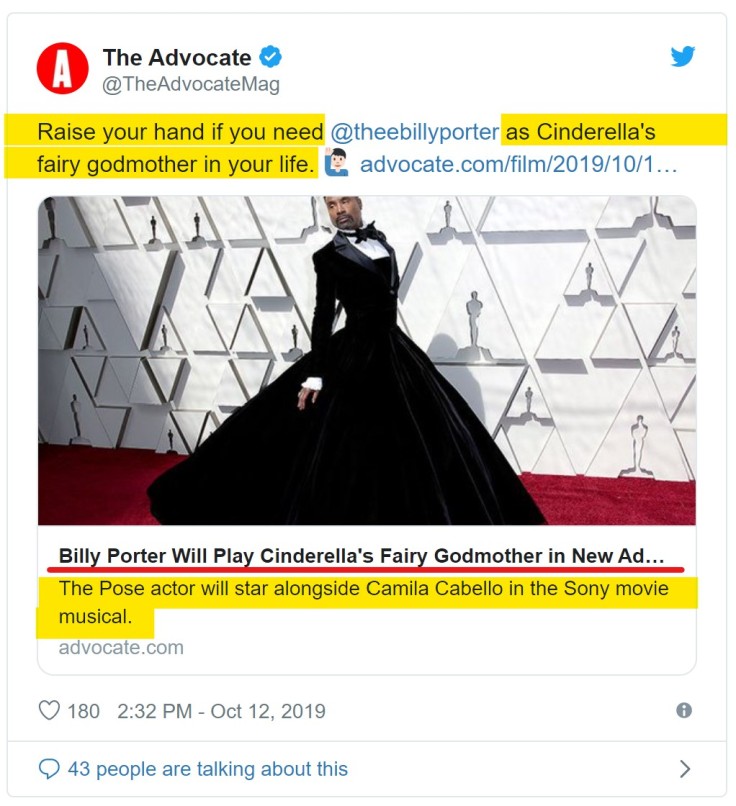 So commonplace is the woke makeover these days that the news was greeted with nothing but syrupy enthusiasm from the media. “Billy Porter Should Absolutely Be Cinderella’s Fairy Godmother,” gushed Vanity Fair, to the deafening squeals of a hundred “Yass Kween”s in the comments section.

“If ‘Fairy Godmother Billy Porter’ doesn’t have an Academy Award for Best Supporting Actor written all over it, we don’t know what does,” sassed gay magazine PinkNews. “It’s safe to say,” chirped women’s magazine site Refinery29, Cinderella “will be nothing short of fabulous.”

To be clear, this author has no attachment to the 1950s Cinderella story. Whether producer James Corden butchers the story or crafts an era-defining fairy tale from it is of no concern to yours truly. But audiences might disagree.

You see, while the ‘woke makeover’ – replacing women with men, injecting transgender roles where there were none, and sprinkling formerly white casts with other colors for diversity’s sake – delights magazine writers and cultural commenters, audiences are sick to the teeth of it.

Ditto for ‘Ocean’s 8,’ the all-female remake of ‘Ocean’s 11,’ which itself was a remake of the 1960s Rat Pack movie. The movie’s cast preemptively deflected negative reviews, with Cate Blanchett claiming men would view it through a “prism of misunderstanding,” and Mindy Kaling declaring that white men simply “don’t understand it.”

Though ‘Ocean’s 8’ fared well at the box office, audience reviewers on RottenTomatoes pelted the flick with a 45 percent rating, compared to the critics’ 69.

When the female-led Captain Marvel hit theaters earlier this year, RottenTomatoes simply changed their ratings system in preparation. Its audience score now reflects the number of people who rated the movie 3.5 stars or higher, which means in all likelihood, the 45 percent awarded to ‘Ocean’s 8’ is actually inflated.

Still, Hollywood hasn’t learned. How about a black, female 007 in the next James Bond flick? Or a female Thor? None of these tickle your fancy? Okay, well how about a live action remake of ‘The Little Mermaid,’ only with a black Ariel? Who says the movie industry is out of ideas!

As for the quality of the movies themselves, who cares! The recent live-action ‘Lion King’ remake was panned, even without any nods to social justice or diversity. Yet by the looks of things, studios won’t stop until every childhood classic has been updated to include a requisite number of disabled transgender multiracial characters more fitting with the times we live in.

Except by then, there’ll be nobody watching them.THE LITTLE