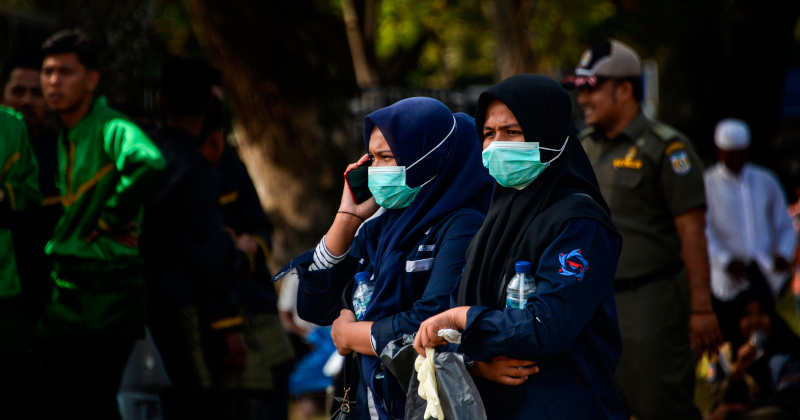 Reports of confirmed cases oddly low in some Asian countries

The number of coronavirus cases reported in Indonesia and Thailand is well below what scientists would expect, given how closely connected the countries are to the Chinese city of Wuhan, the epicenter of the outbreak.

That raises concerns that the virus may be spreading undetected in those countries, potentially adding fuel to the epidemic that has so far killed over 600 people and sickened over 31,000.

“Indonesia has reported zero cases, and you would expect to have seen several already,” said epidemiologist Marc Lipsitch at the Harvard T.H. Chan School of Public Health, co-author of a new study posted on medRxiv.

Thailand has reported 25 cases, “but you would expect more,” he added.

Cambodia has reported just one case, which Lipsitch said is “not very likely,” but “not completely beyond what you would expect.”

The research is based on estimates of the average number of airline passengers flying from Wuhan to other cities around the world. More passengers would presumably mean more cases.

Health systems in Indonesia and Thailand may not be catching cases, Lipsitch said, which could create problems for the rest of the world.

“Undetected cases in any country will potentially seed epidemics in those countries,” he added, which can spread beyond their borders.

Lipsitch’s group’s research is one of three recent studies to say that the virus was likely to reach Indonesia.

None of these studies has gone through the normal scientific process of review by outside experts, however. During this fast-moving outbreak, researchers have been posting findings online and on preprint servers to share what they hope will be helpful information. Experts caution that these publications should be taken with an extra grain of salt.

But researchers contacted by VOA said the findings were plausible and help address some lingering questions.

In China, the number of people infected has been climbing daily. But outside China, the outbreak has barely budged. That has puzzled health experts.

“This [study] does get at, I think, a significant question that a number of us have, which is: Where are these cases?” said virologist Christopher Mores at George Washington University’s Milken Institute School of Public Health, who was not involved with the research.

“It’s either that transmission is demonstrably different outside of the main outbreak zone for some reason that has not yet been described,” Mores said, “or we’re just not capturing it and counting it, and there’s a failure to detect.”

This study suggests the latter, he added.

Indonesia, Thailand and Cambodia are screening travelers from China at the border.

“Indonesia is doing what is possible to be prepared for and defend against the novel coronavirus,” the World Health Organization’s Indonesia representative, Dr. Navaratnasamy Paranietharan, told the Sydney Morning Herald.

However, he added, “there is still more work to do in the areas of surveillance and active case detection.”

These countries are not the only places with shortcomings in their public health systems, said epidemiologist Art Reingold at the University of California-Berkeley’s School of Public Health.

“I wouldn’t want people to think everyone else is doing a great job. We need to beef things up in a lot of places,” he added, and not just in the developing world.

While some countries start to cut connections with China in hopes of keeping out the disease, Mores said, those measures may not help if the virus is spreading under the radar in countries that don’t.

“There’s certainly plenty of places, especially in the developing world, that are not going to be able to shut down their economies because of this coronavirus outbreak,” he said. “And the danger there is that those countries are even more susceptible” because of weaker public health systems.

And that puts the world at risk, Mores added.