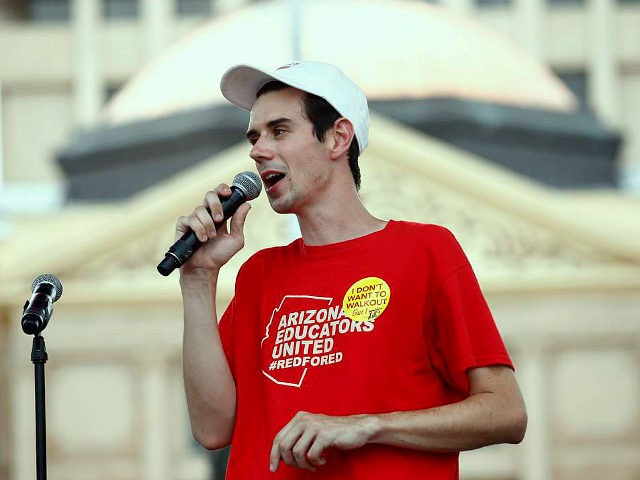 Noah Karvelis — the 24-year old Arizona music teacher who was credited with launching the national #RedforEd movement that spawned teachers’ strikes in Arizona in March 2018 and subsequently in other states around the country — holds just a “provisional” teaching certificate, having failed to complete the required coursework and pass tests on the U.S. Constitution and the Arizona Constitution.

This information about the #RedforEd leader is according to publicly available data on the Online Arizona Certification Information System (OACIS) website of the Arizona Department of Education.

In Arizona, public school teachers are granted “provisional” status for three years, after which they must pass a number of tests and performance reviews to achieve the more permanent “standard” status.

To gain “standard” status, “provisional” teachers must not be on a performance improvement plan and must complete coursework and pass two important tests — one on the U.S. Constitution and another on the Arizona Constitution.

Conservative talk radio host James T. Harris, heard weekday afternoons on Phoenix’s KFYI, first reported in April 2018 on Karvelis’s failure to pass the required constitutional courses, and Karvelis has apparently done nothing to address that deficiency in the intervening year.

One year after Harris reported on Karvelis’s two deficiencies for his provisional PreK-12 music education certificate, those deficiencies remain, as can be seen on the Arizona Department of Education website as follows:

Deficiencies – A certification requirement which must be completed within a specified period of time.

Certification Note: Completion of a course or passing the appropriate examination on the provisions and principles of the Arizona Constitution is required.

Certification Note: Completion of a course or passing the appropriate examination on the provisions and principles of the United States Constitution is required.

Karvelis’s lack of interest in the U.S. Constitution is not surprising. As Breitbart Newsreported, he is part of a new breed of left-wing activists embedded in the ranks of teachers across the country:

The political environment changed after the election of Donald Trump as president in 2016, and teachers union activism became dominated by young, hardcore left-wing political activists, all operating under the general wing of the various teachers unions and, in particular, the National Education Association.

Noah Karvelis — who graduated from the University of Illinois with a teaching degree in 2016, just a few months before Donald Trump was elected — was one of those activists. FEC records indicate he made small donations in 2015 and 2016 to the Bernie Sanders for President campaign, on which he also volunteered.

During his first year teaching, he also had time to pen an article for Progressive Times, which was published in February 2017, titled “From Marx to Trump: Labor’s Role in Revolution.”

“Without the empowerment of the working class and of organized labor, any revolution is destined from the outset for failure. In these early days of the Trump Era, we must continue our fight and bolster the working class as we strive towards a progressive political revolution. By doing so, we will move our revolution ever closer to imminent success,” Karvelis wrote in that article.

Evidence continues to mount that the so-called “organic” launch of the #RedforEd movement in Arizona last March by “rank and file” teachers was, in fact, a highly orchestrated political campaign masterminded by Joe Thomas, head of the Arizona Education Association teachers union.

Karvelis launched the #RedforEd campaign on social media in March 2018, just a few months after he was appointed as the head of the Littleton (Arizona) Elementary School District teachers union by state boss Joe Thomas, sources tell Breitbart News. Karvelis was elevated to lead the local teachers union over about 150 other members of the local union — almost all of whom had more teaching experience — despite only having a “provisional” status as a teacher in the state.

While employed as a music teacher at Tres Rios Service Academy in the Littleton Elementary School District, sources tell Breitbart News Karvelis was often excused from his teaching duties to attend to union business.

As Breitbart News reported in February, #RedforEd is “[a] well-funded and subversive leftist movement of teachers in the United States [that] threatens to tilt the political balance nationwide in the direction of Democrats across the country as Republicans barely hang on in key states that they need to hold for President Donald Trump to win re-election and for Republicans to have a shot at retaking the House and holding onto their Senate majority.”

Karvelis will not apparently be required to move up from “provisional” status to “standard” status because he is moving on from teaching in Arizona public schools. Sources tell Breitbart News he is entering a Ph.D. program the University of Wisconsin-Madison in the fall, a fact he confirmed in this tweet he sent out last month:

Karvelis, the young far-left political activist embedded in Arizona to launch the #RedforEd movement, will be right at home with the far left faculty at the University of Wisconsin-Madison’s School of Education and, more specifically, within the Curriculum and Instruction department.

Among the faculty members who teach in the University of Wisconsin-Madison Curriculum and Instruction Ph.D. program is Professor Julia Eklund Koza.

According to her bio, “Professor Koza teaches in the areas of music education and multicultural education, and she was Chair of the Music Education Area from 1998-2014.”

She is the founder of the Consortium for Research on Equity in Music Education (CRÈME), an international, cross-institutional initiative that fosters equity research in music education, and she twice served as the faculty chair of UW-Madison’s Committee on Women in the University. Her widely published research focuses on equity issues in education, music, and music education, as well as on corporate influence on music education policy.

In 2008, she wrote an article for Philosophy of Music Education Review titled, “Listening for Whiteness: Hearing Racial Politics in Undergraduate School Music.”

Professor Diana Hess, Dean of UW-Madison’s School of Education, has a Ph.D. in Curriculum and Instruction in Social Studies, Educational Policy and Law.

She is the co-author, along with Paula McAvoy, of The Political Classroom: Evidence and Ethics in Democratic Education, which “won the American Educational Research Association’s Outstanding Book Award in 2016.”

According to the book’s website, “In their new book, The Political Classroom: Evidence and Ethics in Democratic Education, Diana E. Hess and Paula McAvoy argue that schools are, and ought to be, political sites — places that engage students in deliberations about questions that ask, ‘How should we live together’”