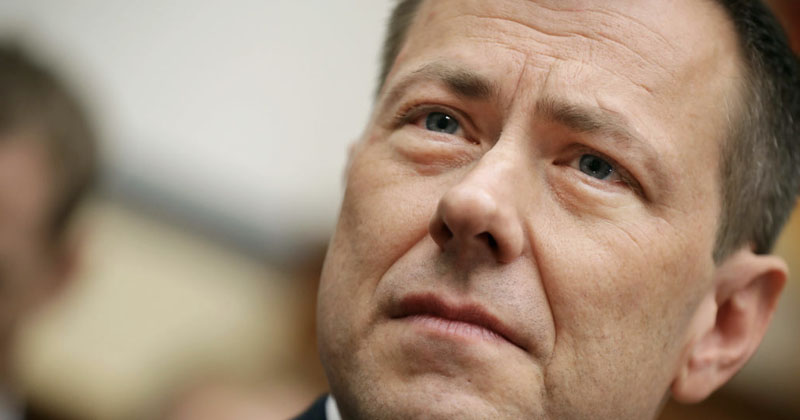 ‘Strzok is in the (HQ) building all the time,’ says FBI insider

Disgraced ex-FBI special agent Peter Strzok is reportedly back in the FBI’s good graces, and has been seen regularly taking part in meetings at the FBI headquarters, according to insiders.

“Strzok is in the (HQ) building all the time,” one FBI insider told True Pundit on Monday. “He is taking meetings or part of meetings.”

Strzok, who said he’d “stop” Trump from getting elected during the FBI’s phony Russia investigation, reportedly has not been stripped of his security clearance after getting fired in 2018 for his anti-Trump text messages.

“He (Strzok) is getting in with a visitor’s badge and is involved in meetings,” one FBI insider said. “Maybe they are all trying to get their story straight before things go public.”

The insider is likely referring to the much-anticipated declassification of the FISA warrants used to spy on the Trump campaign and associates in 2016 ahead of the presidential election.

Coincidentally, Strzok is also suing the FBI and Department of Justice for “unlawfully terminating” him, demanding he be “reinstated” to his post at the bureau and awarded back pay.

“It’s indisputable that his termination was a result of Trump’s unrelenting retaliatory campaign of false information, attacks and direct appeals to top officials,” Aitan Goelman, Strzok’s lawyer, said in a statement on Tuesday.

“Today, Pete Strzok is fighting back, and sending a message that the Administration’s purposeful disregard for constitutional rights must not be tolerated.”

Additionally, Strzok even claimed his discussions with paramour Lisa Page to overturn the election of a duly-elected president constituted “protected political speech” and should not have been made public.

“Strzok asserted in the suit that his sentiments were ‘protected political speech,’ and that his termination violated the First Amendment,” the Washington Post reported.