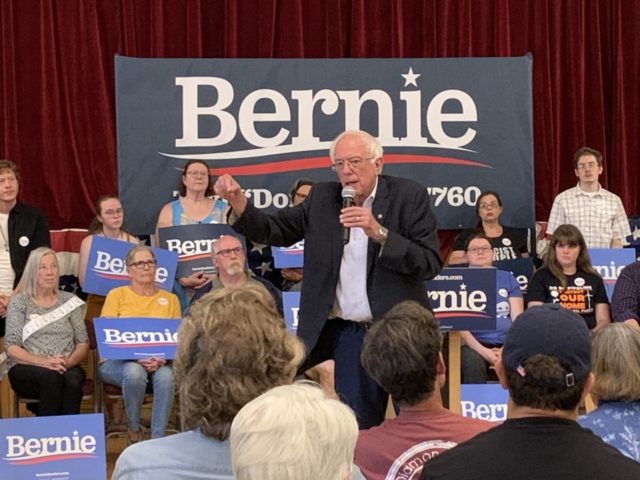 LITTLETON, New Hampshire — Sen. Bernie Sanders (I-VT) rounded out his two-day swing through New Hampshire at an ice cream social on Tuesday afternoon, telling a packed crowd at the Littleton Opera House that Donald Trump is “the most dangerous president” in American history.

Sanders’s pitch to the audience of 327 people — some of whom had traveled from Vermont and Massachusetts to see him — was that his campaign is best placed to defeat Trump nationwide.

A new poll Tuesday showed Sanders leading in New Hampshire, where he defeated Hillary Clinton in 2016. During that campaign, Sanders told voters that he had a better chance of defeating Trump than Clinton. Nearly four years later, many of his supporters feel that prediction has been vindicated.

Sanders touted Medicare for All, as well as proposals for gun control. He called for expanding background checks, banning “assault weapons,” ending the “gun show loophole” that allows people to purchase guns at gun shows without background checks, and for shutting down what he called the “straw man provision” — which he claimed would allow someone to “walk into a gun store, buy a dozen guns, and sell those guns to criminal elements.”

(In fact, according to the pro-gun control Giffords Law Center to Prevent Gun Violence, straw purchases are already illegal under federal law: “Federal law prohibits straw purchases by criminalizing the making of false statements to an FFL [federal firearms-licensed dealer] about a material fact on ATF Form 4473, or presenting false identification in connection with the firearm purchase.”)

Sanders also told the audience that “Medicare for All” enjoyed majority support — which is true, though polls also show “Democrats and Democratic-leaning independents” prefer a policy that builds on Obamacare, rather than replacing it with a single-payer system, according to the Kaiser Family Foundation.

Sanders concluded by telling the audience that he was fighting the “corporate power elite in America whose greed and corruption has destroyed the middle class of the country.”

“I cannot take them on alone,” he added, urging them to join his effort to win the presidency. “That’s what this campaign is about … I am asking your help, the day after we are inaugurated, to work with me to stand up to the corporate elite and tell them that this country does not belong to a handful of billionaires. It belongs to all of us.”

During the question-and-answer session, answering a query about the Department of Veterans Affairs from a young veteran with a large blond Afro, Sanders quipped: “That’s what my hair looked like a few years ago.”

Edith Labonte, who drove to the event from Cabot, Vermont, told Breitbart News that she is confident Sanders will win the state.

“He’s gonna win. He has to,” she said. “He’s for the people. There’s no other president that has been directly for the people like he has … I love Bernie.”