A politics editor at the New York Times faces charges of anti-Semitism and bigotry after a series of old insensitive tweets surfaced online. This comes after a similar scandal with its Washington editor and leaked editorial tapes.

Breitbart News uncovered the tweets in an investigation published on Thursday, detailing a litany of offensive and racially-charged remarks from senior staff editor Tom Wright-Piersanti, who has worked at the Gray Lady for a little over five years, according to his LinkedIn profile.

Before that, on New Year’s day in 2010, Wright-Piersanti said: “I was going to say ‘Crappy Jew Year,’ but one of my resolutions is to be less anti-Semitic. So… HAPPY Jew Year. You Jews.”

In another missive dated December 2009, the future Times editor posted a photo of a vehicle with what appears to be a menorah – associated with the religious holiday of Hanukkah – on its roof, and asked “Who called the Jew police?”

Though the “Jew police” tweet was still publicly viewable when Breitbart’s story first ran, it has also since mysteriously vanished from Wright-Piersanti’s Twitter page. 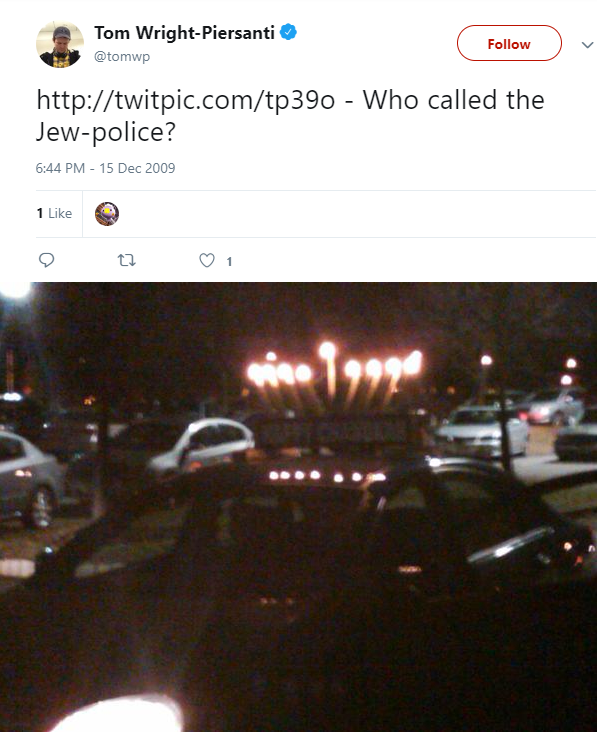 The apparently anti-Semitic comments prompted the Zionist Organization of America (ZOA), one of the oldest Jewish political advocacy groups in the US, to demand for the editor’s swift termination, and a review of past stories he edited.

“The Zionist Organization of America urges the New York Times to immediately dismiss this individual and to undertake a review of all of the stories that he has edited for possible antisemitic bias,” a spokesperson for ZOA told Breitbart News.

In addition to members of the Jewish faith, Wright-Piersanti’s tweets often fixated on “Indians” as well, though it’s not always clear if he is referring to Native AmericRAans or people from India.

“There are four indian guys with mohawks in this one class, and each one is a douche in his own awful way,” he tweeted in December 2009.

A number of other posts singled out Indians for ridicule or insult as well, all of which remain public on Wright-Piersanti’s page at the time of publication.

In another deleted tweet, the Times editor mused “With asian babies, is it racist to say to the parents, ‘Aw, he looks just like you!’? What if you say it before you see any pictures?”

While the Times has not yet addressed the allegations publicly, Wright-Piersanti tweeted an apology on Thursday morning, after scrubbing a number of the offending tweets from his page, which he briefly set to private.

I have deleted tweets from a decade ago that are offensive. I am deeply sorry.

Following the publication of Brietbart’s investigation, Donald Trump Jr., the president’s son, weighed in on the story, tweeting “Disgusting. But we shouldn’t expect any better from the New York Times. This is who they are.”

Earlier this month, the Times demoted its deputy Washington editor for “serious lapses in judgement” in the form of tweets criticized as ‘racist.’

Last week, a transcript of an internal town hall meeting surfaced, showing that the newspaper deliberately decided to shift its coverage of President Donald Trump from his supposed connections to Russia to “race and other divisions.”