Russia will isolate, quarantine, and deport foreigners struck down with the new Chinese coronavirus. The step was announced on Monday by Prime Minister Mikhail Mishustin.

The country reported its first cases on Friday, raising fears that the epidemic affecting neighboring China could prompt a similar health emergency in Russia. However, Mishustin says the situation is currently contained, and there’s no need for alarm.

“In order to prevent the spread of infection in our country, all necessary measures have been taken, the operational headquarters is working and, the situation is under control,” he told his deputies at a meeting in Moscow. The threat has also led to the postponement of the Russian Investment Forum, an annual event hosted in the southern city of Sochi, which attracts thousands of visitors from around the country.

Mishustin explained that a national plan has been implemented to thwart the circulation of the virus, and that it has also been added to the list of highly dangerous diseases. The Wuhan Coronavirus is the 16th addition to the table which includes maladies such as HIV, malaria, cholera, and the plague. According to the Prime Minister, the measure “will allow the deportation of foreign citizens if they have such a disease and introduce special restrictive measures, including isolation and quarantine.”

The movement of Chinese visitors across the Russian border is already limited. Mishustin noted that traffic on the frontier with Mongolia has been suspended, and a temporary ban has been imposed on issuing group tourist and work visas to Chinese citizens. From Monday, the passenger railway service between Russia and China has also been suspended.

The Prime Minister further made it clear that Russia is fully equipped with the necessary medicine to combat the coronavirus, stressing: “It is important … that the prices in pharmacies remain at the same level. The Federal Antimonopoly Service and Roszdravnadzor have been instructed to monitor this.” Some areas of the country have already reported increases in the cost of masks, with local media in Kursk speaking of a 3,500% price hike. 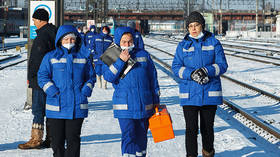 Vice-Premier Tatyana Galikova wanted to completely call off the Sochi event, saying “given the situation and the information that comes from China, I would like to ask you and all those present to make a decision to cancel the forum.” But Mishustin instead suggested just to postpone it and proposed discussing possible dates with the organizers and key participants.

As of February 3, the Wuhan coronavirus has been diagnosed in more than 17,000 people and has killed at least 361, with the vast majority of incidents in China. There are currently two confirmed cases in Russia, in Western Siberia’s Tyumen and the Far Eastern Zabaikalsky region. Both sufferers are Chinese citizens.