UPI reported earlier that everal patients in China who were discharged from hospitals after making a full recovery have been reinfected, citing reports in the People’s Daily on Friday.

One patient in Chengdu was discharged from a local hospital and was quarantined for 14 days at home, but somehow became reinfected. And doctors quoted in the story said her case isn’t unique.

It’s also possible to catch the flu twice in one season, but that is rare.

Update (1100ET): Epoch Times’ Jennifer Zeng is reporting that in parts of China, the government has signaled to workers that they will be “punished” if they don’t report back to work.

And for everyone who gets infected, don’t expect your employer to deal with it, Zeng adds. “if you get infected, it is not a work-related injury. You are on your own.”

#COVID2019 inspection officially ends. Employees who refuse to go back to work will be punished. In the meantime, gov. says if you get infected, it is not a work-related injury. You are on your own. #GDP is more important than human life in #China. #Coronavirus pic.twitter.com/vMLVobbx3S

That’s pretty chilling stuff, but as we pointed out yesterday, there’s an ongoing debate in parts of the country where case numbers aren’t as high (not that anybody trusts the government’s figures) about whether keeping the economy on lockdown might be doing more harm then good. And in order to prevent a repeat of what happened last time (when millions just simply didn’t show up), it’s upping the ante for citizens who don’t abide by the state’s command.

The New York Times is reporting that, for the first time since the outbreak began, Chinese health officials acknowledged on Friday that their constant changes to the ‘criteria’ for what constitutes a ‘confirmed case’ have sown confusion and mistrust.

As we have assiduously reported, officials in Hubei have revised their case tallies three times now because of these shifting definitions.

in the province hardest hit by the coronavirus acknowledged for the first time on Friday that their methods of confirming and reporting infection numbers had sown confusion and mistrust. They added that they would no longer subtract cases from the total. The message comes just hours after state media reported new breakouts in a handful of Chinese prisons. 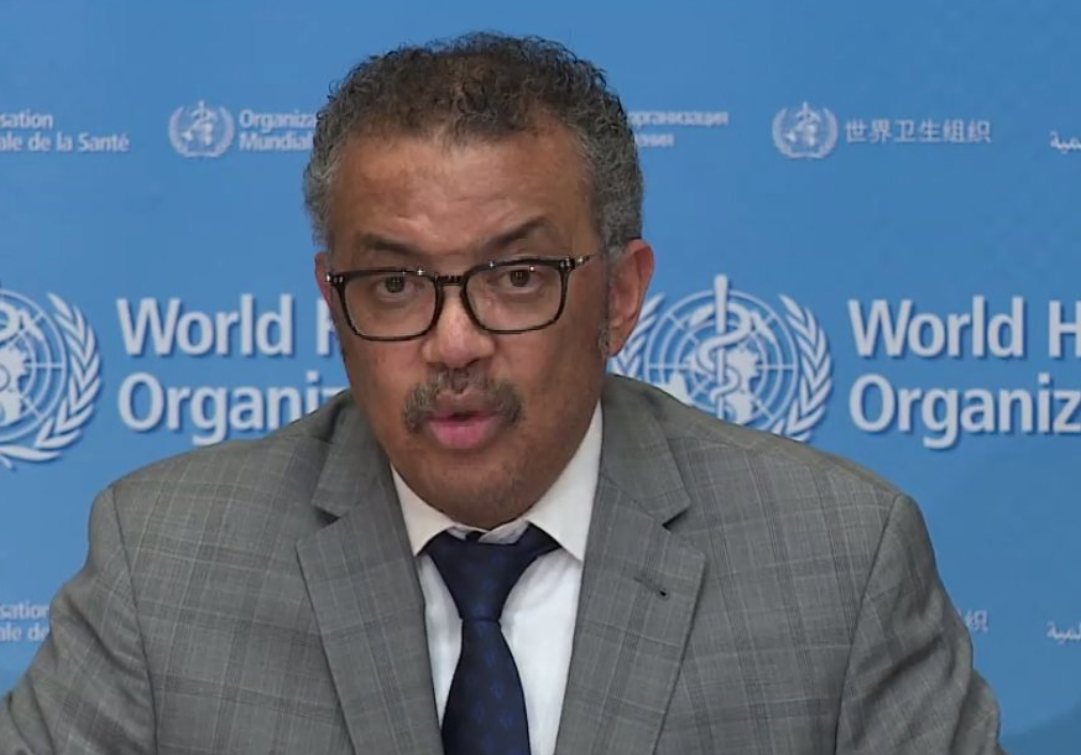 Moving over to the WHO’s daily press conference from Switzerland, Director-General Dr. Tedros commented on the new cases and deaths reported in Iran, as well as Lebanon, which reported its first case this morning though hasn’t yet recorded a death.

Dr. Tedros said the new wave of outbreaks suggests that the world is at a “tipping point.”

“The window of opportunity is narrowing,” Dr. Tedros said, and humanity is running out of time to stop this virus before things get much, much worse.

You know, just some reassuring words to kick off the weekend with a little levity.

We’re starting to suspect that Dr. Tedros may have recently purchased some out-of-the-money S&P puts.

Seemingly responding to the growing number of ‘armchair cranks’ and ‘conspiracy theorists’ questioning why a WHO team of experts – a team that includes two Americans – hasn’t yet traveled to Wuhan, Dr. Tedros added that the team is planning to travel to the epicenter of the outbreak on Saturday.

So far, the team has traveled to Beijing, Sichuan and Guangdong provinces.

The NYT has published an interesting interactive illustrating the huge drop in flights departing from China to the US and other major economies.

The disappearance of tens of thousands of flights leaving China shows “how the coronavirus has hobbled a nation,” the NYT said. 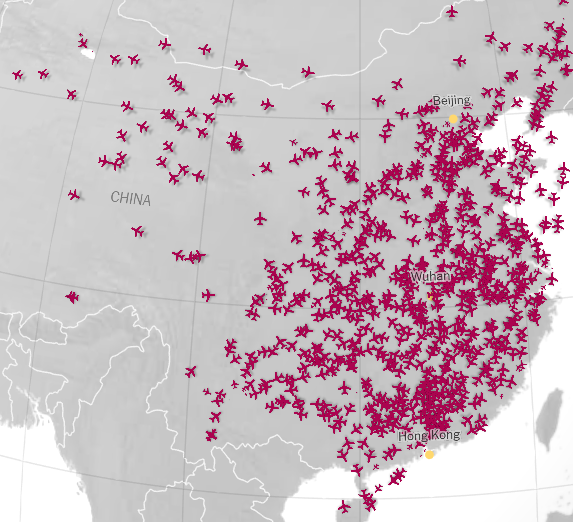 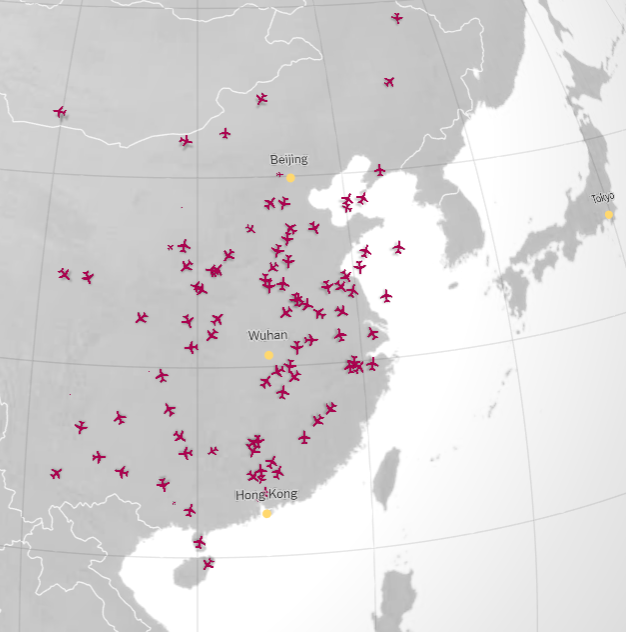 As the NYT reports, Oxford Economics said in a recent report that the outbreak could wipe $1.1 trillion from global output, which kind of undercuts Larry Kudlow’s stammering on CNBC about this not being a ‘US story’: It’s difficult to imagine a scenario where the US economy would walk away unaffected by this.

In other news, Beijing continues to push the ‘everything’s fine; we’re winning’ narrative.

Update (0725ET): Lebanon has confirmed its first case of COVID-9.

The tiny Levantine state, which has swollen with refugees from nearby Syria in recent years, is in the middle of an economic crisis, and its government is presently weighing whether to default on an upcoming loan payment, which could lead to deeply unpopular austerity measures, as Al Jazeera reports.

Earlier, Israel’s Health Ministry confirmed that an Israeli citizen contracted the virus while aboard the Diamond Princess cruise ship (1 of 11 Israeli passengers). She is currently under supervision and isolation in Israel. All 11 were flown out of Japan and sent directly Friday into isolation at Sheba Tel Hashomer Hospital, where they will remain during a 2-week quarantine period. Earlier this week, Israel’s government announced a temporary travel ban on all foreign nationals who had traveled to Thailand, Singapore, Hong Kong and Macao during the past 2 weeks.

Following reports yesterday that two Beijing hospitals had been put under quarantine amid fears of a wider outbreak, WaPo reported that one district in Beijing has been found to have an “infection density” second only to Wuhan on mainland China. This has served to further intensify concerns about what might happen when millions of Chinese return to work next week.

When historians look back at the COVID-19 outbreak, they’ll remember this week as an important turning point in the crisis, when international public-health experts and investors started to focus their attention on South Korea, Japan and other countries in the region that have seen the number of new cases accelerate markedly in recent days.

Put another way, evidence that the virus is spreading more rapidly within other Asian countries outside mainland China has become impossible to ignore, which is probably why US futures are pointing to a lower open for a second straight day.

As Bloomberg reminds us, South Korea has seen its total cases soar past 200 as the number of infections doubled in 24 hours. 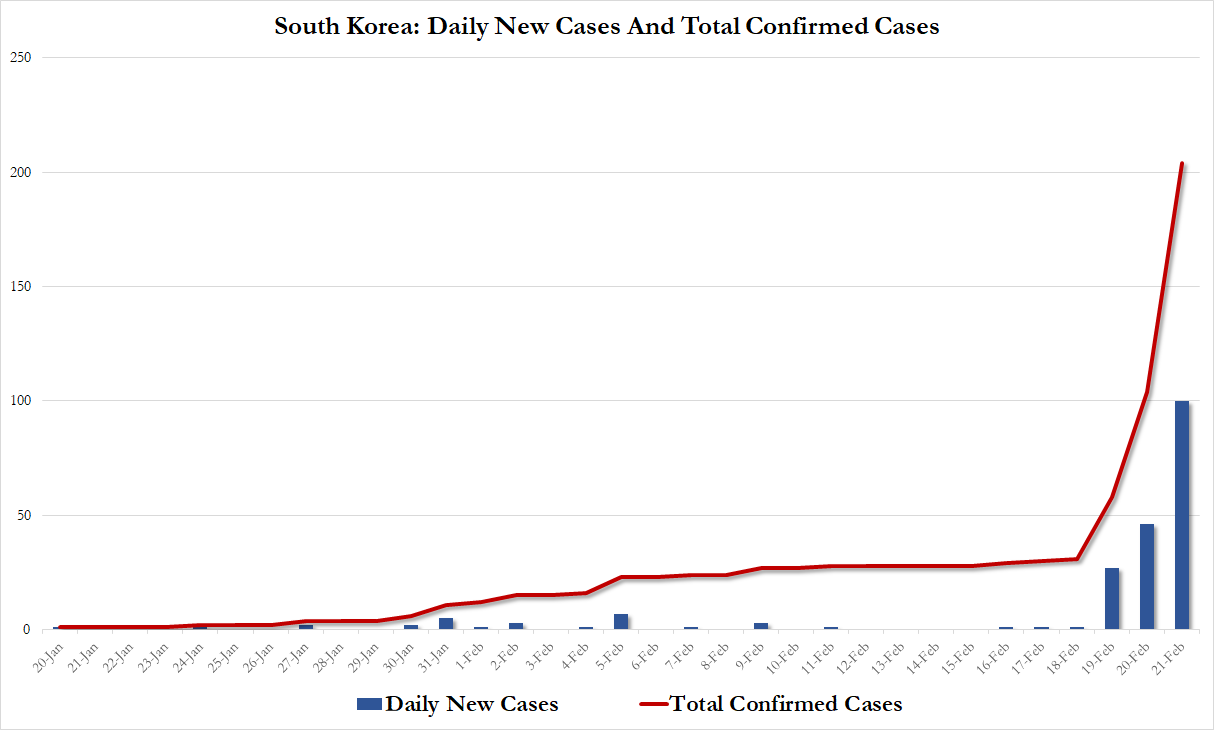 Meanwhile, cases in Singapore and Japan have topped 85, and let’s not forget the 600+ from the ‘Diamond Princess’ who have been excluded from the ‘Japan’ total. 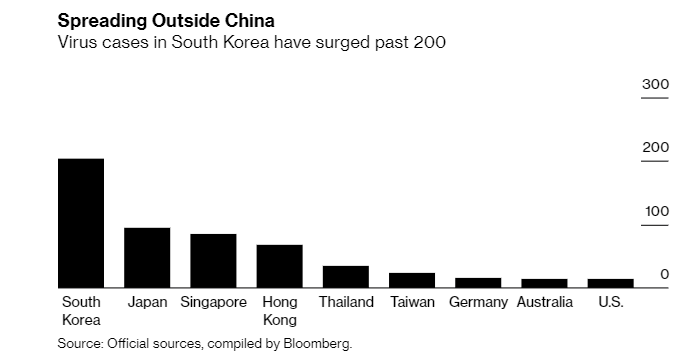 At least as far as deaths are concerned, the numbers outside of China remain small: out of 2,247 deaths, only 13 have occurred in other regions (this includes 2 more deaths in Iran announced just minutes ago).

But there’s no getting around it: the spread of the virus will undoubtedly worsen the economic blowback, as one economist explained to BBG.

“This points to a new phase in the outbreak, and one which will see continued disruption and more economic impact than previously thought.”

Last night, we reported on the latest case numbers out of South Korea, and more have already been recorded. The current total is 204. Earlier this month, the WHO said China’s approach to tackling the virus should be a “model” for other governments facing similar outbreaks. At the time, experts criticized the organization for appearing to parrot Chinese propaganda. But it looks like they might have been on to something. Because as we reported late last night, the Blue House has ordered a ‘special management zones’ in the cities of Daegu and Cheongdo, or what appears to be a kind of ‘soft’ quarantine. The government said that since they’ve failed to prevent an outbreak, they’re pivoting decidedly to a strategy of containment. 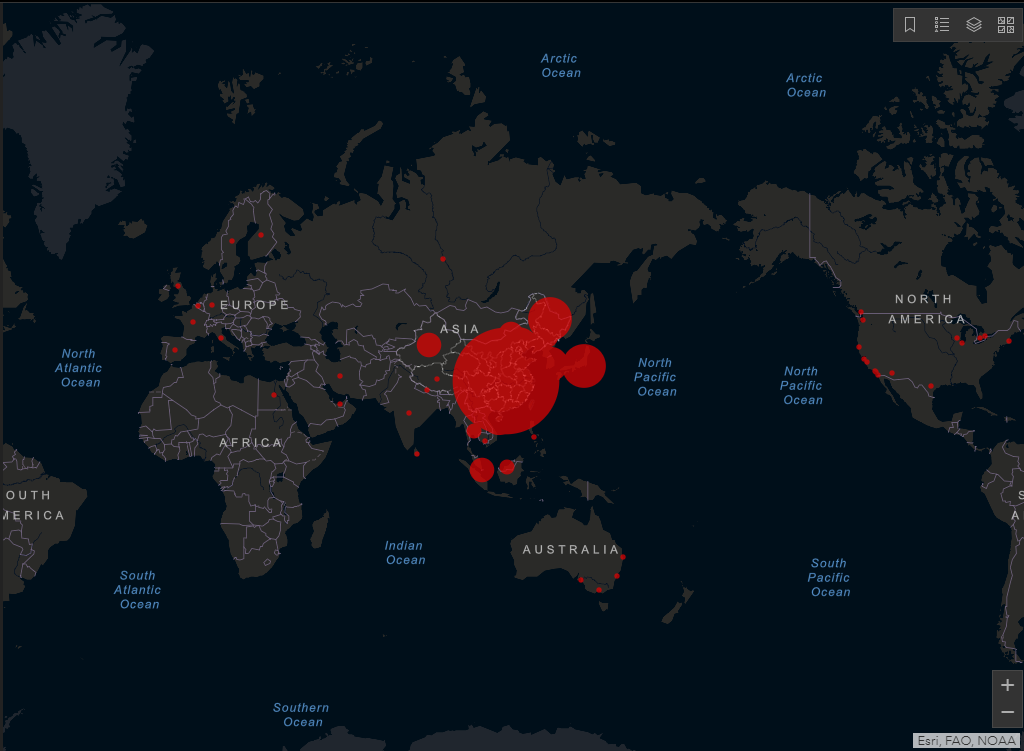 Just a few hours ago, Chinese state media reported that 500 cases – roughly half of the new cases reported in China on Friday – involved prisoners at a handful of jails across the country, according to the Washington Post.

Infections have been confirmed at five prisons in Shandong, Hubei and Zhejiang, according to China’s Ministry of Justice. A prison in eastern Shandong province showed 207 out of 2,077 inmates and staff were infected, and the provincial justice department’s Communist Party secretary was dismissed as a result, the province announced. Another jail in Zhejiang province found 34 cases. Hubei province, at the center of the outbreak, said Friday it found 220 new cases inside penitentiaries.

According to the Washington Post, the prison outbreaks underscore the virus’s easy transmissibility in confined spaces.

…Even as local officials adopt ever-more bizarre and draconian restrictions on individual movement.

Tests at a prison in eastern Shandong province showed 207 out of 2,077 inmates and staff were infected, and the provincial justice department’s Communist Party secretary was dismissed as a result, the province announced. Another jail in Zhejiang province found 34 cases. Hubei province, at the center of the outbreak, said Friday it found 220 new cases inside penitentiaries.

While overall numbers remain low, thousands who fear they may have come into contact with a ‘super-spreader’ in Daegu, a city of 2.5 million about 2 hours south of Seoul. The woman, who believed she was suffering from a simple cold because she had not traveled abroad, reportedly attended four church services at a “cult-like” church with 1,100 members in the city, as well as branches in other cities, including Seoul, where the mayor has ordered the local church closed until further notice.

Communist Party leaders made yet another public misstep overnight when health officials said they would once again change their ‘criteria’ for what constitutes a ‘confirmed’ case of COVID-19 back to the more inclusive and accurate definition. Officials said they decided on the switch because they couldn’t subtract already confirmed cases from the total, which sounds…almost plausible.

On CNBC Friday morning, Eunice Yoon, the network’s reporter on the ground in Beijing, interviewed the owner of a Beijing restaurant discussing his fears about going out of business. But as China slouches back to work, millions are worried that Beijing might sacrifice the public welfare to get a few factories up and running.

Looks like the cat’s out of the bag: North Korea has cancelled the Pyongyang Marathon, the country’s largest tourism money-maker, because of COVID-19, according to the operators of several tour companies who spoke with AFP. 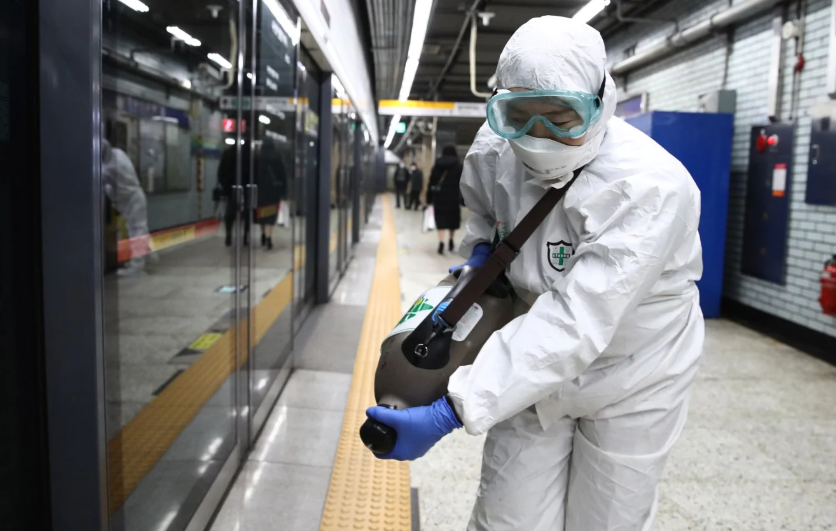 Beijing-based Koryo Tours, the official partner of the marathon, said on its website it had “received official confirmation today that the Pyongyang Marathon 2020 is cancelled”.

“This is due to the ongoing closure of the North Korean border and COVID-19 virus situation in China and the greater region,” it added.

North Korean officials have vehemently denied reports that the virus had crossed the Yalu River, evening becoming enraged at the US in response to an offer of assistance from the State Department. Recently, a WHO official said there are “no indications” that the virus has arrived in North Korea, but considering that we’re talking about North Korea, that’s hardly surprising.

As the lockdowns in Beijing, Tianjin and other cities intensified over the last week, more Chinese were subjected to displays like this:

– It‘s just a flu. Everybody shut the door now. pic.twitter.com/3Gye4P4STR

On Friday, Japanese health officials and Carnival Japan will release the last batch of passengers and crew from their 14-day quarantine aboard the ‘Diamond Princess’ despite criticisms from the CDC that Japanese officials had failed to maintain the quarantine. Right now, infectious disease experts see Japan as one of the riskiest places outside China, according to BBG. Health Minister Katsunobu Kato said on Sunday that Japan had lost track of the route of some of the infection cases, which have tripled in the past week to more than 90.

Iran just confirmed 13 more cases and 2 new deaths, mostly in Qoms, the same city where some earlier cases had been detected, while also reporting that the virus has reached Tehran, according to Reuters. So far, seven Iranians have been diagnosed in Qom, four in Tehran and two in Gilan, according to a tweet from the Iranian health ministry. Iranian officials have acknowledged the possibility that the virus might have arrived in every major Iranian city. 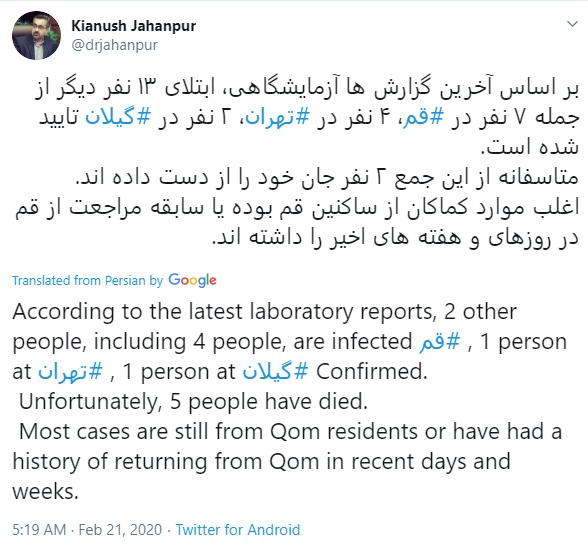 Even in Korea, health officials say they their investigators can’t figure out how some of the outbreaks started. That’s not exactly reassuring.

Right now, the focus is on South Korea. Last week, it briefly shifted to the UK before moving on to Japan. Italy just reported another three cases, doubling its count from 3 to six. Will they be next? Maybe Africa?