The hijab and burkini have officially made their debut in the pages of Sports Illustrated Swimsuit.

In a series of social media posts Monday, the magazine unveiled some of its new swimsuit models, including 21-year-old Somali-American model and activist Halima Aden, whom the publication is touting for “making history” by being the first to ever wear the Islamic garb for SI Swimsuit.

The magazine posted a photograph of Halima on Monday wearing an electric blue burkini, which fully covers her arms and legs, as well as a multi-colored hijab covering her hair — garb designed to conceal women’s bodies in alignment with Islamic moral codes.

“Halima Aden makes history as the first model to wear a hijab and burkini for Sports Illustrated Swimsuit,” the publication tweeted Monday. 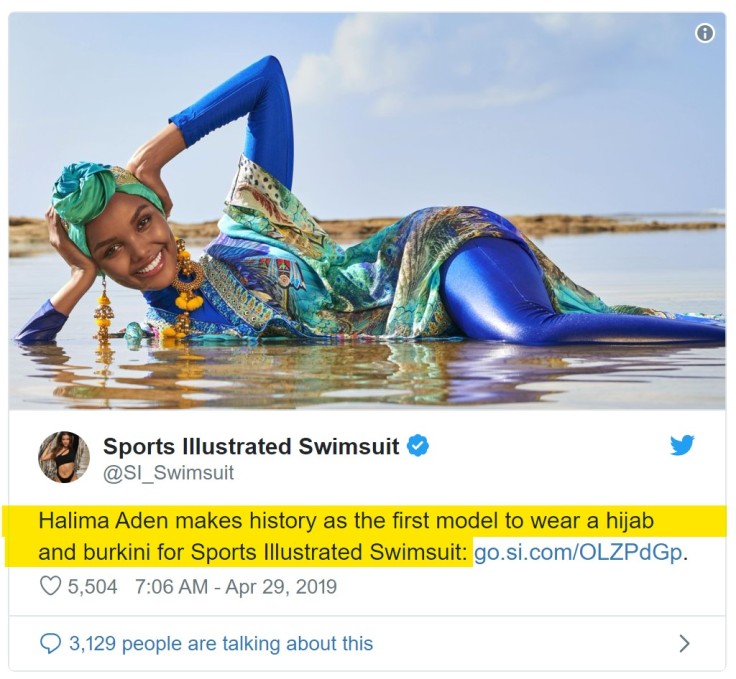 The magazine then retweeted a post by model Hunter McGrady touting the debut of Islam-inspired full-body coverings. “Once again, so proud to be a part of this incredible issue,” wrote McGrady.

Sports Illustrated Swimsuit also posted a video of Aden discussing her opportunity to wear Muslim garb for the magazine. “I never really felt represented because I never could flip through a magazine and see a girl who was wearing a hijab,” she said in a quote highlighted by the publication.

“I never really felt represented because I never could flip through a magazine and see a girl who was wearing a hijab.” #ShatteringPerceptions pic.twitter.com/EtNfpszcmy

In a press release, SI Swimsuit editor MJ Day emphasized that by including Aden in this year’s publication, the magazine is attempting to present an expanded “range and scope of the type of beauty that exists” and further affirm women’s individuality and self-worth.

“Having Halima as a part of SI Swimsuit is yet another example of the range and scope of the type of beauty that exists,” said Day, HuffPost reports. “Her participation and inclusion further highlights the brand’s commitment and belief in supporting women to own who they are and what makes them unique and ultimately reaffirms what our messaging has been, that YOU are worthy.”

“This feature is proving that a fully covered hijab wearing model can confidently stand alongside a beautiful woman in a revealing bikini and together they can celebrate one another, cheer each other on, and champion each other’s successes,” said Aden in a statement. “Young Muslim women need to know that there is a modest swimsuit option available to them so they can join the swim team, participate in swim class at school and go with their friends to the beach. Muslim girls should feel confident taking that step and doing so comfortably while wearing a burkini.”

Aden’s photoshoot was conducted in Kenya, where, as Page Six highlights, “she was born into a refugee camp and lived until she was seven years old.” The magazine features Aden in two different burkinis designed by No Ka’Oi and Cynthia Rowley, the outlet reports.

While the magazine is promoting the modesty-focused attire of Aden, it also continues to promote its more “traditional” swimsuits, like that sported by McGrady. “Hunter McGrady’s bride squad knows how to throw a bachelorette weekend!” SI Swimsuit tweeted in a post retweeted by McGrady.