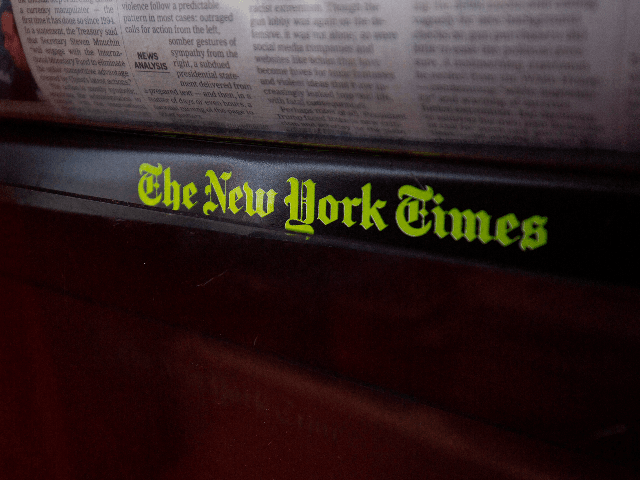 Another high level employee of the New York Times made racist, antisemitic, and disparaging comments on social media.

Jazmine Hughes, an associate editor of the New York Times Magazine, has made a series of racist and antisemitic comments on social media over a multi-year span. A number of the tweets came from Hughes’s personal account, which is associated with her Times email, after she was hired by the outlet in April 2015 and continued well into 2017.

Breitbart News has been able to confirm the authenticity of the tweets, which are still visible on Hughes’s page at the time of the publication of this story. While Twitter has not officially verified Hughes’ account, her official New York Times website biography links to the account, confirming it is in fact hers.

Hughes is a high-profile New York Times editor. Forbes highlighted her on its 2018 “30 Under 30” list of influential media figures. The business magazine even conducted a brief interview with her, where she promoted herself as a champion of “diverse storytelling,” in the words of Forbes.

Hughes is only the latest Times employee to be exposed for making controversial and racially offensive statements. In recent months the paper has been rocked by multiple instances of such behavior at its top editorial ranks.

Although most of the tweets center around every day interactions, a few have pointed to political overtones. Hughes appears to have been particularly irate with white people for electing President Donald Trump. Late on election night 2016, shortly after it became clear that Trump had won the presidency, Hughes took to social media to state she had not been so angry at white people since having  learned of Drake and Taylor Swift’s short but ill-fated relationship.

Another tweet that Hughes sent in the days following the election seemed to imply she blamed white women for Trump’s victory — an argument the Times itself made the morning after the election.

Hughes continued making disparaging tweets about white people and Jews well into 2017. Her most recent came in June 2017, when the editor claimed, “Jews are inDEED good with money.”

time and again i find myself reflecting on America’s only good white woman, Katie Ledecky

Even prior to joining the Times, Hughes had a history of controversial comments and writings. In February 2015, shortly before being hired by the Times, Hughes stated the “working title” of a piece she had just authored for the New Republic was, “What can take yr freedom, but can’t take a joke? White people.”

The article in question discussed what Hughes saw as the “gentrification” of humor at “white people’s expense.” Hughes argued that “racialized humor is an instrument that people of color can use to placate themselves in the face of the overwhelming reality: It’s just better to be Caucasian.”

“By making fun of white people, people of color can, in a small way, push back against stereotypes, opposing racial humor by inverting it,” Hughes wrote, claiming such jokes “gain membership in a club open to all people of color, a space impervious to white hegemony.”

The article’s premise is that as white people become more aware of systematic inequalities, they begin to make light of their privilege in an effort to sympathize with communities of color. In most cases, however, Hughes argued such attempts at solidarity only reinforce the status quo at the expense of people of color.

“This is how the party ends—with white people wanting in on the joke so badly that they create a separate category of ‘cool’ white people who mock their own whiteness in an effort at solidarity,” she wrote.

The article appears to be the only one Hughes authored for the New Republic. Since joining the Times, she has occasionally written pieces centered on the intersection of race and culture. Her most recent project for the Times’ magazine was the 1619 Project, a comprehensive series of articles and essays arguing that slavery was the institution that fundamentally shaped the modern United States.

The newspaper made a massive investment in the 1619 Project, through which it aimed to redefine America’s understanding of the history of slavery. Hughes was no small part of the newspaper’s work on this, as she was on the byline of one of two major feature pieces on the broadsheet print edition of the special.

“The broadsheet special section has two components: A reported essay by Nikita Stewart, a reporter on The Times’s Metro desk, examining why Americans are so poorly educated on slavery, followed by a history of slavery written by Mary Elliott, curator of American slavery at the Smithsonian’s National Museum of African American History and Culture, and Jazmine Hughes, a writer and editor at The Times Magazine,” the Times wrote about how its 1619 Project feature came together, highlighting the critical role that Hughes played in its publication.

It is unclear if the Times knew of Hughes’s prior controversial tweets before allowing her to undertake a project of such means. Representatives for the paper did not return requests for comment.

The revelation of Hughes’ tweets come shortly after the Times declared it intended to hone in on racial issues leading up to the 2020 presidential race. Those efforts, though, have been severely undercut by multiple revelations concerning the paper’s staff using racist, anti-Semitic, and generally disparaging comments.

Breitbart News reported in August that one of the outlet’s senior news desk editors, Tom Wright-Piersanti, had a history of making anti-Semitic and racist statements on his social media accounts spanning over years. Wright-Piersanti, who helps oversee the paper’s political coverage, apologized for the prior comments, but as of now is still employed by the Times even though the outlet is reportedly “reviewing next steps.”

Two other individuals associated with the outlet, a fact checker Gina Cherelus and a recent addition to its editorial board — Sarah Jeong — have also been exposed for making racist comments. Jeong, in particular, has denigrated white people in the past, comparing them to dogs.

All of these incidents and more have amounted to what Breitbart News’ John Nolte has described as a humiliating year for the New York Times, after a summer of public meltdowns and serious institutional mistakes.